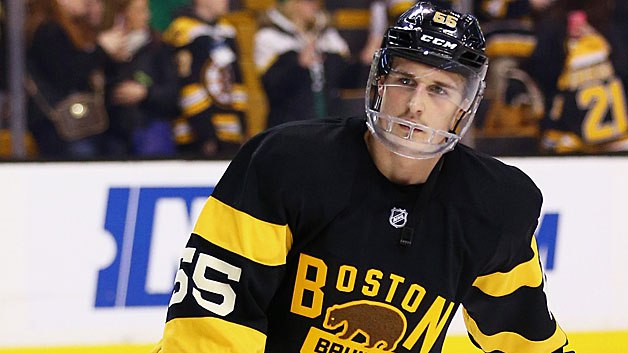 Last season Noel Acciari established himself as a solid fourth-line contributor. He appeared in a career-high 60 games and helped solidified the Bruins’ fourth line. He had a career-high 11 points including 10 goals, more than doubling his previous career high of 2. Acciari was a key contributor to the team’s fourth line, which was unexpectedly one of the team’s strengths. This coming season he will look to build on last year and again make the Bruins fourth line key to this team’s success. Last season he showed his scoring ability, but Acciari is valuable to the Bruins in many other ways.

The scoring output last season was surprising for Acciari, but his other contributions were not. Injuries have always been an issue for him and on opening night last season, he broke his left index finger blocking a shot. Although injuries are not uncommon for someone who plays with his style, he played with a sports hernia all season. Despite his injuries, Acciari still fulfilled his role perfectly during the 2017-18 campaign. He was fearless as he blocked shots and sacrificed his body with little hesitation. His tenacity and physical style of play allowed him to earn a role on the fourth line. Next season he will be looking to build on last season’s success.

What made Acciari successful was his physical style of play as he finished second on the team in even-strength hits with 152. He only had nine penalty minutes which is impressive for someone with his style of play. He was dependable and reliable as he has always been. His goal this season will be to avoid the injuries that have plagued him so far in his career. In his first three seasons, he has missed at least 20 games a year due to injuries. He is still recovering from sports hernia surgery but is not expected to miss significant time. The Bruins focused on improving their depth this offseason. As a result, Acciari will have competition in the form of Chis Wagner and Bruins prospects looking to prove themselves.

ICYMI: I talked to #NHLBruins Acciari about honeymoons, Jordan Spieth and his comeback from sports hernia surgery https://t.co/At8YWUpkiD

He will not only be motivated by competition but by the fact that he will be a free agent after this season. Acciari will most likely not command a monster deal. Another solid season could see him get a deal similar to what Tim Schaller got from the Vancouver Canucks. His main concern will be this upcoming season and helping the Bruins win a championship. He is a player any team would love to have and after last season’s disappointing ending he will only be more motivated. Along with his linemate from last season, Sean Kuraly, the Bruins’ fourth line should again be a force on a team with high expectations.