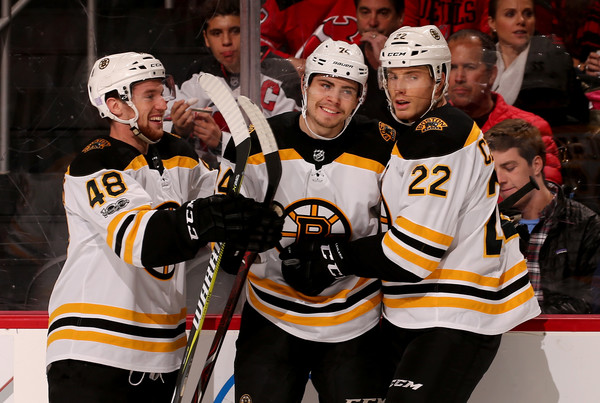 Coming into the offseason, Peter Cehlarik had a lot to prove with a roster spot on the line. The Bruins selected him in the third round of the 2013 NHL Draft, making him their second pick of the draft. He has yet to make a significant impact 6 years after being drafted, and other prospects pass him on the depth chart. Over the past two seasons, Celharik has had multiple opportunities and appeared in 17 games at the NHL level. He has shown major improvements and been a pleasant surprise for the Bruins.

If Cehlarik does make the Bruins team, he will most likely be placed on the third or fourth line. His competition includes Ryan Donato, Trent Frederic, and Anders Bjork. Of those three, Donato is the only lock to make the team after a brief but impressive 2018 NHL debut. Cehlarik has shined in his own right this offseason as he faces a crucial point in his NHL career.

In the preseason, the former third-round pick has one goal and three assists showing his offensive skill. During the Bruins’ 4-3 victory over the Flyers on the Sept. 24, his play along the boards impressed Bruins coaches including a play where he forced a giveaway that led to a Lee Stempniak goal. This showed his growth, but for Cehlarik the key for this upcoming season will be his health.

Cehlarik made his NHL debut during the 2016-17 season, appearing in 11 games. He was impressive in that short stint but had his season in Providence cut short due to his health. Last year injuries slowed him again, and he only appeared in 35 games for Providence after appearing in 45 the season before. He did appear in five games for the Bruins, but he did not make much of an impact as the Bruins rose to the top of the Eastern Conference. He is finally healthy and making the most of his opportunity.

icymi (my 2nd promo for this story): Peter Cehlarik survived the latest round of #NHLBruins cuts and he's making it difficult for the team to cut him …https://t.co/rPiI0ZE4Gp

Additionally, Cehalrik is versatile, which allows him to play on either the left or right wing. He has shown his offensive potential and improved his play along the boards. The former third-round pick has created turnovers of his forecheck this preseason but struggled between the blue lines. He has to pick up the pace especially in the neutral zone and be more careful with the puck. That will be his main focus this season. If Cehlarik can do that, he could make it hard for the Bruins to deny him a chance

Peter Cehlarik pounces on the rebound off a Lee Stempniak shot and scores. Matt Grzelcyk with the other assist on the tally. pic.twitter.com/OnYtBdKV6k

Nonetheless, The Bruins open their season in less than a week against the Washington Capitals. They will watch the Capitals raise their championship banner, which will only motivate this young team. It is still a long shot that Cehlarik will be there; however, he has been nothing short of impressive. Even if he does not make the team, he will be a more than capable fill-in during the season or possible trade chip. He has put himself in a position to be successful and opened eyes before the start of the 2018-19 season.