Bruins Prospect Studnicka Sent Back To The OHL 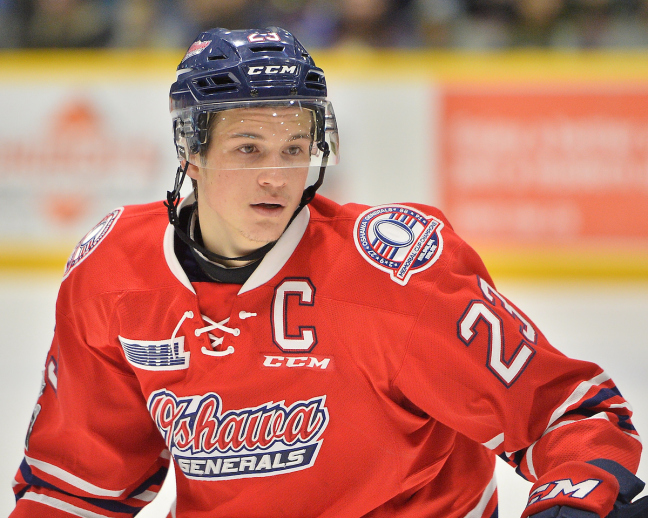 The Boston Bruins announced earlier today that the club has returned highly touted forward prospect Jack Studnicka to the Oshawa Generals of the Ontario Hockey League. The 19-year-old center spent a majority of his time during the summer offseason participating in Bruins events (such as Development Camp, Rookie Camp/Prospects Challenge) and showcased his skills to the Bruins brass for the B’s main camp before being cut today with two preseason games remaining in the exhibition schedule.

Although it may not be a popular move from B’s fans that believed he was ready for third-line duties down the middle for the upcoming 2018-19 season, his placement back to the Canadian Major Junior ranks made sense for both sides. First, Jack is unable to report to the American Hockey League due to the agreement between the CHL and NHL that states any player under the age of 20 either makes the jump to the big leagues or has to be returned to his junior program. Second, the Bruins might believe that third line center spot should be a competition between two players higher in the depth chart — like prospects Jacob Forsbacka-Karlsson and Trent Frederic, who will get considerable looks tonight against Detroit and Saturday against Philadelphia.

Studnicka plays a strong two-way game and is extremely intelligent in all situations, which are important attributes as he continues to develop. The 6-foot-2, 179-pound forward was selected by the Bruins in the second round (53rd overall) of the 2017 NHL Entry Draft and has played with the OHL Generals since the 2015-16 campaign. In 192 career OHL games with the Generals, the talented center contributed 44-106-150 stats and last season as a first-year team captain posted career numbers with 22-50-72 totals in 66 games. After his 2017-18 commitment was over with the second-round elimination in the OHL playoffs by the Niagara Ice Dogs, Captain Jack reported to the AHL’s Providence Bruins and appeared in five regular season games posting 1-4-5 numbers.

The Bruins signed Studnicka to a 3-year entry-level contract exactly one year ago today after he impressed B’s management after working hard during team offseason events and training camps in 2017. Below is a scouting report provided by Dominic Tiano, who covers the Ontario Hockey League for the OHL Writers website.

“Studnicka has good size – although adding bulk will be key for him. He is an excellent skater who has an explosive first step and decent top end speed who can change direction with ease. He possesses very good vision with high-quality playmaking skills with an ability to set up his teammates. His shot is underrated in my opinion. His release is deceptive and accurate and he puts every shot on goal with a purpose. Studnicka can be elusive in the offensive zone. He can break away from coverage almost undetected and put himself into scoring positions. He has very good puck skills and strong possession skills. Although he needs to add some muscle, he will not shy away from the hard areas. Once he gets stronger, it will become an area where he wins more often than he loses because of it – and his work ethic.” – Dominic Tiano