Bruins VS Caps: How Did The Forwards Perform? 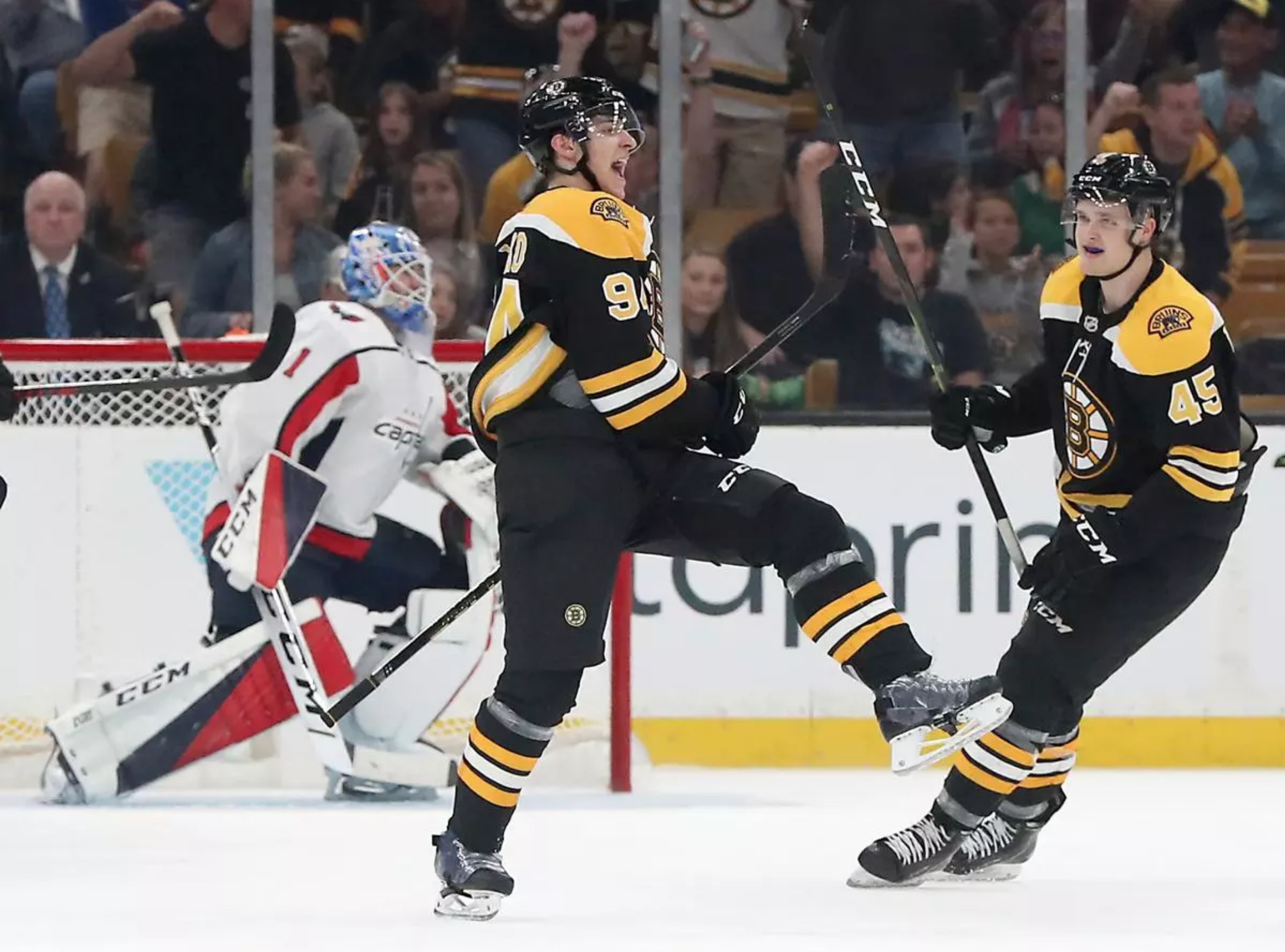 On the surface, Sunday’s preseason game against the Washington Capitals was just that, a preseason game. For the fans, it’s a sign that opening night of the NHL’s regular season is inching that much closer. For the players, it’s an opportunity to impress the coaches and win a spot in the lineup when the puck drops on a brand new season in a few weeks. Going into this year’s preseason matchups, a majority of the Bruins’ roster has already been decided. However, there are some spots available, as well as a number of possible combinations throughout the lineup that the coaches want to test out. In this article, I’ll be taking a look at the performance of the forwards in the opening matchup of the Bruin’s domestic preseason.

Sunday’s matchup with the reigning Stanley Cup Champion Washington Capitals at the TD Garden in Boston was a prime opportunity to do just that. With many of the Bruins’ regulars overseas for the O.R.G. NHL China Games, many spots were given to young prospects, allowing them to strut their stuff. Before getting into the nuts and bolts, here’s the full highlight reel in case you weren’t able to catch the game:

🎥 Check out the full highlights from the Bruins 2-1 shootout victory over the Capitals: pic.twitter.com/QkrCglDkno

A couple young guns on the offensive side of the puck stood out in particular; 2018 3rd-round draft pick Jakub Lauko, 2015 15th-overall pick Zach Senyshyn, and 2013 4th-round pick Ryan Fitzgerald. Of those players, Lauko showed the most prowess throughout the game. A very fast player, he was able to consistently use his speed to get up and down the ice and create space. For a guy who’s main focus would be scoring goals, he was solid on defense as well, making the sacrifice and putting himself between the puck and the net on multiple occasions. He took one shot off the leg later in the game right at the point and despite feeling quite a bit of pain finished his shift. Not all of his plays will show up on a highlight reel, but the most important of all certainly did. Take a look at the Bruins’ only regulation goal from the game:

The most promising part of this entire play isn’t the end result, but the effort and skill put in to make the play. First off Lauko does a solid job picking the puck up in the slot and maintaining possession while surrounded by Capitals defenders. He doesn’t give up on the play after his first shot attempt gets blocked down; he corrals the puck and rips a quick wrister through the defenseman’s legs to put the Bruins on the board. It’s clear he knows how to celebrate and enjoy his time on the ice too. That kind of jam, as one Bruins announcer Jack Edwards would say, is what coaches look for in young players. Lauko’s skating and scoring ability matched with his willingness to fight for the puck and put his body on the line could have him wearing the black and gold sooner than most might think. Lauko himself certainly agrees, here are his thoughts on his performance:

"I'm trying to stay here. I'm giving everything for that."

🎥 The youngster @jakub_lauko discusses his exciting first content with the Black & Gold: pic.twitter.com/HuQCFS7kMN

Fitzgerald’s performance didn’t result in any goals or flashy highlights, but he meshed well on a line with David Krejci and Danton Heinen throughout the entire game. While they weren’t able to convert on any of their scoring chances, they certainly had a good number of them. There were multiple instances in the second and third periods where the Bruins were able to hold the Capitals in their own zone for at least 90 seconds — even 2 minutes at one point.

Fitzgerald fit well in the offensive cycle, took advantage of his opportunities and got the puck toward the net. Most notably is the pass he made to a streaking David Krejci in the opening period in the above highlight reel. Krejci was thwarted, but nonetheless, it was one of the Bruins’ best scoring chances the entire game. Senyshyn also had a strong scoring chance later on in the first period on a rebound from an Anton Blidh breakaway. Senyshyn certainly wanted to make an impression on the Bruins coaches when he dropped the gloves with Tyler Lewington in front of the Capitals’ net. He’s definitely feeling pressure from the other young guys in the system and is looking to be in the conversation when it comes to final roster spots or injury call-ups.

Now for the more established players — the likes of David Krejci, Danton Heinen, and Daniel Winnik. It’s a known fact that Krejci will center the Bruins’ second forward line, but his linemates have been in question all summer. Most likely Jake DeBrusk will retain his spot on the left wing from last season. Danton Heinen looks to move up to the right flank of Krejci in his sophomore season. The pair seemed to have strong chemistry, linking up to create multiple grade-A scoring chances. Heinen was also given the chance to show off his own individual skills at the start of the shootout. Here’s the silky smooth play where Heinen had the puck on a string:

Heinen undoubtedly has the skill and hockey IQ to play on Krejci’s wing for this coming season. If he does, he most certainly will improve on his point totals from last season (16 goals, 31 assists, and 47 points in 77 games). Given more time together throughout the remainder of the preseason, Heinen could win that spot. This would allow Bruins head coach Bruce Cassidy to keep the dominant top line from last season of Brad Marchand, Patrice Bergeron, and David Pastrnak together. That line with a DeBrusk-Krejci-Heinen second line would provide strong scoring throughout the top-six and a lot of flexibility in the bottom-six. Assistant coach Joe Sacco had this to say on the Krejci-Heinen combination as well as Lauko and defenseman Axel Andersson’s performance:

"The two of them, for young kids, they played well tonight…Getting off to a good start for their first game."

🎥 Assistant coach Joe Sacco discusses the play of Lauko and Andersson, and the chemistry between Heinen and Krejci. pic.twitter.com/1TonMWctOU

Further down in the lineup we find NHL veteran Daniel Winnik who’s been invited to camp on a professional tryout (PTO). Winnik’s been playing in the NHL for over 10 years and has played on eight different teams, playing in 798 career games. He consistently has put up 20-30 points and been a strong bottom-six forward throughout his career. It’s a smart pickup by the Bruins who we’ll likely see getting significant NHL time this year, especially if injuries hit the forward corps as they have in the past few years. Cassidy and the Bruins have a lot of options in front of them at the moment ranging from young prospects just getting their first taste of NHL action to veterans with years of regular season and playoff experience under their belts. The lineup for opening night against the Washington Capitals on Oct. 3 is an unknown at the moment, making for an exciting run up to puck drop.