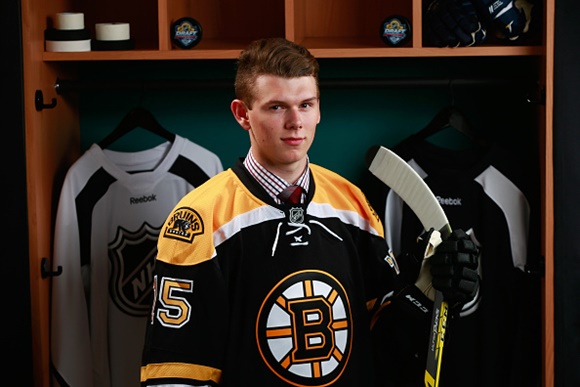 The Boston Bruins took the ice against the reigning Stanley Cup champions at TD Garden on Sunday afternoon in a preseason matchup. While the majority of the Bruins’ NHL starters found themselves overseas for preseason competitions in China, the team in Boston was able to showcase a number of their up-and-coming prospects.

Zdeno Chara was Boston’s only NHL regular along the blue line, which allowed the likes of Jeremy Lauzon, Connor Clifton, and Axel Andersson to get some time in the spotlight. The Bruins’ defensive core for their game against the Washington Capitals was effective despite their inexperience.

Boston’s 2018 second-round pick is well known for his speed and ability to produce points. Last season, as a member of Djurgardens IF J20 of the SuperElit league, Andersson registered six goals and 25 assists in 42 games. The Swede had plenty of promise and displayed that on Sunday.

6-foot-1 Andersson was paired up with 6-foot-9 Chara when the puck dropped to signify the beginning of the 2018-19 campaign. The Jarna native quickly showcased his confidence with the puck and was able to create a number of opportunities for Boston’s forwards. In fact, Andersson inked the sole assist on Jakub Lauko’s first-period goal. He kept the puck in the offensive zone, side-stepped an oncoming Capitals forward, and got the puck to an open forward — what more can you ask?

As the youngest Bruin on Sunday afternoon’s roster, I was impressed by the Swede’s ability to stay poised along the end wall and wrap the puck around to his defensive partner to spark a transition. During an oncoming rush, Andersson was able to stand his ground. On the occasions that he was beaten by an opposing forward, he was quickly able to recover and keep his man from getting to the hash marks. Andersson gave the Bruins plenty of reason to hand him 21:26 in time on ice.

Lauzon and Clifton found themselves together on the second defensive pair. It was a very versatile duo, each countering each other’s weaknesses. Clifton, who tallied a goal as a right winger in the Prospects Challenge in Buffalo earlier this month, was not afraid to skate the puck into the offensive zone. He also never seemed to shy away from physical play, dishing out one of the biggest hits in the game.

Clifton was also strong along the boards and was able to win a number of 50-50 pucks in Boston’s defensive zone. Like Andersson, if Clifton was beaten, he was able to get back into position to thwart a clean scoring chance.

Lauzon, on the other hand, played a more stay-at-home game. He was strong along the boards as well, but most notably stayed solid in front of his own goaltender when guarding the slot. He didn’t see the opportunity to skate the puck through the neutral zone all too often but did receive time on Boston’s power play.

The 21-year-old showed the poise of a power play quarterback when given the chance. He registered two shots on the man-advantage and another two at even strength. Lauzon displayed nice hands when moving the puck along the blue line sending it deep into the zone to a winger. This was an encouraging sight considering Lauzon registered just a goal and six assists in 52 games last season — his first with the Providence Bruins. Other than Chara, Clifton and Lauzon led Bruins defensemen in ice time with a tally of 22:35 and 22:22 respectively.

Bruins 2014 seventh-round pick Emil Johansson also got some time along Boston’s blue line. He was paired with Mark Fayne for the preseason bout with the Capitals.

The 6-foot, 189-pound defenseman played a similar game to Andersson in terms of his mobility and abilities with the puck on his stick. He soaked up 17:19 in ice time, with 2:59 of that coming on the penalty kill. While the majority of Johansson’s 22 shifts hovered around a length of 45 seconds, on six occasions he was caught on the ice for over a minute and remained solid despite his energy draining.

The Swede was even given the responsibility of logging time during the 3-on-3 overtime which quickly turned into a 5-on-3 man advantage for the Capitals. It was here where Johansson really proved his worth of not only being able to carry the puck but also be able to help kill crucial and daunting penalties.