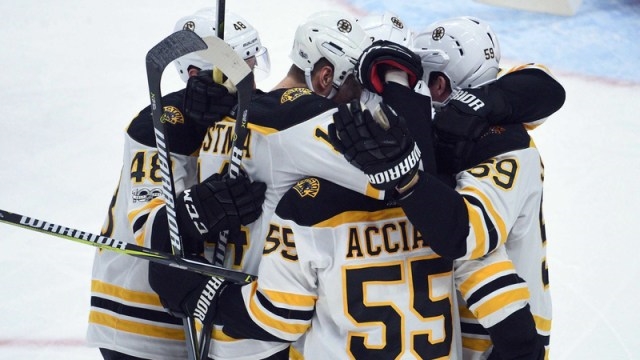 Last season the Bruins’ fourth line was one of the most productive in recent memory. They drew comparisons to the Bruins’ fourth line in 2011, which was key in their Stanley Cup run. This offseason, the Bruins lost Tim Schaller in free agency as he signed with Vancouver. He was one of the key contributors on the team’s last line. Noel Acciari and Sean Kuraly are projected to return to the fourth line, leaving an open spot on the wing. How that spot is filled has yet to be determined, but the Bruins do have a couple of options.

Since that magical 2011 season, the Bruins had failed to find a fourth line pairing that was as successful as the “Merlot Line.” Last season proved to be an exception as the trio of Kuraly, Schaller, and Acciari became fan favorites. They endeared themselves to Boston with their gritty and energetic style of play. Whenever the Bruins needed a jolt or change of pace, the fourth line often was whom Cassidy called on. They were unexpectedly productive offensively as of the trio only Sean Kuraly scored less than 10 goals. They will look to make the same kind of impact even with the loss of Schaller in free agency. Whoever replaces him will be filling a key role.

Fortunately, the Bruins have multiple players who could fill the vacant spot on their last line. Those options include Chris Wagner and Joakim Nordstrom. They both bring their own unique characteristics to the Bruins and would be good fits in Schaller’s spot. The Bruins signed Wagner, a Massachusetts native, to a 2-year deal earlier this offseason. He is not known for his offense, but he was able to record 16 points last season. Wagner made his impact with his physical style of play and finished third in the NHL with 235 hits last season. He can play both the center and wing, which gives the Bruins flexibility. He brings a similar blend of offense and physicality like Schaller. The fact that the Bruins gave Wagner a multi-year deal shows how much the Bruins believe in him. However, he will have competition in the form of another Bruins free agent signing in Nordstrom.

Comparatively, Joakim Nordstrom is not a physical player like Wagner. He is a smart player who is good at reading plays and disrupting breakouts. He can be frustrating offensively, which limits his upside. He has been a good enough penalty killer to stick around in the league. Nordstrom had a knack for getting to the net but struggled to finish last season which is partly why he will end up in a bottom-six role. Where he ends up will be interesting as it could be on the third line. After a solid 2017-18 campaign, Kuraly could be bumped up to the third line. This would mean that Nordstrom could center the fourth line with Wagner on the wing. Wherever Nordstrom ends up will have a significant impact on the Bruins’ bottom lines.

NEW POST: What will Joakim Nordstrom's role be with the #Bruins? https://t.co/uIRMHwNV3B

Last season the trio of Kuraly, Schaller, and Acciari showed how important the fourth line could be. Even with the loss of Schaller, the Bruins have good replacements. They will need to step and be counted on in big moments. Whoever ends up on the Bruins fourth line will have the responsibility of continuing last season’s success. It will be a key storyline to watch as these players will look to replicate the same grit and energetic play that made the Bruins fourth line so successful last season.