What To Do With The Bruins Second Line 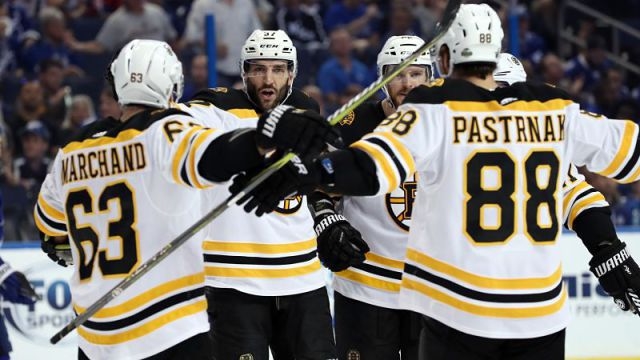 In a little over a month, the Boston Bruins 2018-19 season will begin. The team will be looking for revenge after a disappointing exit in the playoffs last season. One of the reasons they were eliminated was their bottom lines’ inability to score. Other than the Bruins top line — which is arguably the best in hockey — the Bruins did little offensively. This has lead to speculation that the Bruins may be better served to break up their top line to spread out the scoring. One possible solution could be moving David Pastrnak to the second line with David Krejci and Jake DeBrusk. This is a move that could work for multiple reasons.

Krejci and Pastrnak have experience playing together which could make this an easy transition. The Bruins began last season with Pastrnak on the second line. He would make the Bruins’ second line very dangerous because of his skill set. His creativity and scoring touch would play well alongside Krejci and DeBrusk. Each trio has their own unique characteristics that make them dangerous in the offensive zone. Breaking up the Bruins top line is not an easy idea to consider given how good the trio was last season. It may, however, be the best thing for this Bruins team.

Like Pastrnak, Krejci relies on his creativity and vision on the ice. DeBrusk is the opposite as he relies on grit. Last season DeBrusk showed that he would sacrifice his body for the puck. That plays well with Krejci and Pastrnsk who will use their creativity to put pucks on the net. Krejci has also shown he could play well with DeBrusk and Pastrnak, which is big considering how the Bruins have struggled to find the NHL veteran linemates he plays well with. DeBrusk showed last year he can be a 20-goal scorer, and Pastrnak has had 30 goals each of the last two seasons. With Krejci feeding both of them, those numbers would only be better. It will also allow the Bruins to groom one of their younger talented players.

By taking Pastrnak out of the first line, the Bruins could place Anders Bjork in his spot. Bjork can play both ends and relies on his speed and creativity. Both are similar qualities to the guy he would be replacing. It would allow Bjork to improve his game while learning from Bergeron and Marchand. Bjork may not become the next Pastrnak, but it is an exciting comparison. Learning from arguably two of the best players in the NHL would only make him better. The Bruins have many players they could use in this spot such as Danton Heinen. Bjork may be the best option because his playing style is so similar to Pastrnak.

The Bruins will experiment with their lines early on. Where everybody ends up will be determined by performance. They already have one of the best lines in hockey but last year that was not enough. This combination could give them two very formidable lines and improve their depth. This will be one storyline to watch in a season with high expectations.