Boston Bruins: First Line Is Great, But Where Is The Depth? 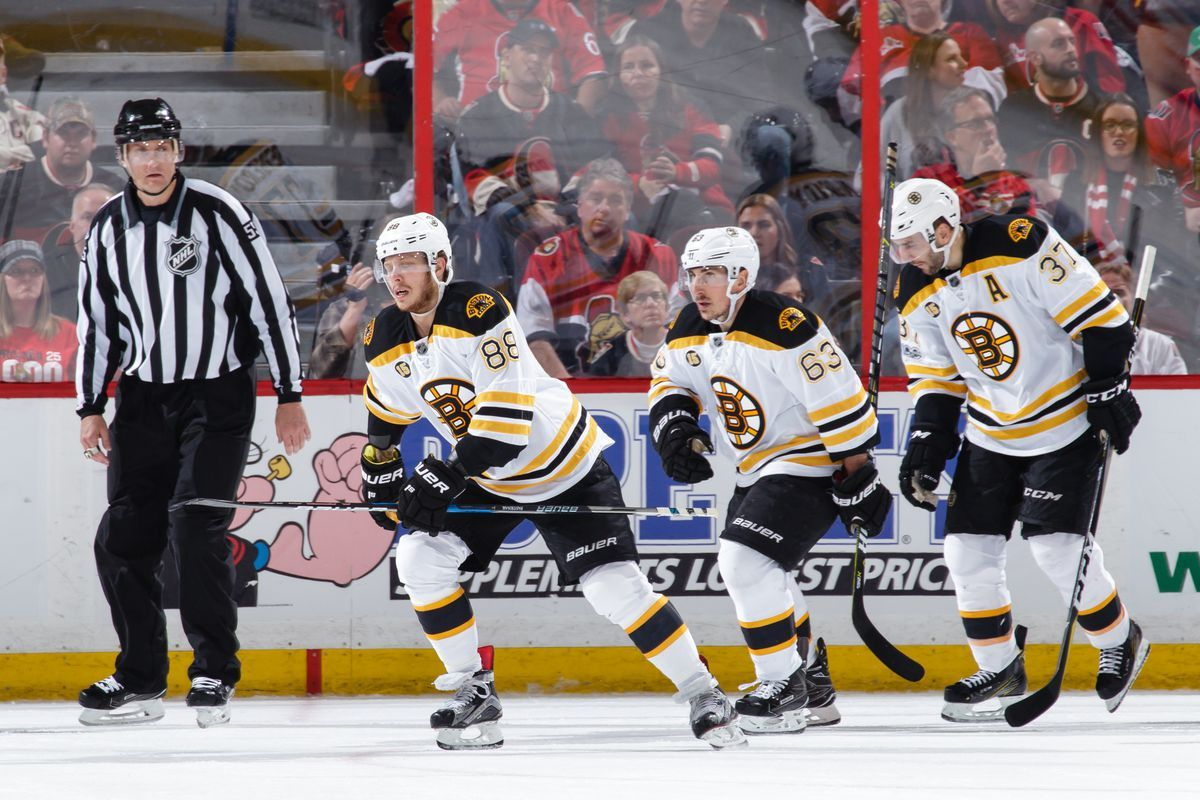 The Boston Bruins are still very early on in the 2018-19 NHL regular season, but it is never too early to pick apart some issues early on to see if they will get remedied as the season moves forward.

One of the biggest struggles for the Bruins that dates back to the Eastern Conference Quarterfinals last year against the Toronto Maple Leafs and especially against the Tampa Bay Lightning in the subsequent round is the lack of scoring from the second, third, and fourth lines.

Before we dissect the bottom-nine forwards on the Bruins roster, we need to address that their top line of Brad Marchand, Patrice Bergeron, and David Pastrnak was and remains to be one of the best lines in the entire NHL. The trio racked up a total of 228 points during the 2017-18 season and another 53 in the postseason.

The chemistry that the three of them have is unmatched and they seem to have a great mind of each other’s games. Bergeron, as we know, is one of the league’s best defensive forwards and will most likely go down with that title when he one day retires from the game. His work on the defensive side of the puck allows his other two linemates to reap the benefits of the ensuing scoring opportunities.

Brad Marchand, aside from his occasional antics, is one of the top goal-scorers in the NHL. Although he was not one of the highest point-producers in the league, he was fourth of all NHLers this past season for highest point-per-game average, tied with Nikita Kucherov of the Tampa Bay Lightning with 1.25 points-per-game.

David Pastrnak played in all 82 games last year for the Bruins, hitting a career-high of 80 points. Pastrnak had 35 goals and 45 assists, 26 of those points coming on the power play. Pastrnak is only 22 and is guaranteed to be on the Bruins roster for another five seasons unless the Bruins decide to trade him, which seems highly unlikely.

The Bergeron line has continued its success from the past season, scoring a grand total of 18 points in the first three games. Brad Marchand leads the way of the three players with seven points, all assists, followed by six points for Bergeron and five for Pastrnak.

The whole roster was held quiet in their first game of the new season after a 7-0 loss to the Washington Capitals that most fans would like to already forget about. The very next day, Boston rebounded with a 4-0 shutout in Buffalo on Thursday night. Marchand assisted on all four goals, including three primary assists on the Chara, Donato and Bergeron goal.

Speaking of Bergeron, he had a two-point night in Buffalo, scoring a goal and helping out on Ryan Donato’s first goal of the season. David Pastrnak had a “measly” one-point game, scoring the third goal of the contest in the second period.

Boston was looking to translate that success into Monday’s outing on home ice against the Ottawa Senators. The Senators were coming off of a surprising victory against the Toronto Maple Leafs on Saturday night and had some solid momentum with players such as Thomas Chabot leading their team.

But once again, Boston’s first line was unmatched by Ottawa. The same three players that we’ve been talking about so far racked up 11 points, including a hat trick by Patrice Bergeron.

The line of Jake DeBrusk, David Krejci, and Ryan Donato that have played together for the last two games have a combined two points — a goal by Donato and an assist by Krejci. It could very well be a matter of patience when it comes to dissecting the problem here. Against the Senators, Krejci and DeBrusk had some solid opportunities to bury a goal or two but were stopped by either Mike Condon or a defenseman on the Sens. 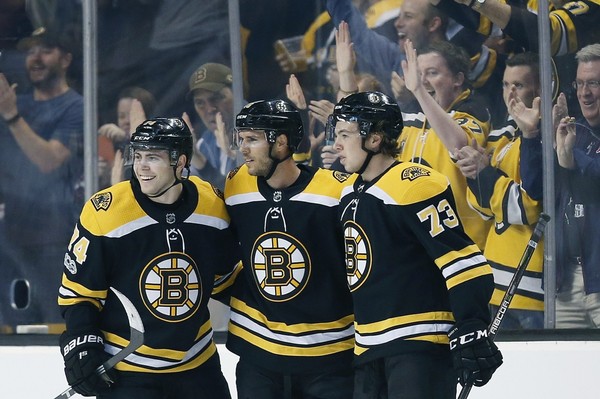 Should the Bruins write off the second line, make a trade, and revamp the whole top-six? Of course not — at least not right now. The season is extremely early and it is at this point of the season that you need to find that chemistry and carry it forward to the middle and late stages of the regular season – into the playoffs.

During the 2018 Stanley Cup Playoffs, Krejci and DeBrusk were both nearly at a point-per-game average, mainly due to the impressive performance by DeBrusk in Game Seven of the Eastern Conference Quarterfinals against the Maple Leafs, where he scored two goals, including the eventual game-winning tally in the third period.

When it comes to the second line, I think the DeBrusk, Krejci, Donato combination could be a serious threat if they can find their chemistry as a trio. If so, it would allow Marchand, Bergeron, and Pastrnak to stay together on the first line as it was an idea to send Pastrnak to the second line in an attempt to spread out the scoring. I will be the first to admit that I would be in favor of Pastrnak on the right side of Krejci, but I would much rather him with Marchand and Bergeron if Krejci, DeBrusk, and possibly Donato can carry their weight effectively.

Without a doubt, it would be better for that line to start producing sooner rather than later as those three forwards were the only three forwards on the Bruins against Ottawa who finished with a minus rating.

Now the third line. Every game so far has seen a change or two when it comes to the third offensive line. Against the Washington Capitals last Wednesday, the Bruins ran with Donato on the left-wing, Kuraly down the middle and Backes on the right-wing. That line combination managed to finish all with an even +/- rating, in a game where seven goals against were allowed. They all had one shot each as well.

Head Coach Bruce Cassidy changed the line up heading into their meeting with the Buffalo Sabres, going with the line of Heinen-Kuraly-Bjork. Anders Bjork made his season debut against Buffalo and even though back in the offseason he was rumored to join the top-six, he played on this third line. Kuraly had a 54% on the faceoff dot, but only two of the three forwards recorded a shot on goal.

Finally, in the most recent game against Ottawa, the Bruins decided to play David Backes at his natural position, centering Heinen and Bjork. While watching the matinee game, I was impressed by how that line managed to find their groove somewhat and get some decent scoring opportunities. 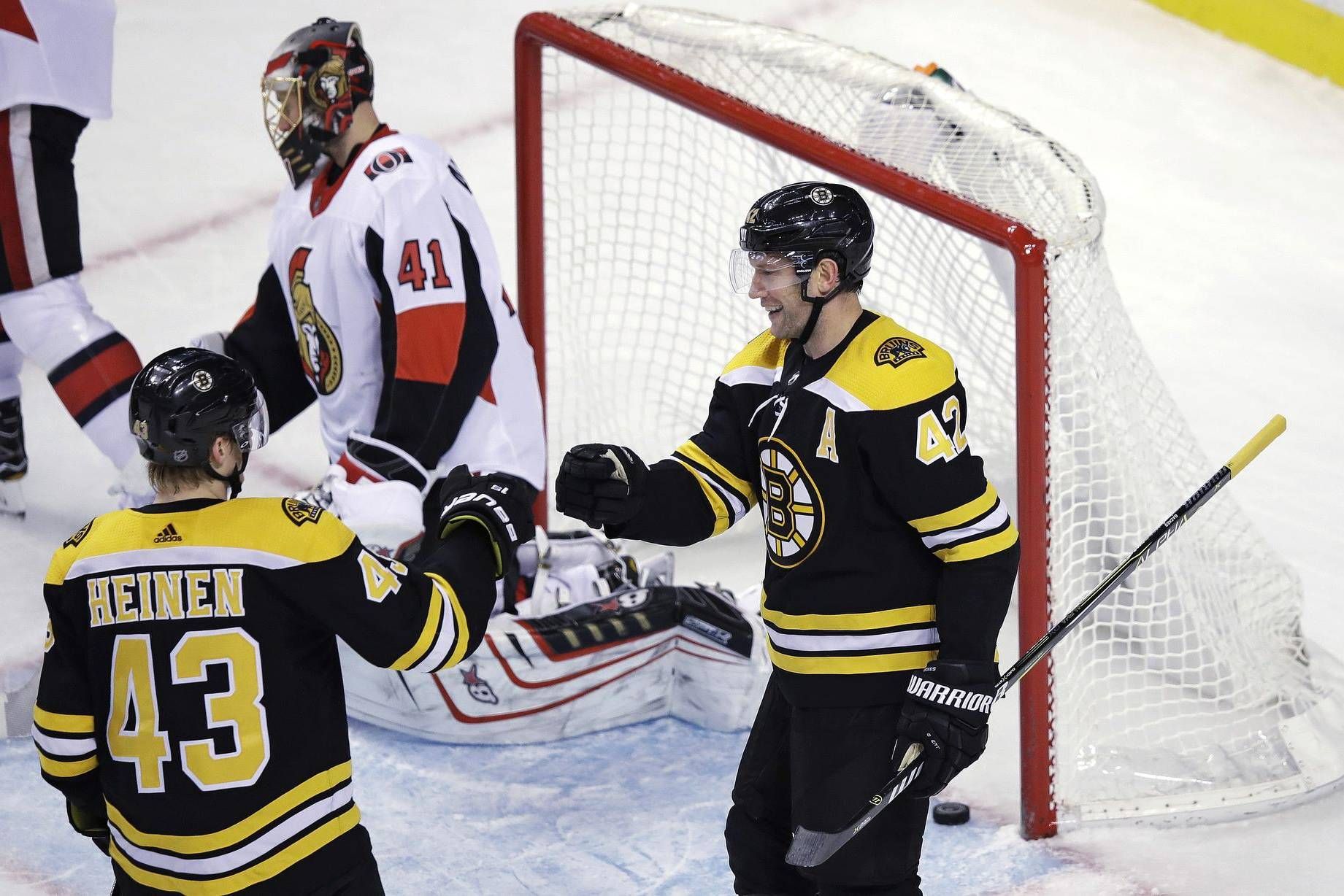 Danton Heinen failed to record a shot on Senators goaltender Mike Condon, but Backes hit the net twice and Bjork once. While the stats may not quite be on their side early on, I did like the effort all three of them put in. It could be a solid line going forward, especially if they can remain healthy.

The fourth line is one of those pieces that has looked good for the Bruins in the past year or so. The Bruins lost Tim Schaller to free agency this past offseason, meaning a valuable bottom-six player was off the team. Noel Acciari and Sean Kuraly are still on the team and they were two-thirds of the line that played against the Senators Monday afternoon. Chris Wagner, one of the 2018 free-agent acquisitions, rounded out the line, scoring the third goal of the game for Boston.

The fourth line alone had five shots on goal, three of which from Acciari. Acciari also had a great chance on the 5-on-3 penalty-kill, getting a breakaway that was shut down by Condon. Not to mention a big hit in the offensive zone. The line, in general, had a great work ethic and I enjoyed watching them on the ice as a unit.

Essentially, it is not a time to panic about the depth Boston fans. We are indeed only three games into the brand new 2018-19 NHL season and the Bruins just happen to be opening up the season with some weaker teams on the schedule. After meetings with Buffalo and Ottawa, the B’s will meet the winless Oilers, the 0-2-1 Red Wings, then a back-to-back against the Flames and the Oilers on the 17th and 18th of October.

By then, the roster should hopefully have been rounded out with every line producing at a higher rate then they are now. Boston took Tuesday off from practices and they return to Warrior Ice Arena for a Wednesday practice according to Ty Anderson of 98.5 The Sports Hub.

Bruins will have tomorrow off. Back to practice Wednesday at Warrior.

Boston’s next game is on Thursday, Oct. 11against the Edmonton Oilers in the TD Garden in Boston.