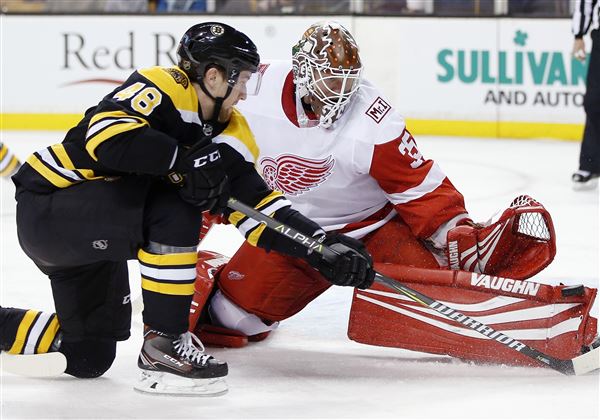 Earlier today, the NHL announced that this coming Saturday, Oct. 13 game between the Boston Bruins (2-1-0) and the Detroit Red Wings (0-1-2) will be rescheduled. The NESN crew will have Saturday’s game.

Originally set to start at 7:00 PM ET, the game will be rescheduled to 3:00 PM ET to prevent conflict with Game 1 of the MLB’s American League Championship Series (ALCS) between the Boston Red Sox and the Houston Astros, which gets underway at 8:09 PM ET. Now both games can take place independent of one another. It’s good to see the league getting on this schedule change so quickly, as the American League Division Series (ALDS) just ended late last night.

Standing in the middle of a three-game home stretch for the Bruins are the Edmonton Oilers (0-1-0), tomorrow night at 7 PM. Monday presented a 6-3 victory, in part thanks to a hat-trick from Patrice Bergeron in the home opener for the 2018-19 Bruins season against the Ottawa Senators. Fellow BnG colleague Max Mainville had the recap in that big first home victory, among other BnG content from Monday’s game.

Despite some different looking rosters in the preseason for both teams, it hasn’t been long since the Bruins, and Red Wings last squared off. September 22 and September 26 both saw some overtime action between the Bruins and Red Wings, with the Bruins losing in both contests. With the preseason in the past, the Bruins will look to start off a season series with their divisional foes from Detroit on the right foot on Saturday. Last season, the Bruins won all four of their games against the Red Wings en route to the earning the second seed in the Atlantic Division.

The Red Wings have a divisional clash standing in their way, as they take on the Toronto Maple Leafs tomorrow night at Little Caesars Arena.

Nordstrom gets a look with Krejci and DeBrusk

After being scratched for Monday’s home opener, Joakim Nordstrom saw some time on the second line right-wing, along with Ryan Donato at practice today.

As one of the newer guys in the fold, establishing some familiarity with different players throughout the forward core is a good thing. Potential unexpected absences in the lineup and/or injuries can force lineup shuffling into action. Whether Nordstrom on the second line lasts long or not, using practice time to see if there could be a fit is a smart move. Head coach Bruce Cassidy seems fairly certain that Nordstrom will return to action tomorrow night.

Cassidy (cont): "It may be Ryan [Donato] that comes out…part of that is just understanding the details of the game every night. We’ve done that with every young player last year, so that would be no different."

On what this means for Ryan Donato, Cassidy is approaching his situation with an open mindset like last year. Despite a productive start to his Bruins career last season and into this one, there are always different things to learn as a 22-year-old professional hockey player like Donato. Jake DeBrusk, Danton Heinen, and Matt Grzelcyk are a few guys who can attest to this.

After scratching Jake DeBrusk in November of last season, Cassidy had a lot to say. “The message to him was watch a game from up top. There are certain areas of your game that need to be better, and there are certain areas of your game that we like and need to be there every night. We talked about his energy and his legs. If he’s skating then everything else seems to fall into place for Jake, so that’s what we’re looking for.” While Donato brings plenty to the table and is already a valuable part of the team at a young age, watching the game from up top allows players to analyze things from a different point-of-view. Things have gone pretty good from Jake DeBrusk since then, a game off early in the regular season could very well do the same for Donato.

There is still some time before tomorrow night’s game for Cassidy to decide on whether he wants to go through with this move or not. Regardless of the outcomes of each game, Saturday’s going to be quite the day in Boston with mid-afternoon hockey, followed by playoff baseball at night. Before then, the Bruins are tasked with limiting Connor McDavid and the Edmonton Oilers.