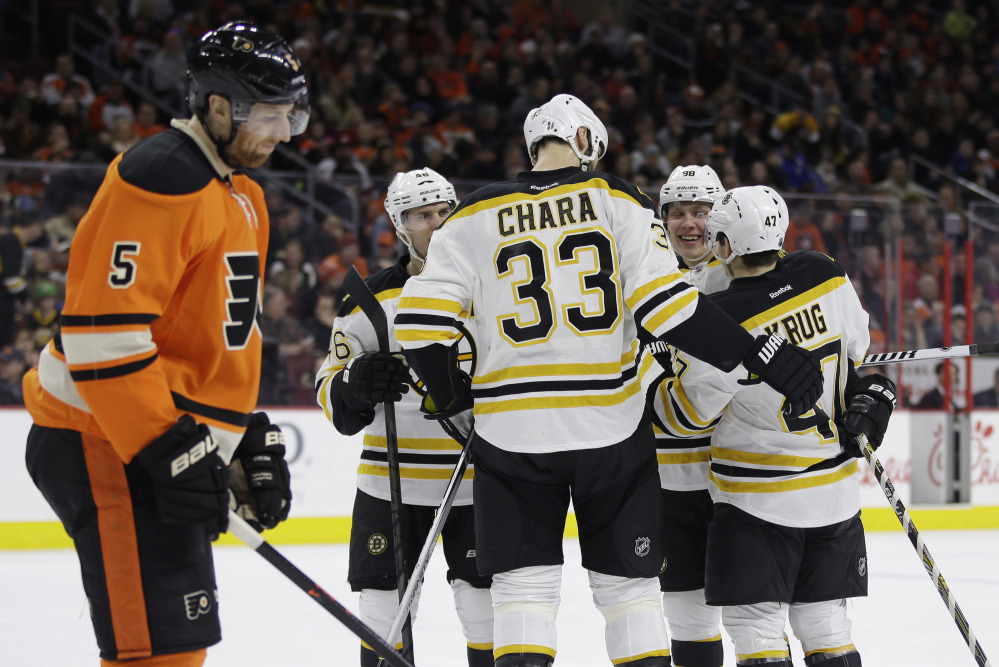 After defeating the Ottawa Senators on Tuesday, the 5-2-2 Boston Bruins now turn their attention to the Philadelphia Flyers. The Bruins are dealing with multiple injuries to Torey Krug, Charlie McAvoy, Kevan Miller, and Urho Vaakanainen. In addition, David Backes has been sidelined by an illness.

The Flyers have been dealing with an injury bug as well. James van Riemsdyk was injured on October 6th and is expected to miss five-to-six weeks of action. More recently, Philadelphia lost Michal Neuvirth and Michael Raffl, both of whom are ruled out of Thursday’s contest.

The Bruins will also be hosting their Hockey Fights Cancer Night on Thursday evening. In support of the cause, the team will be wearing purple and pink colored jerseys during warmups.

Patrice Bergeron is continuing to have a fantastic season. He racked up a goal and two assists against the Senators and hasn’t shown any signs of slowing his roll. With David Pastrnak, who had two goals and two assists on Tuesday, and Brad Marchand, who inked an assist against Ottawa, the Bruins’ first line is still chugging away and defending their title as the best trio in hockey.

Jaroslav Halak has had a good run with the Bruins thus far. The goaltender is 4-2-0 so far this season with a 1.74 GAA and .933 SV%. Halak has lost two games in a row – both in overtime – but the majority of the blame for those losses can certainly be pinned to the lack of offense by Boston’s forwards, not necessarily the goaltender. Halak will get the start against the Flyers on Thursday evening.

Jakub Voracek is off to a hot start himself. The 29-year-old leads all Flyers in scoring with three goals and nine assists while averaging 19 minutes of ice time per game. With Claude Giroux and Wayne Simonds as his linemates, Philadelphia has a pretty lethal first unit themselves.

It seems to be a running theme this season, but Boston’s depth has still fallen short of expectations. David Krejci is the only Bruins’ forward outside the first line to produce more than two points. That is a huge problem that needs to be sorted out. Boston has certainly been streaky to open the season, and that trend will continue until they get consistent scoring out of their bottom three lines. 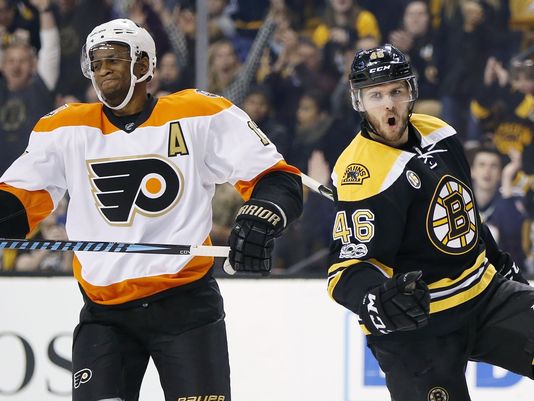 Noel Acciari, in particular, hasn’t had a good 2018-19 season. The forward is a minus-five to start the year with zero production. He is ranked second in hits on the Bruins with 20 such encounters, but Acciari needs to find a way to win more shifts. His poor performance to-date is a huge reason why he is averaging less than 12 minutes per game.

The Bruins will have to keep the Flyers’ first line in check on Thursday night. This may be a tall task with injuries to four Boston defensemen. However, Jeremy Lauzon has been called up to replace the recently-concussed Vaakanainen and will see time on the B’s third defensive pair.

🎥 @jeremylauzon21 on making his NHL debut tonight: "This is what you wait for all your life, so just gonna soak it in and do my best…looking forward to tonight." pic.twitter.com/cjsHwlfVOD

Likewise, Philadelphia will also have to key in on Boston’s top line. Bergeron, Pastrnak, and Marchand can get going in a heartbeat, and they only seem to get better as games progress. Elliott will need to have a strong bounce-back in order to net a victory. Likewise, Halak will have to erase the road trip he endured last week if he is to come up with a win.

The 4-5-0 Flyers would get back to a .500 win-percentage by defeating the Bruins, and you can expect them to play with desperation to achieve that goal. On the other hand, Boston has just returned home from a lackluster road trip, and proving that they are still a team to be reckoned with is a must. They will need to feel confident as they enter a big matchup against the Montreal Canadiens on Saturday, and defeating the Flyers on Thursday is an excellent way to do just that.