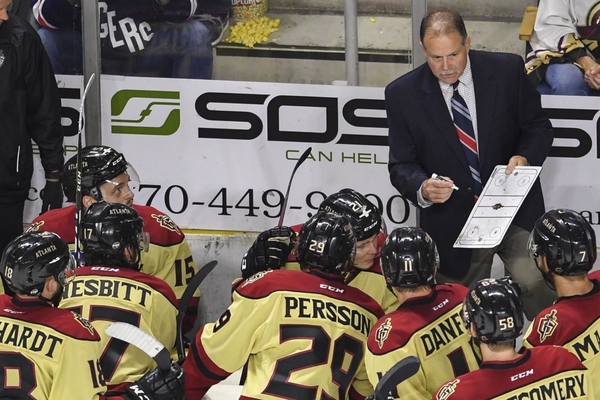 After thrashing the Greenville Swamp Rabbits 4-1 on Friday, the Gladiators were humbled to their first defeats of the season at the hands of the Orlando Solar Bears and the South Carolina Stingrays, leaving them 2-2-0 for the season. After scoring 8 goals in their first 2 games, the Gladiators could only manage 1 in games 3 and 4, head coach Jeff Pyle will be working hard this week to ensure the team get back to winning ways.

The head coach/GM has been busy with players joining and leaving. So far Carl Persson had been loaned back to the Gladiators after a short stint with the Milwaukee Admirals of the AHL, Zach Magwood was recalled to his parent club in exchange. Persson featured for the Gladiators earlier on in the season, registering an assist before being reclaimed by the Admirals. Goaltender Mirolsav Svoboda was recalled by Nashville after impressing in his 2 appearances for Atlanta, the Glads signed Ian Sylves in replacement. Jeff Pyle, keen to bolster the defence, traded future considerations for Defenseman Sean Campbell and signed Jake Flegel. Forward Darby Llewellyn was traded to the Rapid City Rush for future considerations, Tyler Moy and Joel Messner were also reassigned to Milwaukee and Providence respectively. In other roster news, forward Nolan LaPorte is back in the team from IR.

BREAKING: The @PredsNHL have loaned forward Carl Persson back to Atlanta and recalls forward Zach Magwood to the @mkeadmirals.

The Gladiators are currently 4th in the south division heading into the 3rd week of the season. The first of 2 road games this week takes place tonight, Thursday October 25th, as Atlanta face the Jacksonville Icemen, the only undefeated team remaining in the Southern bracket. The Icemen have looked strong in their opening games, but the Gladiators have the added incentive of ending Jacksonville’s unbeaten run, making this game an intriguing one. The Gladiators will have a chance to regroup on Friday before a Saturday night showdown against the Greenville Swamp Rabbits where they will look to replicate their previous result against them, a 4-1 win. Greenville are currently bottom of the division and will be determined to bounce back in front of a home crowd. Despite a slow start, the Swamp Rabbits have a talented roster and will be out for revenge. There’s never an easy game in the ECHL.

This Week’s Players To Watch:

Jesse Gabrielle: The young man looked impressive in his first game for the Gladiators, scoring a goal and combining well with fellow Bruins prospect Joona Koppanen. The spotlight is on the forward after falling out of favour in Providence, he has a great chance to redeem himself in Atlanta and so far has looked determined. There’s no question he has the talent to be a top ECHL forward, enjoy him while you can.

Branden Troock: He played like a man possessed in the 4-1 demolition of Greenville last week, after being kept out by some incredible saves, the 2nd year Gladiator scored a well deserved goal. If he can maintain that enthusiasm this week, teams will do well to keep him from adding to his 3 point tally for the season.

Derek Nesbitt: The Gladiators leader has shown no signs of slowing down. He’s already bagged himself 3 assists in 4 this season, making him the second all-time franchise assist leader. Arguably the most consistent forward on the team so far this campaign, I expect that trend to continue into week 3 and beyond.