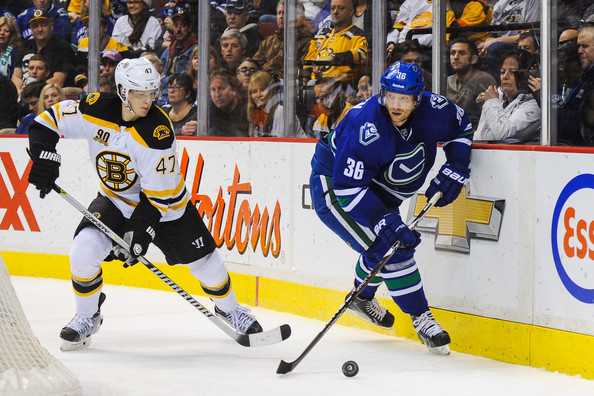 The Boston Bruins have had a rough start to their four-game road trip. They fell to the Calgary Flames 5-2 before being edged out by the Edmonton Oilers in overtime on Thursday. Entering play on Saturday night, the Bruins will try to turn things around as they look to go 2-1-1 on their first extended road trip of the 2018-19 season.

In their way is the Vancouver Canucks. After falling flat last year, the Canucks are 4-3-0 to start the new campaign and currently rest in second place within the Pacific Division.

The Bruins’ first line, as always, is leading the charge on offense. Patrice Bergeron has notched six goals and seven assists in as many games thus far, followed by Brad Marchand with two goals and 10 helpers and David Pastrnak who has eight goals and three assists to his name. Despite the depth’s struggles, it seems the trio will stick together for the time being.

Elias Pettersson has taken the hockey world by storm early on this season. His five goals and three assists in five games had him pegged as a Calder Trophy frontrunner. However, Pettersson is dealing with a concussion and has been placed on the IR by the Canucks and could miss one to two weeks of action.

Another youngster by the name of Bo Horvat will have to fill Pettersson’s void for the time being. The centerman has registered four goals and an assist in seven games and has averaged almost 18 minutes per game thus far. In the Canucks’ most recent game against the Winnipeg Jets, Horvat got over 19 minutes of ice time. Similar numbers can be expected against the Bruins with Pettersson out.

One more high note for Vancouver is the play of Sven Baertschi. The 26-year-old has started his fourth full season with the Canucks with two goals and three assists in seven games. He’s been averaging more than 16 minutes per game this season, and he will certainly have an asterisk next to his name in the Bruins’ locker room.

Boston’s depth has really struggled. There is a five-point gap between Pastrnak’s 11 points and the next leading Bruin, David Krejci, who has six points thus far. It’s a big reason why the boys in black and gold haven’t been all too consistent so far this season. Bruce Cassidy continues to juggle the lines in order to find something that will work in the bottom-9. He and the Bruins will need to find some chemistry sooner rather than later if they want to continue battling for Atlantic Division supremacy. 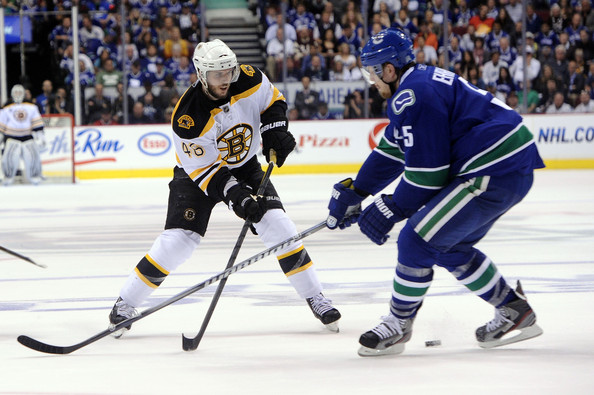 Tuukka Rask has also been struggling this season. The goaltender is 2-2-0 in his first four starts of the 2018-19 campaign and features a stat line of a 4.08 GAA and .875 SV%. It can certainly be argued that the defense has let him down at times via turnovers and poor coverage, but Rask needs to be a lot sharper – especially if the Bruins plan on making a postseason run. However, Rask had a cold start last season as well, so there is hope that he can turn things around and wind up having a stellar year overall.

Jacob Markstrom has had a rough go early in the season as well. The goaltender is 1-2-0 thus far with a 4.03 GAA and .883 SV%. He is expected to get the start against Boston on Saturday, and the Bruins’ first line may be able to capitalize on his early struggles.

Jacob Markstrom first goalie off the ice for #Canucks at morning skate. Expect to see him get the start vs Boston.

The Bruins will need to take advantage of a so-so Vancouver team on Saturday. They certainly don’t want to drop three games in a row to teams who are only slightly above average at best. I’d expect the depth to show up tonight against a cold goaltender like Markstrom.

Speaking of goaltending, Halak will need to bring his A-game as he gets the start tonight. Torey Krug is still out with his ankle injury while Kevan Miller, who was injured against Edmonton, doesn’t look as if he will take the ice on Saturday. Charlie McAvoy is also dealing with an injury from Boston’s first game against the Oilers last week and is ruled out for Saturday’s contest.

Urho Vaakanainen has been called up from Providence on an emergency basis and will certainly get some minutes on a bottom-pairing. The Bruins could really use a win, but a battered defense could be their downfall. It will likely be a high-scoring affair, so look for Boston to ride its offense as they attempt to eclipse the Canucks.

Below are highlights from the last time these two teams matched up on February 17th, 2018 at Rogers Arena in Vancouver, British Columbia, Canada.