Bruins Heinen Is Excelling On Second Line After Rough Start 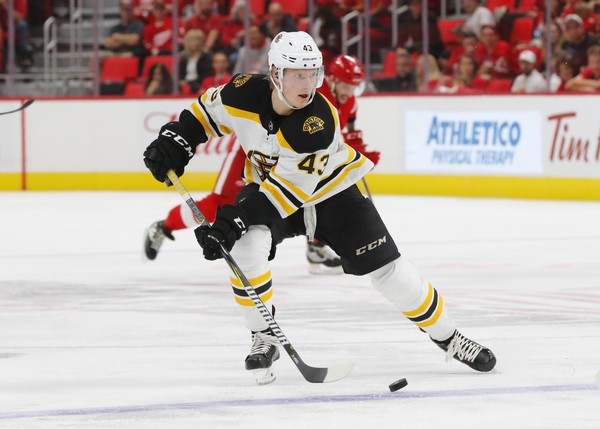 The expectations were high for Danton Heinen coming into the season. In his rookie campaign, he appeared in 77 regular season games, scoring 16 goals while recording 31 assists. In the postseason he struggled, however, the Bruins wanted to give him a shot at a top-six role this year. Through the first four games of the season, the experiment looked like a failure as Heinen failed to register a point. In the Bruins past four games, he had three assists and improved his play. It is a welcoming sign for a Bruins team that has struggled to get secondary scoring.

Alongside David Krejci and Jake DeBrusk, the left wing on the Bruins second line has been a revolving door this season. When Heinen struggled early on the Bruins gave Joakim Nordstrom his spot. Nordstrom performed well however his skill set is better suited for the third or fourth line. Last Thursday he was moved to the fourth line giving Heinen another shot at a top-six role. So far he has responded well to his second chance.

Since getting back in the Bruins lineup forward Danton Heinen has been finding success as F2 on the forecheck https://t.co/fekL4WeTe3 pic.twitter.com/ysjVkQ9MBl

Against Philadelphia Thursday night Heinen continued his impressive stretch. On the Bruins first goal, he forced a turnover behind the net and found Chara at the point for his first of two goals in the game. Heinen was winning battles along the board’s something he failed to do before being a healthy scratch. He is also making a name for himself on the forecheck.

In the Bruins, last four games Heinen’s assists have been a result of his instincts and anticipation. He is winning more puck battles and has looked like the player who surpassed expectations last year. Since his two-game benching Heinen has been more responsible with the puck and focused on reading plays. He has responded well to adversity something that he has dealt with throughout his career.

After an unimpressive training camp last year he was sent down to Providence. Heinen was able to work himself back to the NHL and became a key piece on the Bruins third line. He was however prone to stretches when he would disappear. Limiting those slumps will determine if he can keep his spot on the second line.

While Heinen’s skill level does not jump out, he does a lot of things well. Over the past four games that have been on display. He is not an elite scorer, but he does create opportunities for his linemates. His play along the board’s forces turnovers for his teammates to capitalize on. The final decision, however, is up to Cassidy and it will be dictated by Heinen’s play.

It is unlikely Bruce Cassidy is done mixing his lines. Due to their youth, this team will undergo many changes as the season continues. The Bruins will need their young players to step up which is what Heinen has done. If he can continue his recent play than the Bruins second line will become a strength and their scoring more balanced.