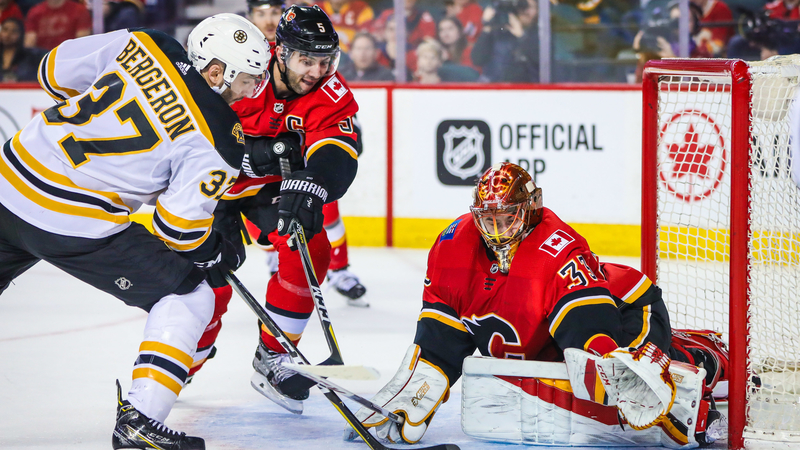 The Bruins are getting set to begin their first game of a four-game road trip, all of which are against Canadian teams. The first of the four road contests is a game against the Calgary Flames. Boston is riding a four-game winning streak over the Sabres, Senators, Oilers, and the Red Wings on Saturday night. The Bruins scored eight goals on Detroit in their most recent game, including a hat-trick by David Pastrnak.

The Calgary Flames are off to a shaky start to the new 2018-19 season. They lost their first game against Vancouver but rebounded with a 7-4 win over the Canucks only a couple days later followed by a shutout win over the Predators last Tuesday. On the 11th of October, Calgary lost to St. Louis Blues 5-3 but again came out victorious last Saturday over the Avalanche.

The first period of this hockey game was pretty back-and-forth for the first half of the twenty-minute frame. The shots remained close and chances were on both sides of the rink, but it was Calgary who scored first. The Flames stole the puck in the neutral zone, leading to a solid passing play with Michael Frolik burying the game’s first. Bruins Tuukka Rask was “over-aggressive” as the Sportsnet commentators said following the tally.

Following the goal, the play of the game did not change a whole lot. For the most part, both teams had their respective scoring opportunities until Johnny Gaudreau scored his 100th career NHL goal off of a wide-open shot. The Flames had some good puck movement in Boston’s zone, throwing pucks onto the net, leaving Gaudreau open and available to score, putting Calgary up 2-0.

Less than one minute later, Calgary would find the back of the net again as Jusso Valimaki fired a shot towards Rask. Rask was unable to get his glove on the lofting shot and it is 3-0 Flames.

Down 3-0, the Bruins tried to build some momentum back heading into the intermission and David Pastrnak did score a goal that lasted only a few minutes as the Flames bench decided to challenge the goal for a possible offside during the entry into the zone and unfortunately for Boston, the Flames would win the challenge and Pastrnak’s goal would be waived off – score remains 3-0.

🚨NO GOAL🚨#Flames have the refs review and David Pastrnak’s goal is taken off the board #NHLBruins 0#Flames 3 pic.twitter.com/E1WuhqwPxS

To end the first period, Bruins defenceman John Moore would be sent to the box for a holding minor with just around twenty seconds left to tick away on the scoreboard. Bruins head to the box for the rest of the period and will continue to kill off the penalty for 1:40 of the second-period.

Starting the second period on the already mentioned penalty-kill, the Bruins would not help their own cause due to a high-sticking penalty committed by Patrice Bergeron only twenty-four seconds into the middle frame. Thankfully, the B’s managed to successfully kill off the 5-on-3 penalty, even without their best penalty-killer in Patrice Bergeron off of the ice.

Not long after the kill, Bergeron would score a beautiful, spin-o-rama goal bringing the Flames’ lead down to just two. The play began back in the defensive zone when David Krejci prevented a Calgary slot shot with some good stick-on-stick defence. Krejci was the only assist on the goal.

Patrice Bergeron picks up where he left off and gets the #NHLBruins on the board!

It seemed the Bruins had finally gained just a tad bit of momentum that they can possibly carry out into the remainder of this hockey game, but the Calgary Flames did an excellent job shutting down any last drop of that new-born momentum by scoring a goal less than a minute after the Bergeron goal. Michael Frolik was the goal-scorer, his second of the contest.

Calgary would commit their first infraction of the night, an interference call on Michael Stone. Even though they were shorthanded, the Flames had multiple breakaways that were either stopped by Tuukka Rask or they missed the net entirely. Boston did not get too many great opportunities on the power play and it would end like that.

After another successful shorthanded kill by the B’s, Brad Marchand would score the second of the game for the Bruins off of a sweet cross-ice pass by none other than Patrice Bergeron. Bruins once again within two goals. Pastrnak will pick up an assist on the play as well.

Every member of the #NHLBruins has technically found the back of the net!

Like Calgary had to start the second, the Bruins will begin the third and final regulation on a 5-on-3 power play for fifty-eight seconds. A great opportunity to bring the game within one or even tie the game early on in the final period.

The Bruins have not looked as good as they have over the past few games, especially when passing the puck out of the defensive end. The Flames have intercepted many breakout passes in the Bruins zone and the neutral zone, some of which have led to serious scoring chances. Something the team needs to fix during the intermission break.

Boston’s previously threatening power play remained quiet tonight with a clean penalty-kill by Calgary. Neither team amounted to any real scoring threats until about eight-and-a-half minutes into the period, when the Bruins had a couple chances that didn’t find the net completely. Off one of the chances, however, Johnny Gaudreau stole the puck and drove towards the net, only to be robbed by Tuukka Rask’s pad. McAvoy levels Gaudreau after the shot, sending Charlie to the box for two minutes.

BU on BC crime. #NHLBruins pic.twitter.com/pMmKiWEWBi

Boston killed the penalty off, but the Flames continued the pressure after the man-advantage was over. The Bruins have had obvious troubles tonight creating chances in Calgary’s zone, even by the top line that has been infamous for scoring goals early on this season.

One positive is the play of Brandon Carlo. Carlo has easily been the best defenseman in tonight’s game and one could argue that he’s been the best blueliner on the defensive side of the puck during the entirety of the campaign thus far. On numerous occasions, Carlo has won the puck battles along the boards and skates the puck up himself through the neutral zone and try to create a chance in the offensive zone.

As one would do with less than two minutes in a game where your team is trailing, Tuukka Rask was pulled. Matthew Tkachuk buried the empty-net goal, giving Calgary the 5-2 lead. Michael Stone with the helper on the insurance goal.

Bruins lose 5-2 the final score. Bruins record is now 4-2-0 with both losses coming in the first game of a back-to-back. The last set of back-to-back games saw the Bruins lose to Washington, but come back against the Sabres with a victory – their first of the season.

Boston will have a quick turnaround once again when they play the Edmonton Oilers tomorrow night in Edmonton, Alberta, Canada. Puck drop for the game at Rogers Place is scheduled for 9pm EST.