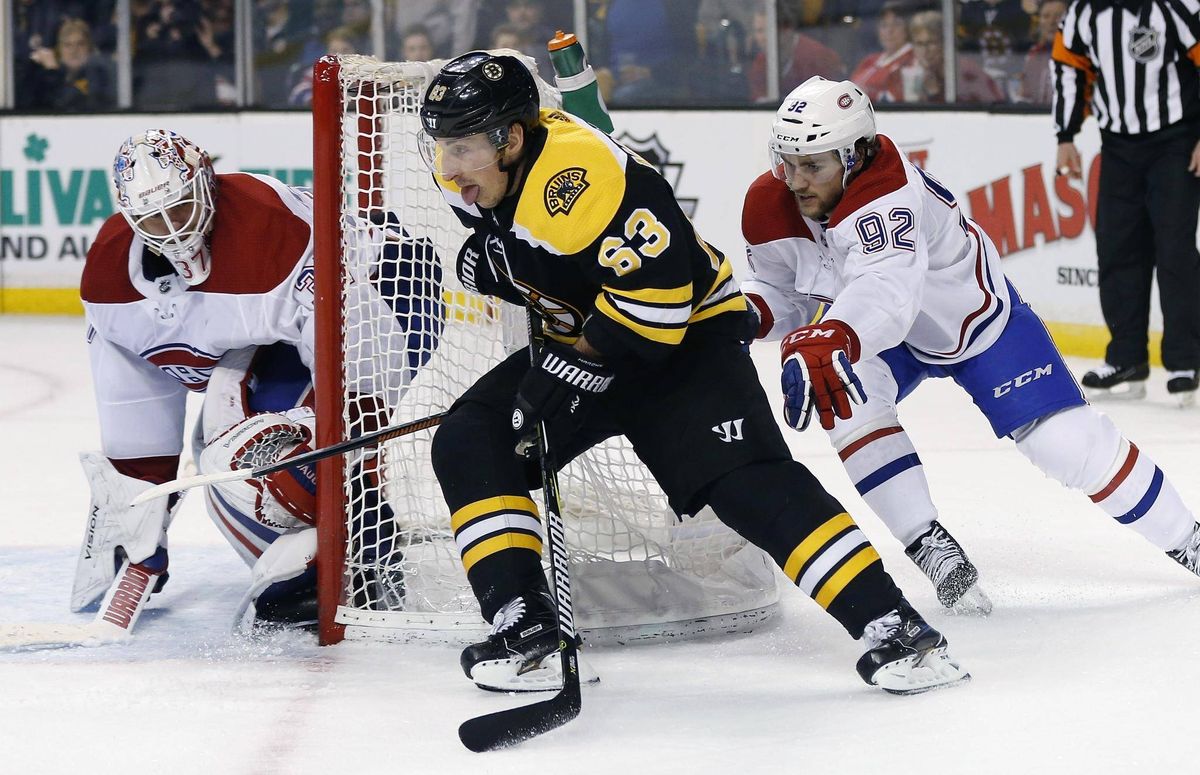 For the first time this season, the Boston Bruins and Montreal Canadiens will meet on the ice for a regular season game. Boston is coming off of back-to-back wins over the Ottawa Senators and the Philadelphia Flyers. The Bruins managed to keep the Flyers off of the scoresheet during Thursday’s game, winning by a final score of 3-0. Boston will look to win a third-straight game to try and forget about the sub-par Canadian road trip that saw three defeats one after another.

The Canadiens on the other hand, most recently lost only their second game in regulation last Thursday night, losing 4-3 to the Buffalo Sabres. Even with the loss, Montreal is still fourth in the Atlantic division prior to game time, a feat that many people thought was unlikely prior to the start of the 2018-19 NHL season.

Krug, Vaakanainen, Miller (four weeks), Backes, and are all out of the lineup vs Montreal.

The opening four minutes of the hockey game saw some good rushes by the Boston Bruin forwards, including chances by Jake DeBrusk as well as a wrap-around chance for Sean Kuraly. The Bruins seem to be on their game but it remains early in the contest.

Not long later, only 4:42 into the frame, Pastrnak gets called for a two-minute minor for slashing behind Carey Price. The penalty-kill for Boston has not been the best during the season thus far, killing off 77% of the penalties called against them. Thankfully for the Bruins, the Canadiens had some poor passes in the offensive zone, losing out on the powerplay opportunity and Boston makes the successful kill.

The speed and offensive talent of both teams were showcased about eight minutes into the period. Jake DeBrusk showed great speed on the forecheck, only for Max Domi to rush into the Boston zone the other way, almost getting in on Rask, but is shut down by Matt Grzelcyk.

Just shy of ten minutes in, it would be Brendan Gallagher who opened the scoring in the game. Gallagher dangled around Noel Acciari and shot an odd angled-shot that beat Rask who most likely wants that one back. 1-0 Canadiens.

The momentum of the goal just woke up Montreal. The Bruins could not keep up with the speed of Montreal, allowing many 2-on-1 chances for the Canadiens – making it seem like 3-on-3 overtime. Boston seemed asleep and Max Domi would capitalize on the delayed penalty just over a minute and a half after the Gallagher goal. 2-0 Montreal.

Domi fans on the first shot, but recovers and beats Rask on the delayed callhttps://t.co/Ciw3wLHO5S

The first goal was on Tuukka, but the defence was not helping the cause on the second goal whatsoever. Can’t blame Rask fully on the second tally, but did not do his job perfectly either.

As the first twenty minutes come to a close, the Bruins draw their first penalty of the game, a tripping minor to Matthew Peca. The Bruins are 9 for 29 on the man-advantage on the year and a goal would be big late in the opening period. The B’s had a big chance off a one-timer shot, then a rebound shot that was batted at the net by Ryan Donato. Price stops both chances and the Bruins have to reset the power-play.

With no lack of effort during the 5-on-4 session, the Canadiens successfully killed off the penalty to Peca and it is back to 5-on-5. The first period of play ended there, Montreal holds the 2-0 lead over Boston heading into the first intermission.

Not a whole lot of action started the second-period, but almost halfway through the middle frame, Anders Bjork feeds Ryan Donato on the zone entry who snipes the shot short-side past Carey Price making it 2-1 Montreal, or so it seemed. Canadiens Head Coach Claude Julien challenged the play for a possible offside and unfortunately, the goal was reversed – no goal.

Explanation of Coach’s Challenge at 7:45 of the second period in the @CanadiensMTL/@NHLBruins game. https://t.co/uIEVAJTx2O #MTLvsBOS

Even though Donato was robbed of his goal (would’ve been goal number two for him on the year), he continues to shoot the puck towards the net with a great release. Would be great for him to score a goal this period to really get that proverbial monkey off his back.

Boston has improved their play after the first intermission, outshooting the Canadiens eleven shots to four just over ten minutes into the second period. Not much really developed for the remainder of the period. Boston had some solid pressure but the Canadiens have been doing a good job keeping the B’s to the outside and preventing any high-quality scoring opportunities.

With less than ten seconds in the frame, however, the Bruins find themselves on a possible 3-on-1 break, but Ryan Donato trips on his own skates as he enters the zone, but Joakim Nordstrom was close enough to rip a heavy slapshot on the net. Carey Price flashes the leather with a massive windmill glove save as the clock expires.

.@CP0031 flashes the leather in the closing seconds of the second period. pic.twitter.com/UYdEaYOBKa

Boston had a decent first half of the period but then allowed Montreal to fire on the net more and more. B’s now headed into the final period down two goals and a real lack of intensity from the Bruins club. Not a great effort from the entire team after forty minutes of play and the hope is that Bruce Cassidy can bring up the morale during the intermission break.

Entering the third period with the fifth-most third-period goals so far this season with 14, the Bruins need an early goal to bring back the momentum in the TD Garden crowd tonight. Been a bit too quiet and the players seem to be feeding off of the lack of energy with the play.

The third-line of Nordstrom, Donato, and Bjork has arguably been the best line for the Bruins tonight and three minutes in the period, they found some solid chances to score. Ryan Donato has been shooting a lot since having his goal changed earlier on in the game. Relentless on the forecheck as well.

It is criminal that Ryan Donato technically doesn’t have a goal tonight. He has been everywhere in the offensive zone tonight. Good showing from him.

On another offensive rush to the Montreal zone, Ryan Donato gets tripped up, sending the Bruins to the powerplay. Joel Armia is the man who will serve the minor for the Canadiens. Fifty seconds into the man-advantage, however, Tuukka Rask comes out of the net, tripping Byron and the powerplay is over for Boston. Donato serves the penalty.

For the rest of the game, the Bruins could not get any chances to score a goal on Price. Even with some powerplays, the Canadiens shut down any small chance and cleared the puck. David Pastrnak had the best chance of the final period, a slot shot off of a David Krejci feed that Price read completely, making a routine chest save.

Jordie Benn would bury the empty-net goal off of a bank shot and the Canadiens win the hockey game 3-0 the final score. Price’s win officially puts him above Patrick Roy for the second-most wins in franchise history for Montreal (290 wins).

The Boston Bruins will look for a quick turnaround when they hit the ice on Tuesday, October 30th against the Carolina Hurricanes (6-3-1) in Raleigh, North Carolina. Puck drop for that game is currently scheduled for 7:00pm EST. The Bruins record is now 6-3-2 and they sit fourth in the Atlantic division with fourteen points.