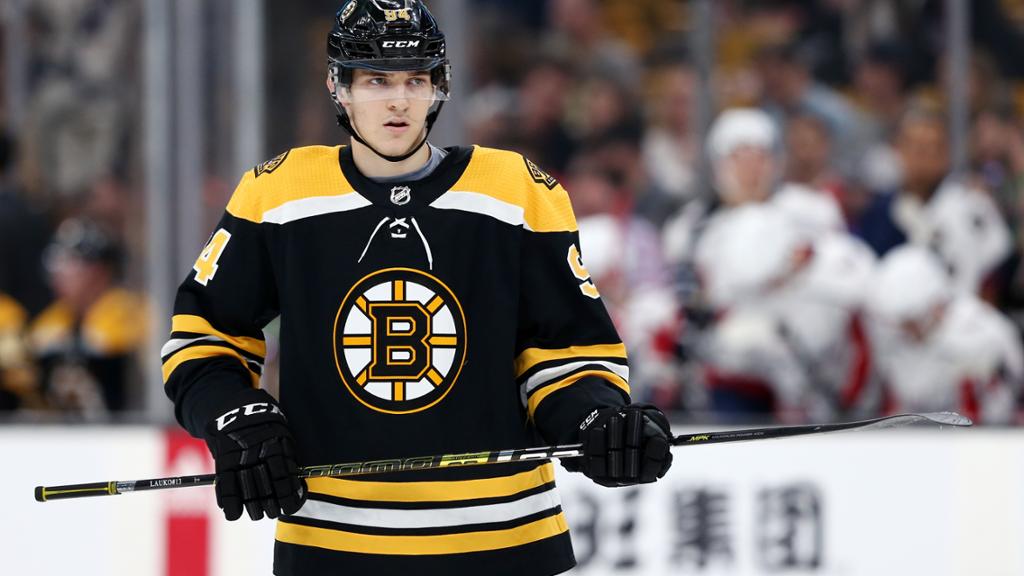 Boston Bruins prospect forward Jakub Lauko scored the first goal of his Quebec Major Junior Hockey League career last night in his third game with the  Rouyn-Noranda Huskies. Lauko’s first goal of the season came on a give-and-go when he skated hard through the neutral zone, crossing the blue line and passing it off to teammate Vincent Marleau who passed it back to the trailing B’s prospect on the left side beating the Quebec Remparts goaltender Anthony Morrone. The Huskies went on to beat the Remparts 6-4 in front of the home crowd at the Arena Lamgold in Rouyn-Noranda, Quebec, with Lauko taking home the second star of the game honors.

Lauko was released from NHL Bruins training camp and the team signed the speedy forward to a three-year entry-level contract and immediately assigned him to Rouyn-Noranda in late September. After going through the process of work papers and traveling visa issues, Jakub made his Huskies debut on Wednesday night Oct. 3 on the road against the Val-d’Or Foreurs contributing his first QMJHL point in a 5-2 Huskies win. So, with two points in three games, it’s apparent the youngster is adjusting well to his new surroundings as he continues his development and learns more about the game while playing in North American arenas with smaller ice than he’s used to playing on in Europe.

The Boston Bruins have cut Ryan Fitzgerald, Jakob Forsbacka Karlsson, Jordan Szwarz and Jakub Zboril and have assigned them to the Providence Bruins.

They have also signed forward Jakub Lauko to a three-year, entry level contract and reassigned him to the Rouyn-Noranda Huskies. pic.twitter.com/NoidwflgLh

With Lauko’s speed and creativity, I can see him having a 20 goal, 20 assist campaign as a rookie in the “Q” and might do better than that if he stays at this level for a few seasons. This is a great place for him to round out his game and gain a little more muscle before making the jump to the Providence Bruins team in the American Hockey League. He certainly looked good in development camp into Rookie Camp/Prospects Challenge in Buffalo, New York showing fans what kind of attributes he has now for future placement in the show, but for now, the Bruins need him to act like a sponge and absorb everything he can take at this level.

Many fans thought the AHL would be a perfect fit for him since being with the NHL B’s for a better part of training camp but roster spots with the top minor-pro affiliate of the Bruins might’ve been reserved in favor of the plethora of prospects the B’s have in the system. At least with this avenue and strategy, the B’s are taking time with him. He’ll get the important ice time he deserves and not in an AHL rotation where he could sit in a league that mostly operates a three-day schedule on the weekends.

You can watch last night’s highlights from the Huskies game vs the Remparts and Lauko’s first-period goal by clicking the link below.

The next games for the Huskies will be on Friday night Oct. 12 as they play host to the visiting Moncton Wildcats and again on Saturday night Oct. 13, when the visiting Drummondville Voltigeurs at the Arena Lamgold. Rouyn-Noranda is in second place in the QMJHL with a 7-1-0-0 record and is one point behind Baie-Comeau Drakkar who’s in first with 15 points in eight games.