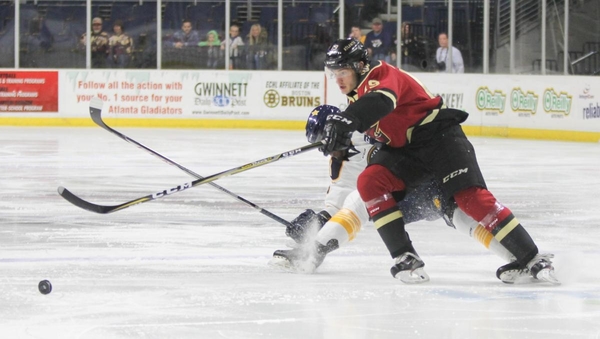 The Atlanta Gladiators week on the road is finally over. Back to back road games are always tough, and the team will be pleased to get home after a haul of 2 points from a possible 6. After a stressful week, the players and supporters can take some comfort from the upcoming schedule, which has the Gladiators at home for the next 2 weeks. Head coach Jeff Pyle will use this time to regroup and hopefully build some momentum to help the team match the preseason expectations of a playoff run. Before the homestand begins, let’s take a look back at how the team fared on the road in the last 3 games.

On Friday night, the Gladiators faced off against the Norfolk Admirals for their 3rd encounter in a row. After thumping them 5-1 the week before, there was plenty of confidence heading into the game. Colton Phinney was given the start between the pipes after a promising start to the season with the Adirondack Thunder, though the Chatham, NJ native didn’t get much help from his defensemen. By the 2nd intermission, the Gladiators were 3-0 down after goals from Darik Angeli, Jacob Graves, and Luke Nogard. The only real positive from the game was Branden Troock’s goal 5 minutes into the 3rd, which briefly gave Atlanta hope, before Luke Nogard’s second of the night condemned the Gladiators to a 4-1 loss.

Atlanta falls to @NorfolkAdmirals on the first night of a back to back.

Tonight’s Game Recap is brought to you by @MallGADentistry! pic.twitter.com/S472eg3Mtb

After a disappointing result, the Gladiators were offered a chance of redemption on Saturday night, and boy did they take it. Against the same opponent, at the same venue, the Gladiators faced off against the Norfolk Admirals for the 4th game in a row. After starting the game slowly, Atlanta was 2-0 down after 7 minutes with goals from Luke Nogard and Taylor Cammarata. Forward Brett McKenzie pulled one back for the Glads, making the score 2-1 at the end of the first period.

The Gladiators onslaught began just 19 seconds into the 2nd period when Alex Overhardt leveled the game at 2-2. Atlanta took the lead 6 minutes later when Providence Bruins loanee Olivier Galipeau scored his 3rd goal of the season. Nolan LaPorte finished the second-period rout with just 15 seconds left in the frame, Atlanta leading 4-2 at the break. The Admirals fought back in the 3rd with Cammarata’s second of the night but 2 minutes later Derek Nesbitt’s neat finish restored the 2 goal advantage, and the Gladiators emerged 5-3 victors. Goaltender Miroslav Svoboda finishing the night with 34 saves. The win was Jeff Pyle’s 481st as an ECHL coach, making him 3rd on the all-time ECHL coaching win list.

The big man with the tip in front of the net! 💪 pic.twitter.com/bOC0JjC5EQ

Congrats to Head Coach, Jeff Pyle for passing the late John Brophy for third all-time in @ECHL wins with his 481st victory last night in Norfolk!

Tuesday night the Gladiators traveled to the North Charleston Coliseum, hoping to emerge triumphant over the South Carolina Stingrays. Before the game, it was announced that the Glads had traded promising young forward, Shane Eiserman, to the Stingrays in exchange for forward Garrett Ross, a move which had a huge effect on the contest. In the second minute of the game, the recently traded Eiserman assisted Sam Fioretti, and the Stingrays took an early lead.

Moments later, Eiserman continued to haunt his former team as he bagged a goal, doubling the deficit and stunning his former teammates. Patrick Gaul piled on the misery and put Atlanta 3-0 down inside the first 10 minutes of the game. Derek Nesbitt wrestled one back, and the score was 3-1 at the end of the first. Both teams exchanged a goal in the second, Grant Besse first for South Carolina before Jesse Gabrielle scored the Gladiators second of the night. The third period was relatively quiet, and the score remained 4-2, a disappointing loss for Atlanta who was out-shot 39-16.

The results leave the Gladiators 6th in the south division, just 1 point above last-placed Greenville Swamp Rabbits. There’s certainly some work for coach Pyle to do, the stretch of home games comes at a good time and gives them a chance to turn things around. The Gladiators are in action 3 times this weekend, Friday against the Norfolk Admirals and Saturday and Sunday against the Florida Everblades.

Interested in going to an Atlanta Gladiators game? Take a look at the upcoming schedule and ticket availability from our advertising partners over at SeatGiant. Click the link below and please use discount code BNGP to save a little cash! Thank You!!