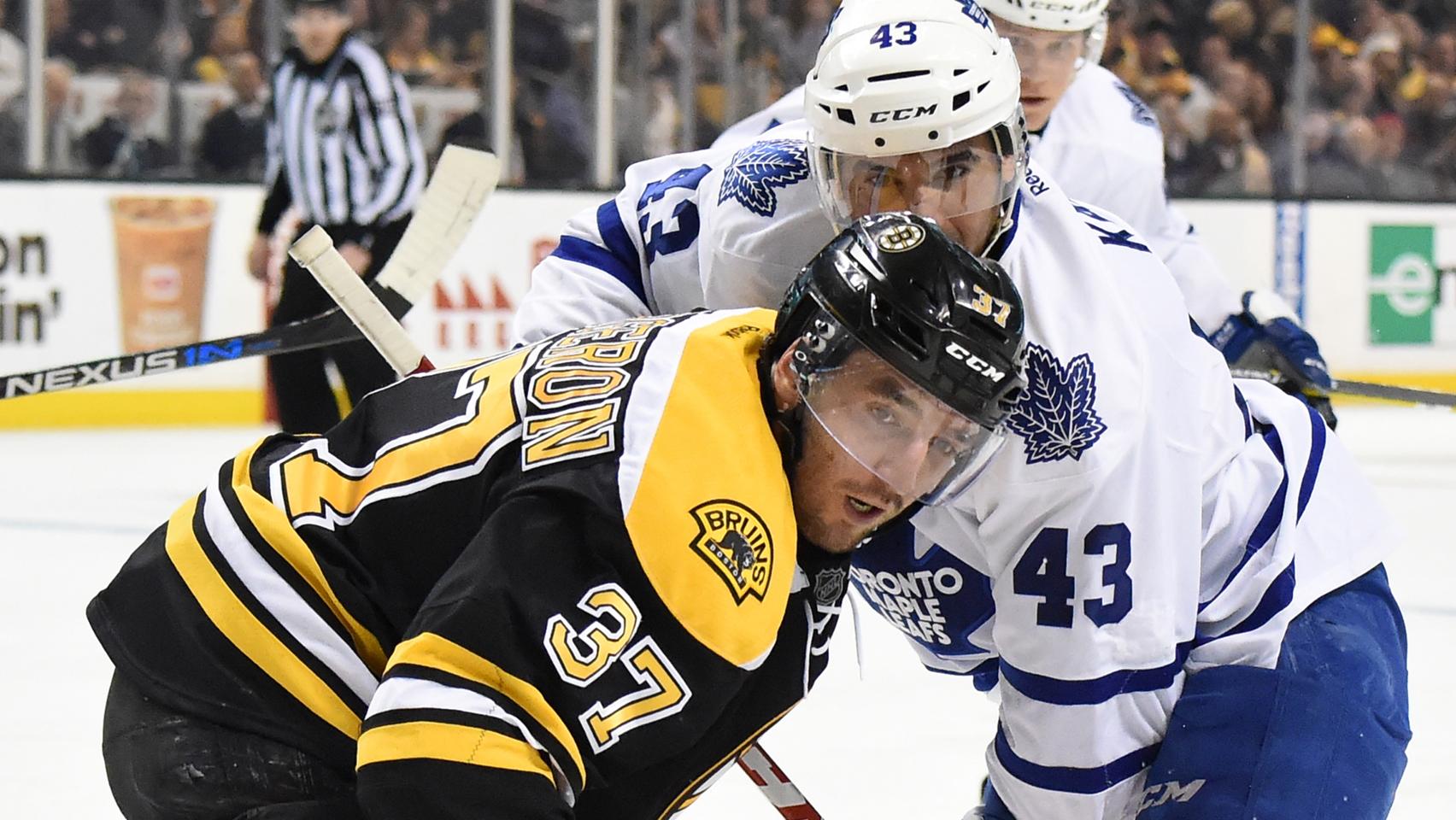 At 7:00PM, the Boston Bruins will play host to the Toronto Maple Leafs for the first time since defeating them in seven games during the first round of last season’s Stanley Cup Playoffs on April 25. The 11-5-0 Maple Leafs are second in the Atlantic Division with 22 points, behind only Tampa Bay.

The Leafs have scored 58 goals this season, again, second only to the Tampa Bay Lightning. Their goal differential is +16, good for third in the NHL, behind (you guessed it), Tampa Bay and Nashville. The Leafs’ special teams are very effective this season; their power play is fifth in the league at 27.3%, and their penalty kill is fourth, at 84.8%. Toronto will be playing on consecutive games, as they beat New Jersey 6-1 at home Friday night.

The Bruins are 8-5-2 with 18 points so far this season and are tied with Buffalo for fourth in the Atlantic Division. Thursday, they lost 8-5 to the Vancouver Canucks in an absolute gong show of a game.  Boston’s power play is third in the NHL, converting at 30.6%, and their penalty kill is less impressive, at 21st in the NHL, or 77%. The Bruins will be looking to make up for lost points tonight, and Toronto will be hoping to rack up more points in hopes of staying near the top of the Atlantic Division, as it will pay off come playoff time.

The second line left wing Jake DeBrusk had been having trouble lighting the lamp this season, but he scored two power-play goals and assisted on another against the Canucks on Thursday. He now is at five goals so far this season. DeBrusk’s center, David Krejci, also notched three assists Thursday night. Hopefully, the two can gain some confidence after getting back some of the scoring they’ve been struggling to find this season.

He's been better in every way. Stud. https://t.co/SpABlStMU2

Toronto defenseman Ron Hainsey, who is a bit long in the tooth at 37 years old, hasn’t been playing very well this year, but he tallied two goals and two assists last night against the New Jersey Devils in what might possibly be the Leafs’ strongest game this season. Center Nazem Kadri scored a goal and an assist last night, and Connor Brown scored a goal and played a great defensive game on Thursday.

kadri scores from marleau and it's 2-0 buds! pic.twitter.com/eTK0GzDm5h

The Bruins’ bottom six has been, for lack of better adjectives, ugly and disjointed this season. There is very little chemistry between Danton Heinen, David Backes, and Anders Bjork. Maybe it’s due to Backes’ injury issues, maybe it’s because playing the three of them on one line is like choosing one of each player type on Nintendo’s Ice Hockey. Maybe one of them drank Jobu’s rum. Whatever it is, they cannot get into a grove, but they have seemed to be able to get into quite a funk.

As for the Leafs, Frederic Gauthier and Nikita Zaitsev haven’t had a good start to the season, and have been looking invisible for the most part. Toronto’s lineup is pretty strong, though so this may not have too much of a bearing on the game.

Tuukka Rask has been granted a leave of absence by the Bruins, and Charlie McAvoy and Kevan Miller are still out with injuries. Daniel Vladar has been called up from the Providence Bruins to play backup to Jaroslav Halak, and Jakob Forsbacka Karlsson to presumably center the third line. The Bruins bottom six will likely look a little wacky as a result, as it is believed that David Backes will play right wing on the fourth line, and the third will consist of Heinen, JFK, and Noel Acciari.

Vladar's been better than McIntyre, but Vladar's had shaky moments — such as center ice dump-in that beat him on Nov. 2. Sweeney watched last night as Vladar had very strong game last night with 27 saves in 2-1 win

The Leafs are pretty hot at this point in the season, even without dynamic center Auston Matthews. It helps to have a world class player like John Tavares centering their second line. Despite the new look to the third and fourth lines, wouldn’t be unreasonable to expect the Leafs’ offense to take full advantage of the Bruins’ troubled bottom six. The Leafs definitely have something to prove after last spring, so they should be very engaged at the Garden tonight.