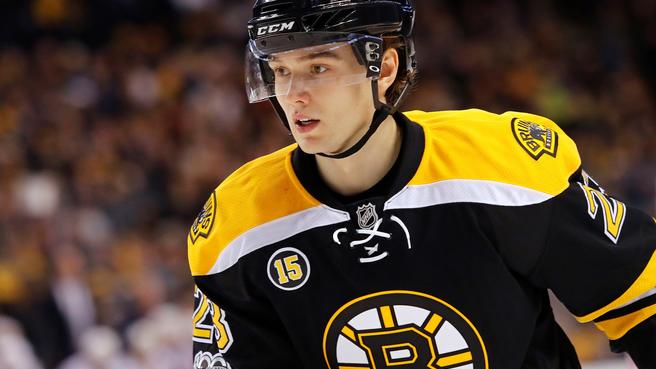 Noel Acciari made a nice play behind the Arizona net and Jakob Forsbacka Karlsson buried it front right in front of the goal to give the Bruins the early lead.

A spectacular rush by Brad Marchand resulted in Jake DeBrusk jamming home his eighth goal of the season to double the Bruins advantage just under three minutes into the game.

Brad Marchand and Jake DeBrusk team up and the Bruins have a 2-0 lead just 2:45 into the game.

Just as we all expected. pic.twitter.com/4Q0ZrySxZq

The Bruins looked to be flying around the ice in the early stages of the game, trying to atone for their lack of offensive success against Dallas. Defensively the team looked pretty comfortable as Jaroslav Halak didn’t face too much pressure in the early going. The Bruins went to penalty kill midway through the period as the Coyotes looked to get back in the game.

After an impressive effort play by Joakim Nordstrom, the Bruin forward drew a penalty which resulted in a four on four situation. A few saves by Halak during the abbreviated Boston power play kept it a two goal game as the Bruins became a little careless with the puck. Sean Kuraly took a tripping penalty shortly after as the Bruins were shorthanded again. The Bruins killed the penalty as the Coyotes got a few opportunities.

Matt Grzelcyk appeared to score as Anders Bjork got tangled up in the crease with Darcy Kuemper but the goal was overturned as it remained a two goal game late in the period.

The Bruins would go on the man advantage as Oliver Ekman-Larsson took an interference penalty about a minute into the period. Halak made an incredible save on a two man breakaway on the power play to keep the Bruin lead of two goals. The Coyotes killed the penalty as the Bruins failed to get any scoring chances. Both teams began to get a bit physical as a few players started to throw their bodies around.

After bad giveaway by the Bruins in the corner, Brad Richardson finished off a nice feed by Vinnie Hinostroza to cut the Boston lead in half almost midway through the period.

The Coyotes started to find their game in the middle stages of the period as the Bruins started to struggle to get possession in the offensive zone. The Bruins seemed to respond well as they got a bit more possession and even got a few shots on goal. A big turnover in the Arizona end nearly resulted in the Bruins taking a two goal lead but Acciari was denied by Kuemper in the slot.

A few scrambled moments in the Boston end in the final minute nearly resulted in the tying goal for the Coyotes but it remained a one goal game heading into the final period.

The Bruins again seemed to struggle in the defensive zone especially getting the puck out but the defense was able to hold strong in the first few minutes of the period. The Bruins responded with a good shift in the Arizona end as Marchand gave the Coyotes issues and nearly gave the B’s a two goal lead.

The Bruins went on the penalty kill as David Krejci was called for interference with under 14 minutes to go. The Coyotes were unable to capitalize as the Bruins did a great job killing the penalty especially Marchand who got a good scoring chance in the early part of the man advantage.

Neither team got many great chances as the period went on but that didn’t mean the teams weren’t working hard. The Bruins especially seemed to be really pushing for an insurance goal in the latter part of the period. The Coyotes started to get it going later on in the period, looking for a tying goal. Michael Grabner drove hard to the net, resulting in a hooking penalty to Grzelcyk as the Coyotes went to the man advantage with under two minutes left.

A couple huge saves by Halak and a great play by Jeremy Lauzon to knock the puck out of the crease helped seal the win for the Bruins.

Jeremy Lauzon with the final save of the night. What an ending. pic.twitter.com/SV2xX2xsul

First Star: Halak. The Bruin goaltender stopped 31 of 32 shots and was outstanding in a few big moments as the B’s picked up a huge win without some key players.

Second Star: Acciari. After being sat down by Bruce Cassidy recently, Acciari responded with an assist and a number of big hits.

Third Star: DeBrusk. The young winger was everywhere in this game and a had great net drive on his goal in the first period. Number 74 has seven points in his last seven games.