Young Defensemen, Goaltenders Come Up Big For The Bruins Over The Weekend 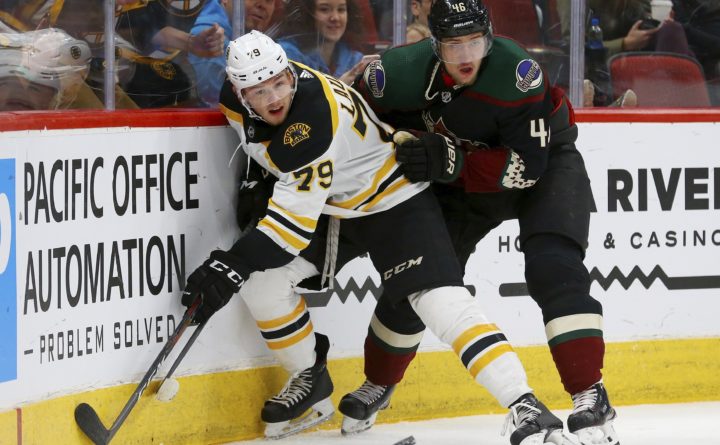 This weekend had the potential to be a turbulent one for the Bruins, but a couple gutsy efforts got them three out of four points. With an already battered defensive core, Zdeno Chara’s MCL injury against Colorado left them another man down, and John Moore’s lower-body injury hampered them even more against Arizona. The Bruins didn’t allow those injuries to let the floodgates open against the Dallas Stars and Arizona Coyotes.

This comes in large part due to the new-look defensive core, and the goaltenders. Tuukka Rask started on Friday in his first start coming off his leave of absence and was the main reason they took a point out of the loss. Rask made 36 saves, and the young defensemen stepped up when they were needed to. Dallas, like Boston, has a battered defensive core themselves with John Klingberg, Marc Methot, Connor Carrick, and Stephen Johns out of the lineup. So looking into the game from the outside, it could have been a high scoring game – it wasn’t.

Against Dallas, Matt Grzelcyk led the team with 25:27 of ice time, Jeremy Lauzon played 24:52, and Connor Clifton played 18:53 in his NHL debut. Despite seeing increased roles, these guys did not look out of place. Connor Clifton racked up nine penalty minutes, in part thanks to dropping Stars veteran centerman Jason Spezza in a fight. When it comes to the physical part of hockey, Clifton doesn’t seem to mind getting amongst it. Jakub Zboril, who also made his debut, looked fairly solid overall in limited ice time.

Losing 1-0 in overtime is understandably frustrating, but it certainly wasn’t because of a lack of defensive presence and goaltending. Patrice Bergeron was banged up in the loss and was eventually sent back to Boston for evaluation, causing more lineup shifting in Arizona. Torey Krug emphasized the need to just power through and adapt to the injuries with a next-man-up mentality. His role in the team’s success cannot be overstated, as he filled his role as a puck-moving defender very well and logged over 22 minutes of ice time in both games.

"No one's going to replicate what Zdeno does…we've been facing injuries all season, so it's that next-man-up mentality."

🎥 Torey Krug discusses the latest round of #NHLBruins injuries: pic.twitter.com/LcP103b1iS

Injuries were a theme this weekend as Arizona’s defensive core was missing Jakob Chychrun, Jason Demers, and Alex Goligoski against the Bruins last night. In a game that saw two-thirds of its goal scoring come in the first three minutes, both from the Bruins, playing sound defense was critical on both sides. Brad Richardson cut the deficit to one around the halfway point of the second period, but the defense stood tall in front of Jaroslav Halak in his 32-save win.

Jakub Zboril looked solid again in limited ice time, and Grzelcyk, Lauzon, and Clifton held it down in increased roles, all logging over 20 minutes of ice time. Without the sound defense provided, this game could have been ugly, as the Coyotes outshot the Bruins 33-23, and won 66 percent of their faceoffs. It’s safe to say that Patrice Bergeron’s absence had an impact on their success on the dot. Bergeron holds the second most faceoff wins in the league with 243, behind Jordan Staal’s 249, and the 15th best faceoff wins percentage at 55.7 percent.

This play by Jeremy Lauzon shines in a weekend where he had a heavy weight to carry on his shoulders, and he did.

Jeremy Lauzon with the save to seal the win #NHLBruins pic.twitter.com/Be9E7NttpF

Additionally, Jakob Forsbacka Karlsson scored his first NHL goal, and Jake DeBrusk got on the board yet again. DeBrusk has five goals and six points in his last six games. With these injuries, the Bruins can only hope that they can get on the board more than they did this weekend and that their defensive core can continue to step up in the absence of key pieces.