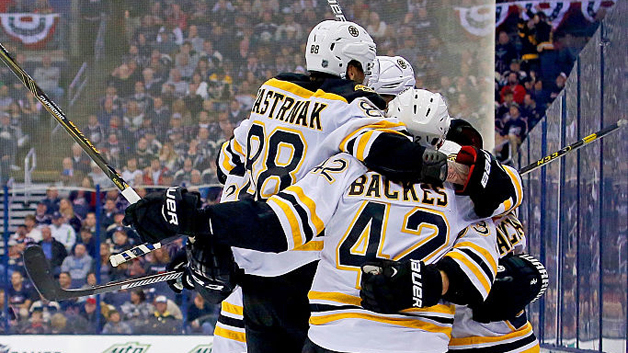 The game got off to a fast-moving start as both teams were flying up and down the ice. The Nashville crowd was into the game right away as the Bruins looked to grab an early lead. Neither team got any great scoring chances early but both goalies seemed ready from the start. The Bruins did do a good job of not allowing the Predators to gather speed through the neutral zone in the early going, limiting their scoring chances.

The period continued without any great scoring chances but the B’s held the Predators at bay with some solid defensive play in their own zone. The Bruins would go on the penalty kill for the first time as Brandon Carlo went to the box for hooking. The B’s killed off the penalty without giving up any significant chances. Shortly after the power play, Roman Josi made an outstanding couple of moves on his way to scoring his fourth goal of the season.

Directly off the ensuing faceoff, Joakim Nordstrom walked in on Pekka Rinne which drew a hooking call on Yannick Weber to put the Bruins on the power play. The Predators killed off the penalty as the Bruins failed to get any shots on goal. Almost immediately after the power play, Noel Acciari went off for a hooking penalty which gave the Predators their second man advantage of the game. The Bruins killed off the penalty as they got a few shorthanded opportunities.

In the final seconds of the period Brad Marchand took a high sticking and an unsportsmanlike conduct penalty to give the Predators a four minute power play.

The Bruins were able to kill off the first Marchand penalty as the Predators failed to get any chances on Halak. A few outstanding saves by the Bruin goaltender kept it a one goal game as the Bruins killed off the second penalty. The B’s picked up a power play as Ryan Hartman went off for a hook. The Predators killed off the penalty without giving up any significant chances.

The Bruins would go back on the power play after David Pastrnak drew a hooking penalty on Kevin Fiala. The Predators killed the penalty yet again as the Bruins continued to struggle to get consistent zone entry on the man advantage. The Bruins started to get their footing towards the end of the period after a couple of good shifts by the Kuraly and Krejci lines.

As the period drew to a close, neither team was able to truly grab control of the game. The Bruins seemed to be close to tying the game with a couple of good shifts. The fourth line drew a penalty as Acciari was taken down in front of the Nashville net to give the Bruins their fourth power play of the game. The Predators killed off the penalty as the Bruins struggled to even maintain possession of the puck. A penalty to Steven Kampfer gave Nashville a power play at the very end of the period.

The Bruins killed off the penalty to Kampfer with some solid play in their own end. Halak continued his good night in net with a few solid saves in the early part of the final period. After a turnover in the defensive zone, Halak made a huge stop on Craig Smith to keep the game within reach for Boston.

The period continued with the Bruins getting better zone entry but without any great chances and obviously without any goals. The Predators seemed to get more chances as the period went on but were stonewalled at every turn by Halak who gave the Bruins a chance to win.

The B’s sent Halak to the bench with about two minutes to go, looking for a tying goal. The Bruins were unable to find any decent chances in the last two minutes as the Predators defense held strong.

Third Star: Josi. The Nashville captain was as solid as ever, scoring a goal and playing very good defense from start to finish as the Predators won their league-leading 11th game.

Second Star: Rinne. The Predators goaltender was very strong, getting his second shutout of the season and denying a few good chances in the last two periods.

First Star: Halak. The Bruin goaltender was outstanding in this one, giving the B’s a chance to win all night. Big saves in the third period especially helped keep the game close.