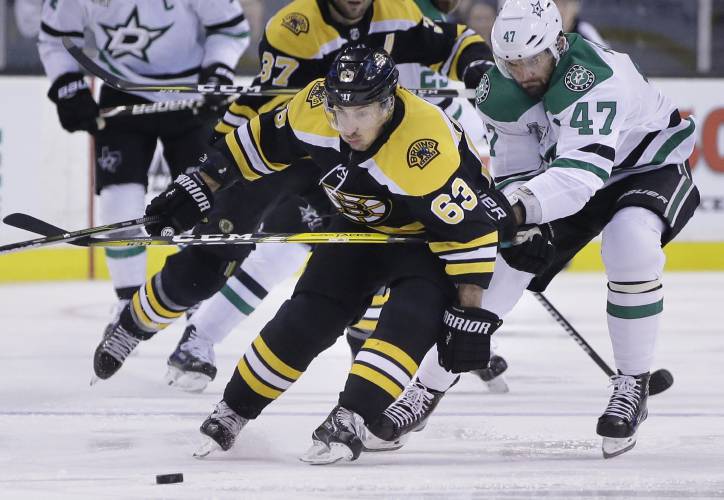 Old friends Anton Khudobin and Tyler Seguin led Dallas into Boston in featured roles. Winners of their last three coming in, the Stars came in with some pep in their collective step. Despite not scoring a goal in his last 10 games, Seguin has been the top dog in Dallas, entering the game with 14 points in 13 games. Former University of Denver Pioneers head coach Jim Montgomery took over behind the bench for the Stars over the summer. This game marks the first time Montgomery’s Stars will take on the Bruins.

The World Series trophy was in the building as Sam Kennedy, John Henry, and Joe Kelly represented the World Series Champion Boston Red Sox as they hit the ice for the ceremonial puck drop.

How wholesome is this?

A game-time decision throughout the day, Matt Grzelcyk returned to the Bruins lineup after a two-game absence. The defensive core gets a missing piece back, with Charlie McAvoy and Kevan Miller still injured. He had five assists in 11 games in October.

The first power play of the game came at the 16:35 mark when Roman Polak went off for interference. Just 26 seconds later, Radek Faksa sent a bad-angle shot on net that beat Tuukka Rask. The shorthanded goal from Faksa made it 1-0 Dallas early, but that lead didn’t last for long. A minute and 20 seconds later, Patrice Bergeron snagged a loose puck off of a battle in the corner and found a wide open David Pastrnak for his league-leading 12th goal of the season. Patrice Bergeron and Jake DeBrusk had the assists with their 13th and first assists respectively.

David Pastrnak ties it up on the PP 1-1 #NHLBruins pic.twitter.com/tPEfNY4kSM

Torey Krug nearly buried one late on a rush with Sean Kuraly. As one of the league’s premier offensive defensemen, Krug has made a very noticeable difference in the flow of the Bruins’ transition offense since returning to the lineup last Tuesday against the Carolina Hurricanes.

Despite the game being tied, the Bruins pushed the pace as they outshot the Stars 13-4. Shot attempts were a daunting 22-6 in favor of the Bruins. After an intense start to the period, things settled down a bit and stayed at a stalemate heading into the second intermission.

Back on the topic of Torey Krug, he nearly made it 2-1 Bruins less than two minutes into the period with a booming wrist shot from the left circle that nicked the inside of the post. Zdeno Chara nearly scored not too long after, starting a trend of defensive involvement early. Noel Acciari then found himself in on a two-on-one – and he hit the post. The chances were there early on in the game, just not the execution.

The fourth line was buzzing for the Bruins at all times. Otherwise, it was a fairly bland period on both sides. Brad Marchand put a Dallas defender in a blender for a good chance late, but again, nothing going, both goalies were making key saves in fairly limited action. A quick whistle late prevented what would have been a sure second goal of the season for Anders Bjork – resounding boos came from the TD Garden crowd as a result.

Brad Marchand responded shortly after with a chance of his own on a wraparound but was stopped by the active stick of Stars defenseman Julius Honka at the goal line.

The shots evened themselves out, as they were 9-8 in favor of the Stars in the second period – 21-13 Bruins throughout the game at this point. The Bruins pushed the pace throughout the majority of the game to this point, but the 1-1 score made it, so things were still up for grabs heading into the third period.

It’s getting crazy at this point. Patrice Bergeron was centimeters from finally giving the Bruins a one-goal lead. Take a look.

The theme of offensive dominance for the Bruins continued as Dallas couldn’t get anything going past the neutral zone in the first half of the third period. Neither team had many shots in the early going, but the chances and consistency of offensive pressure were all Bruins.

The referees were pretty lenient until Torey Krug took a questionable boarding penalty and was rightfully frustrated. A slight push from Krug on Gemel Smith en route to the corner sent Smith into the boards awkwardly. Nonetheless, the Bruins saw their first penalty kill scenario of the night. Tuukka Rask nearly handed Dallas a goal on an attempt to play the puck gone wrong, but the Bruins escaped the penalty kill unscathed.

A high-octane end to regulation followed but again, no one could finish. Free hockey in Boston. Shots were 32-23 overall, 11-10 in the period in favor of Bruins at the end of regulation. David Pastrnak had one shot on goal in regulation, which is uncommon, but he made good on it.

With 1:44 to go, Dallas fell victim to an unfortunate too many men on the ice penalty. Then, Esa Lindell went to the box for boarding ten seconds later – it’s a 5-on-3 in overtime for the Bruins.

Tuukka Rask was stellar after letting up an early goal to Faksa, stopping 24 of 25 shots. Final shots were 35-25 Bruins. Next up on the docket are the Vancouver Canucks on Thursday at home at 7:00 PM ET.