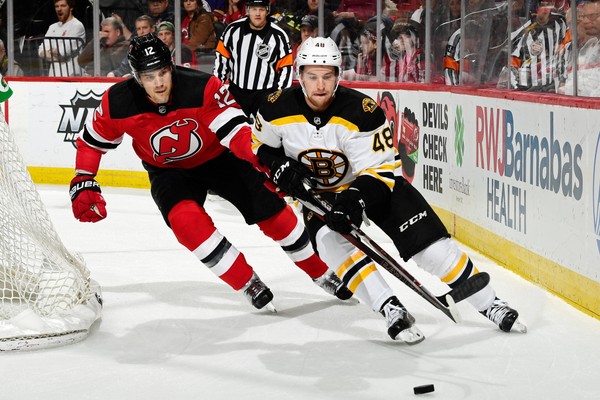 A good shift by the Boston first line in the opening moments of the game gave the Bruins a bit of a jump. After a turnover at the defensive blue line, Bo Horvat fired home a wrist shot past Jaroslav Halak just 2:46 into the game.

Another look at another road goal by @BoHorvat, his seventh away from home. pic.twitter.com/De1JQRPO4t

After a blocked shot in the offensive zone, Halak made a huge save on Markus Granlund on a two on one to keep it a one goal game. The second line looked to be right in the middle of it in the early stages of the game as Jake DeBrusk got a few chances. The Bruins had the majority of the chances through the midway point of the period as they held a pretty big advantage in possession. The Canucks started to get more possession towards the end of the period as the game began to even out a little bit. A heck of a play by DeBrusk set up a rocket of a slapper by Matt Grzelcyk to tie the game at one with 6:19 to go in the period.

Matt Grzelcyk ties things up in Boston, what a shot. 1-1 #NHLBruins pic.twitter.com/7tjAGCiSDp

The goal seemed to open the game up as both teams began to get chances in good areas. A good shift by the first line closed out the period with the game still tied.

An outstanding shift by the first line resulted in Patrice Bergeron stuffing home a rebound off of a shot by Torey Krug just 36 seconds into the period to give the Bruins their first lead of the game.

The Canucks went to the power play about three minutes later as Steven Kampfer went off for interference. The Bruins were able to kill off the penalty, allowing three shots as Halak stood tall. After the power play, the B’s became a little scrambled in their own end and Loui Eriksson capitalized, scoring his second goal of the year to tie the game.

Loui Eriksson set up Gudbranson for the first chance and then buries the rebound. This got the #Canucks into a 2-2 tie. pic.twitter.com/vLLgpexh44

Immediately after the power play, Grzelcyk took a penalty for a high stick as the Canucks looked to retake the lead. Ben Hutton gave the Canucks the lead on the power play off of a shot from the point but it didn’t last long.

The PP goal from Ben Hutton that briefly gave the #Canucks a 3-2 lead on the Bruins. Now a 3-3 game in the 2nd period. pic.twitter.com/6VPJFdZoOu

Jake DeBrusk with a great tip-in to become the first Bruins’ non-top line forward to score an even strength goal in over 400 minutes pic.twitter.com/sGBHqTd7gn

The scoring opened up the game as both team were flying up and down the ice. Kampfer took a hooking penalty with 8:30 to play in the period, his second penalty of the night. The Canucks capitalized again on the man advantage as Ericsson deflected a shot past Halak for his second goal of the game to make it 4-3.

Loui Eriksson with the nice little tip on the Hutton shot for his 2nd of the game. #Canucks #VANvsBOS pic.twitter.com/v3sKXgqiqU

The Bruins continued to struggle in their own end as Antoine Roussel jammed home a pass from Granlund to give the Canucks a two goal lead just a minute and a half after the Eriksson goal. Tuukka Rask replaced Halak following the goal.

Antoine Roussel pads the #Canucks lead with a deflection goal of his own in front of the Bruins net. pic.twitter.com/3hq43aaYfl

The Bruins would go to the power play for the first time after a slashing penalty to Horvat with just under four minutes left in the period. A beautiful pass by Krug resulted in a second goal for DeBrusk, this time on the man advantage as the Bruins cut the lead to one.

A long wrist shot by Erik Gudbranson gave the Canucks another two goal lead with about 30 seconds to go in the period.

That’s Erik Gudbranson with his first goal of the season. #Canucks pic.twitter.com/BxrUax6um6

Just 38 seconds into the final period, the Bruins went on the power play as David Pastrnak got tripped by Horvat. The power play was cut short as Brad Marchand went to the box for a slash about a minute into the Boston man advantage. The Bruins killed off the abbreviated Vancouver power play as the Canucks failed to get any shots on goal.

After the penalty kill, the B’s got a few great chances in the offensive zone as they seemed to be more energized. Horvat took yet another penalty, this time a high stick to put the Bruins back on the power play as they looked to cut into the lead. The B’s would get a two man advantage as Pastrnak was slashed on a net drive by Hutton. Horvat scored on a gaffe by Rask for a shorthanded goal to give the Canucks a three goal lead.

Jake Virtanen scored off the rush on a deflected shot that beat Rask to make it 8-4 Canucks and causing fans to head for the exits with about nine minutes to go.

With this goal from Jake Virtanen, the #Canucks lead the league in goals scored.

The Bruins got another power play after the goal to attempt to stop the bleeding. Danton Heinen got his first goal of the season off of a tip of Krug’s slap pass to make it a three goal game with over six minutes to play.

Danton Heinen’s first of the season cuts it to a three-goal lead for Vancouver. pic.twitter.com/J1huGXQyGT

The Bruins were unable to get any closer the rest of the game but Krug did drop the gloves late in the period for those keeping score at home.

Third Star: Krejci. The Bruin center had three assists on the night and was one of the reasons for the big night for the Boston second line.

Second Star: DeBrusk. Number 74 played perhaps his best game of the season with two goals and tremendous energy from the start.

First Star: Eriksson. The former Bruin was very solid against his old team and found the back of the net twice as the Canucks ran the B’s out of their own building.

Do you live in the New England area and want to attend the Boston Bruins games that are being played during the upcoming homestand? Check out the available seats from our advertising partner Seat Giant!  You still have 2 GREAT GAMES to choose from (Toronto and Vegas)!!! Click the link below for more details and please use discount code: BNGP if you make a purchase.
https://www.seatgiant.com/Boston-Bruins