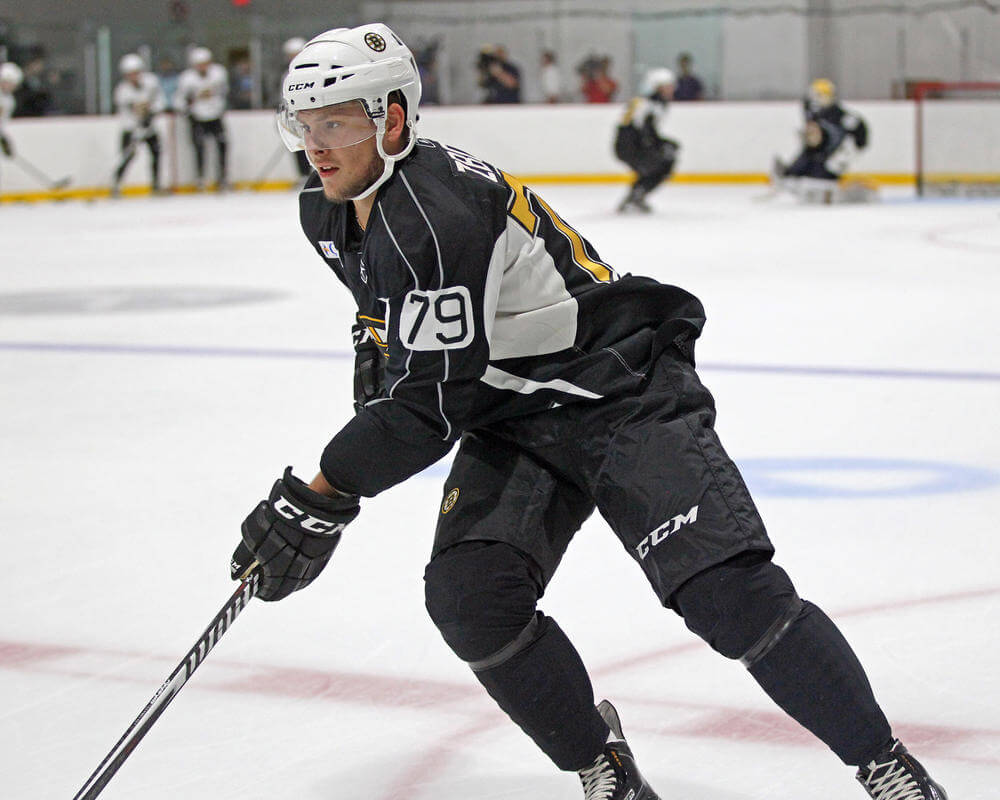 When Jakub Zboril was drafted 13th overall in the first round of the 2015 NHL Draft defense was a major need that Bruins wanted to address. By most accounts they had. Zboril was thought of as good left shot two-way defenseman. He was not elite in any one area, but he also did not have any glaring weaknesses. He drew comparisons to NHL defenseman Keith Yandle, a top 4 defenseman that could be slotted into your lineup for many years to come. With all this praise and upside, you might be asking yourself “where is this guy, and what’s happened since being draft?” I am glad you asked because I am here to tell you just that.

After being drafted in June of 2015, Zboril finished up his second season in the QMJHL with the Saint John Sea Dogs. In 50 games had 6 goals 14 assists for a total of 20 points with a +/- rating of +10. The playoffs, however, is where he really turned it on. In 17 playoff games, he had 2 goals 8 assists for 10 total points and a +2 rating. Not a bad season for a young defenseman who had just been drafted. Zboril seemed to carry the momentum of the playoffs into the next season in 50 games with Saint John he amassed 9 goals and 32 assists for 41 total points with a rating of +19. In 16 playoff games, he continued his hot streak with 3 goals and 4 assists in 16 games with a rating of +10 which helped lead Saint John capture the 2016-17 QMJHL Championship.

The 2017-18 season was Zboril’s first the AHL. Entering his first full season in professional hockey with the Providence Bruins there were a lot of high expectations, but also some questions arose surrounding his work ethic. It was reported during his first few rookie development camps that he did not bring the necessary energy to compete at a high level. These first impressions while fair, or unfair have followed him throughout. The talent was never in question, it was just the work ethic and the ability to stay consistent. During the 2017-18 after starting off slow Zboril put together a nice season registering 4 goals and 15 assists for 19 total points and a rating of +12. He did not register a point and had an even rating in the teams 4 playoff games.

He did draw praise after his first full season with Providence. The Bruins wanted him to work on his defensive consistency during the season, and he did a pretty good job of that during the year. The offensive tools that were on display in the QMJHL were also evident during the year. Something else that came out of this year is by all accounts he adopted some good work habits on and off the ice. Zboril’s development seemed to be coming on nicely which is what you want to hear about your high draft picks.

Jakub Zboril showing off his two-way ability by skating in and roofing his wrist-shot, top-shelf. This is the 2nd-goal of his career and it was a beautiful one. #NHLBruins pic.twitter.com/xWspuWflvE

Coming into this season the team still had high hopes for Zboril, but he may have been lost in the shuffle a little bit. 2016 first round draft pick Charlie McAvoy has played well since being drafted, and fellow 2015 defensive draft pick Jeremy Lauzon in some people’s eyes may have leaped ahead of Zboril with his play and development. To start off this year, Zboril battled a concussion in camp and had a slow start. However, recently he has played well and has 2 goals and 2 assists in his first 13 games this season. He still shows the offensive potential he had when drafted while also coming into his own defensively as well.

After this feed from Senyshyn, Zboril scores his second of the year off this one-timer. He’s been showing off the offensive side of his game more this year and looks good doing so. He has a fluent shot-mechanism and can really hammer the puck, both hard and accurately. #NHLBruins pic.twitter.com/flxWraXZeC

Zboril’s development may be coming along slower than some people and fans may like but easing a player into a role isn’t a bad thing. The Bruins have the luxury of playing the slow game with Zboril because of the play of guys like McAvoy and the development of Jeremy Lauzon. If the Bruins play this correctly and they do ease him into a role, I think it is something that will pay off huge dividends in the long run. In a year or two, the Bruins could have a young talented defense comprised of mostly players they developed on their own. When Zboril was drafted in 2015 that seemed like a pipe dream. However, if you’re patient and careful with Jakub Zboril’s development that pipe dream will be a reality, and it will be an absolute joy to watch.