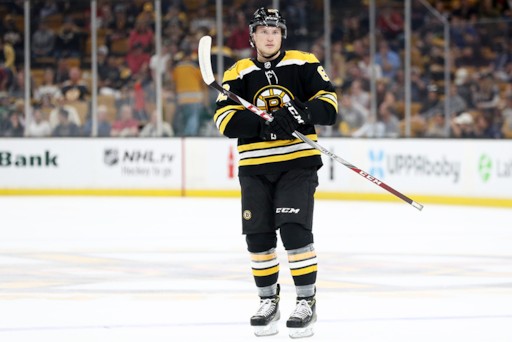 When Trent Frederic was drafted 29th overall in the first round of the 2016 NHL Draft, it left a lot of people scratching their heads. Frederic was drafted ahead of his projections. While he had good size and was defensively responsible as a center, he lacked the offensive explosiveness that one might look for from a player you draft at the end of the first round. Even the Bruins Director of Amateur Scouting at the time Keith Gretzky said that he wasn’t going to be a top-two-line guy. That doesn’t exactly inspire confidence in a draft pick. Frederic wasn’t supposed to be a successful draft that early, but the funny thing is someone forgot to tell him that.

@BadgerMHockey's Trent Frederic ties the game at 1-1 in the 2nd period. Catch the game on #FOXSportsGO https://t.co/7V4O5uGJT4 pic.twitter.com/f6tWWTpaps

Trent Frederic possesses good size and strength from the Center position and is a good two-way player. In his freshman season at the University of Wisconsin in 2016-17, he showed that off. In 30 games with the Badgers, he recorded 15 goals and 18 assists for 33 total points with a +/- rating of +2. These are stats that, if you’re the Bruins you really like to see. A lot of things can happen to a player after being drafted and then going into their first season in a new league. It can overwhelm a player and take them time to settle into their own. This is something that didn’t happen to Frederic. He played well and showed off why he was drafted as high as he was by the Bruins.

Trent Frederic. Breakaway. Goal. @BadgerMHockey and Michigan are all tied up at 2-2 on #FOXSportsGO: https://t.co/JiRjUo46qI pic.twitter.com/do51pR76kI

In Frederic’s Sophomore season at Wisconsin, he had a lot of expectations to live up to. He really showed that he had some good offensive ability, an ability that had been questioned after being drafted so high. He did take a step back a little bit offensively during the season in 36 games for the Badgers he recorded 17 goals and 15 assists for 32 total points and a +/- rating of –9. While his points were down a little something, important happened for Frederic during that season. He was wearing the “A” on his sweater for Wisconsin all year. He took on a bigger leadership role and did was successful with that. Knowing a player isn’t afraid to take on a leadership role, especially as a young player is a huge bonus for the Bruins.

After his Sophomore season, most people expected Frederic to stay at Wisconsin at least one more year. However, that is not what happened. He signed his entry-level contract with the Bruins and reported to Providence. Frederic’s first taste of professional hockey was a good one. In 13 games with the Providence Bruins, he netted 5 goals and tallied 3 assists for 8 total points and had a +3 rating. In 3 playoff games with Providence, he tallied 1 assist for 1 total point and had a –4 rating. Overall this was a successful second year since being drafted for Frederic. One guy Frederic idolized was fellow Bruin David Backes. Trent is from St. Louis and grew up watching David play. This was someone he tried to mirror his game after and this season he even drew some comparisons to him.

Trent Frederic scores his 1st-career goal in the AHL off the 2-on-1 rush with Czarnik. Frederic carried the puck from the defensive-end with his head up the whole way. His pass didnt get through but he stuck with it and roofed the loose-puck. #NHLBruins pic.twitter.com/CzgxRyAA7w

Going into this season, Frederic was one of the players in camp that were competing for the Third Line Center position for the Boston Bruins. He was competing with fellow prospects Jake Studnicka and Jakob Forsbacka-Karlsson. He played well in pre-season camp, but ultimately was part of the last round of cuts heading into the season and he went down to Providence. Since then he has pocketed 5 goals and tallied 0 assists for 5 total points and a rating of 0 in 13 games with the AHL squad. Though his total scoring pace is down a little from his time in Providence last year, he is still developing well and showing that good two-way ability at center.

While he didn’t exactly garner a lot of praise after being drafted, Trent Frederic has turned that around and really given us a glimpse of why the Bruins drafted him so high in the 2016 NHL Draft. He has good size and strength and displayed that he can be a good two-way center. Not only that he has shown that he has good leadership abilities and isn’t afraid to take on that role with a hockey club. It’s also important to note that Frederic is only just 20 years old. He is going to continue to develop and get better. I believe that he should spend all this season in Providence and next year we can expect some great things from Trent with the Bruins in Boston. Trent may have been someone that people who not have drafted so high in the first round initially, but he’s turned himself into a player that teams will have wished they took a chance on.