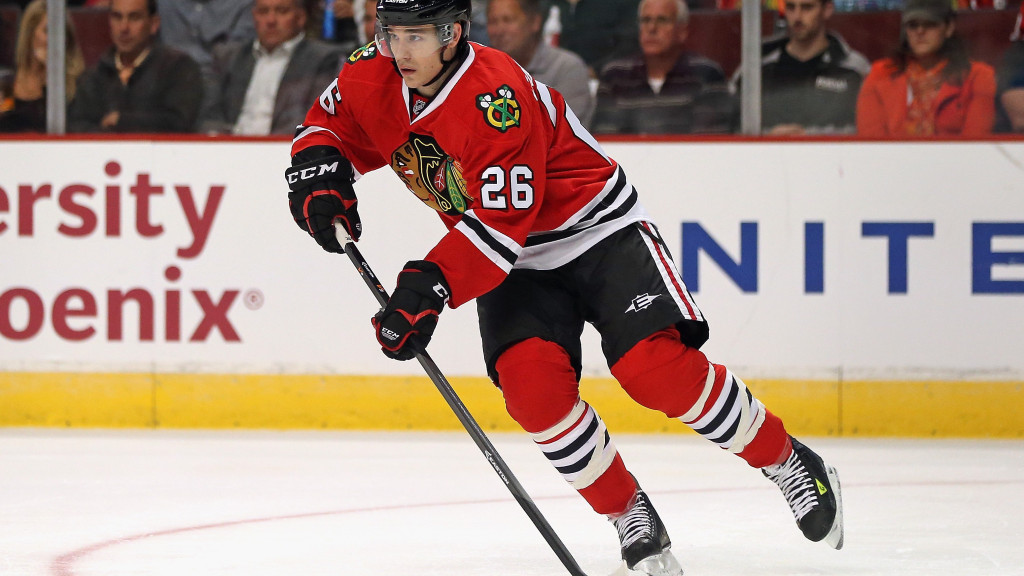 Per Mark Divver of the Providence Journal, the Providence Bruins have signed defenseman Kyle Cumiskey to a PTO. Providence’s defense is depleted due to injuries to the Bruins’ NHL roster, as Zdeno Chara, Charlie McAvoy, Kevan Miller, Brandon Carlo, John Moore, and Urho Vaakanainen are all out of the lineup for various reasons. This ridiculous string of bad injury luck has caused Jeremy Lauzon, Connor Clifton, and Jakub Zboril to be called up to Boston to fill all of the holes left in the Bruins’ roster.

Yesterday, Kyle Cumiskey was loaned to Providence from the Newfoundland Growlers of the ECHL, and Divver reported today that Providence has signed Cumiskey to a PTO. Selected by the Colorado Avalanche in the seventh round in the 2005 NHL Entry Draft, Cumiskey is a smooth-skating defenseman who has had trouble with hip injuries in the past.

Cumiskey has an interesting history as he has jumped continents several times and has been plagued by injury. His professional hockey career began in 2006-07 when he played most of the season for the Albany River Rats and appeared in nine games for Colorado. Over the next two seasons, Cumiskey was dogged by injuries but split time between the Avalanche and their AHL affiliate, the Lake Erie Monsters, when healthy. He also missed considerable time the following two seasons: a groin injury took him out of the lineup for 17 games in 2007-08, and he missed the final 6 weeks of the season with a shoulder injury in 2008-09.

In 2009-10, he was on the opening night roster for the Avalanche. He spent the entire season with the Avs, playing 61 games that season, scoring 7 goals and assisting on 13, for a total of 20 points. The following season, he was limited to 18 games, due to concussion issues. Before the start of the 2011-12 season, the Avs and Cumiskey agreed to a contraction extension consisting of a one-year, two-way deal. Before the season began,  he was put on waivers and then traded to Anaheim in exchange for defenseman Jake Newton. This move definitely made sense for the Avalanche, as they already had Tyson Barrie, who could be a body double for Cumiskey, except that he’s better offensively and in his own end.

Cumiskey was called up to Anaheim a few times but never played an NHL game for the Ducks. He ended up spending the majority of the time skating for their AHL affiliate in Syracuse, the Crunch. Leading up to the 2012-13 lockout season, the Ducks still owned Cumiskey’s NHL rights, but Cumiskey decided to sign with MoDo in Sweden. In his first year skating for MoDo, he scored 32 points in 46 games and was fifth in league scoring among defensemen. At the end of the 2013 season, the Ducks came calling again, and the two parties agreed to Cumiskey making a return to Anaheim and North American hockey. After training camp, he was sent down to Norfolk in the AHL. Cumiskey and the Ducks then agreed to mutually terminate his contract so he could return to Sweden, where he scored 28 points in 45 games for MoDo the following season.

In July of 2014, Cumiskey agreed to a one-year, two-way contract with the Chicago Blackhawks, returning to the NHL once more. He began the season with the Blackhawks but by mid-October, he was assigned to Rockford of the AHL. The following February, Cumiskey was recalled and played his first NHL game in four years. After seven scoreless games, he was sent back down to the AHL but was recalled once again, for Chicago’s playoff run, playing his first NHL postseason game against his former team, the Ducks. He was mainly used as a seventh defenseman, but dressed for three Stanley Cup Final games against Tampa Bay, helping the Blackhawks win the Stanley Cup for the third time in six seasons.

After winning the Cup, Cumiskey had surgery in the offseason. His contract had expired and the Blackhawks invited him to camp on a PTO. That October, he signed a one-year contract with Chicago and was assigned to their AHL team in Rockford. He only played in 17 games that season, though, as he was bitten by the injury bug once again. Hitting free agency the next summer, Cumiskey opted to return to Sweden, and he signed with Skelleftea AIK, as MoDo had been demoted to Hockey Allsvenskan, a lower league than the SHL. Before the 2016-17 season, Cumiskey had offseason surgery again and only played a dozen games before he and Skelleftea mutually agreed to terminate his contract.

Cumiskey took the following season off and attended the Toronto Marlies’ training camp as a tryout in September of this year. He was signed to a PTO and only played in one game for the Marlies before being released due to a full roster, causing him to sign with the Newfoundland Growlers of the ECHL, where he played 11 games, notching nine assists before being loaned to Providence of the AHL.