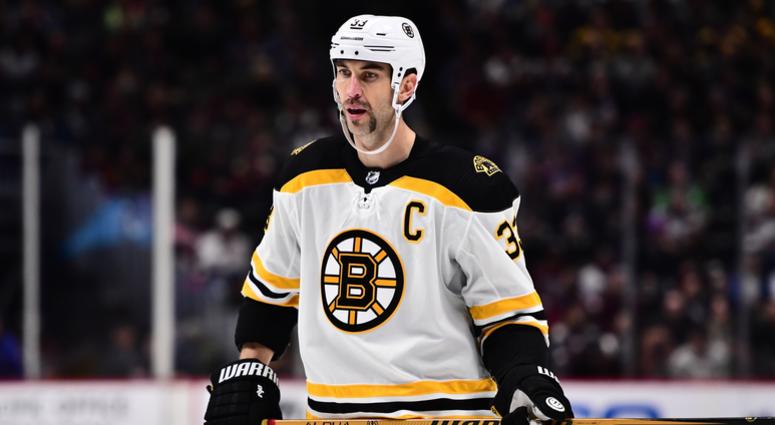 During Wednesday night’s tilt against the Colorado Avalanche, former Bruin Carl Soderberg had just dished out the puck at the Bruins’ blue line as Bruins captain Zdeno Chara was advancing toward him. Chara made the check and hit Soderberg square on the back. As he did, the resulting impact caused Chara’s left knee to cave inward. He left the game immediately following Jake DeBrusk’s second goal of the night, a little less than 30 seconds after the incident.

Might be the play where Chara went down with an injury. Not a good look on that knee. pic.twitter.com/EuYblCreVX

Chara traveled to Dallas with the team after Wednesday’s loss to the Avalanche in Colorado, but instead of staying for the remainder of the trip, he has returned to Boston to have his knee evaluated by team medical staff. Perhaps Bruins fans can take a little bit of comfort from the fact that Chara left the rink unaided and did not appear to be badly injured, but there’s no telling what an evaluation can reveal. Hopefully, it’s relatively minor, as injuries to the Bruins’ blue line are beginning to pile up.

Zdeno Chara spotted walking out of building. Was not aided by crutches. No apparent brace. Not limping heavily.

Currently, the Bruins’ defense corps is decimated, with Kevan Miller out (hand), Charlie McAvoy sidelined with a concussion, and most recently, Brandon Carlo placed on injured reserve (upper body injury) and did not travel with the team. It was initially thought that Carlo’s injury was minor as he was questionable for Sunday’s home game against the Vegas Golden Knights, but it looks like it may be a little more significant than it seemed at first glance.

Injuries to these three defensemen have thrown the Bruins’ defensive pairings out of whack, and adding Chara to the list means the Bruins do not have either of their top pair available. They are also missing one from their second pair (Carlo), s well as one from the third pair (Miller). Jeremy Lauzon was called back up from Providence a week ago and played the last two games with Boston. 2015 first round pick Jakub Zboril was called up following Carlo’s injury. Should Zboril make it into the lineup (which is likely at this point), it will be his first rodeo, as he has yet to make an appearance in the National Hockey League.

Won't have time to write about this, but #NHLBruins call-up Zboril said he got the news about joining Boston while taking his girlfriend to airport in Boston. Also said he started sweating immediately. Funny kid.

The entire right side of the Bruins’ defense is injured in McAvoy, Carlo, and Miller, and with Chara out, now their top left defenseman is out as well. This leaves the Bruins with a defensive corps consisting of Torey Krug, John Moore, Matt Grzelcyk, seventh defenseman Steve Kampfer, and Providence Bruin callups Jeremy Lauzon and Jakub Zboril. After Chara left the game in the second period Wednesday, the wheels fell off, and the Bruins gave up five unanswered goals. Hopefully, with a little time to practice together and for coach Bruce Cassidy to figure out the pairings, things will come together and the defense will be less leaky than it was for the second half of Wednesday night’s game, as the Bruins will undoubtedly feel the loss of Chara.

For all the geniuses who downplay Zdeno Chara's value or say that he should retire, we'll use the last few weeks leading up to the Colorado game as an object lesson go8ng forward. Handful of D out and they were OK. He gets hurt and they fold like a cheap tent vs. Avs.