As the NHL looks to expand its outreach to the European markets, many players were welcomed back to the third annual NHL/NHLPA European Player Media Tour. Boston Bruins forward David Pastrnak (Czech Republic) was invited once again to participate in the event. Bruins own Joakim Nordstrom (Sweden) also represented the Black and Gold during the Media Tour for another edition of Bruins #BearTracks.

Since its inception in 2017, the tour is held in Stockholm, Sweden at the headquarters of Viasat- where the NHL’s international media rights are held. The tour features 23 European-born players being interviewed by dozens of media outlets as a means of promoting  NHL Games. To help the leagues effort to appeal to the growing European fanbase, the NHL purposely changed start times of many weekend games, so that fans will get to enjoy watching them at a more reasonable time (prior to the change, games with start times of 7:30 PM in the U.S. would be aired at 1:30 AM in Sweden). With new earlier start times in the U.S., games would fall into prime evening hours for Europe. 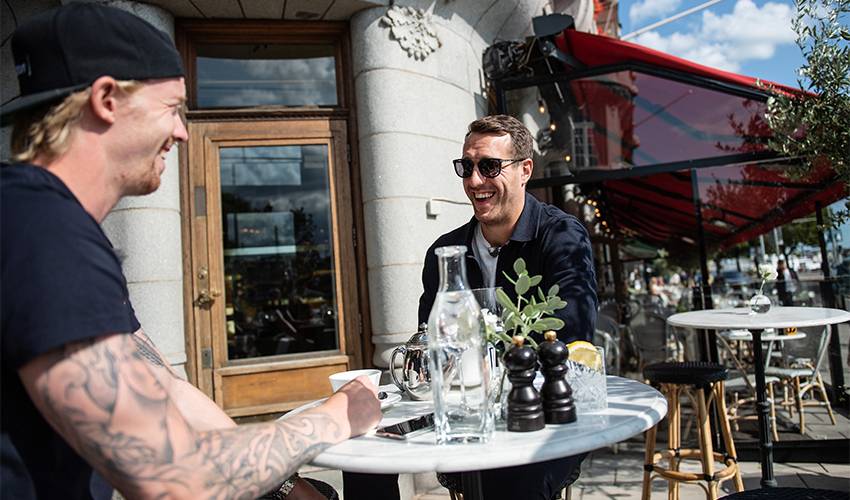 With the NHL continuing to grow the game through Europe and in China, their efforts have garnered much buzz, especially if you consider that this year will the mark the third time professional teams will travel to Europe to play regular season games. On October 4th, the Chicago Blackhawks play the Philadelphia Flyers in the Czech Republic, while on November 9th,  the Buffalo Sabres face the Tampa Bay Lightning in Stockholm, Sweden.

.@Jo92No is also hanging out here in his hometown of Stockholm for the @NHL’s European Media Tour. #BearTracks2019 pic.twitter.com/QVEj9EMfZm

Joakim Nordstrom served as “tour guide” as he hosted Pastrnak in his native Sweden. Both players participated in photo shoots and interviews for the event. Not one to shy away,  the 22-year-old Pastrnak was all smiles in front of the camera-there’s also that video showing off his “dance” skills… Please enjoy:

📍 Stockholm, Sweden@pastrnak96 and @Jo92No are having some fun at the @NHL's European Media Tour: pic.twitter.com/UD7TCnBiiw

In his hometown of Trencin, Slovakia Bruins Captain and age-less wonder Zdeno Chara continued with his charitable contributions. In a partnership with New Balance, the 42-year-old defenseman has collected and donated shoes that help benefit those in need throughout  Boston and Slovakia. Chara first partnered up with organization this past March along with Soles4Souls-a Nashville-based non-profit organization that aims to give those in need a pair of shoes. To date, Soles4Souls have donated over 35 million pairs of shoes in 127 countries. Fans were able to donate new or used shoes to New Balance stores or at the Warrior Ice rink. The Bruins also held a shoe drive this past March at the Garden.

The Bruins #BeartTracks followed Chara as he headed back to Slovakia, bringing a portion of the donated shoes that were collected at the TD Garden.  The 42-year-old Slovak-native was seen delivering shoes to many children in his hometown:

Big Zee is back at it today in his native Slovakia, donating shoes to those in need alongside @newbalance, @NBGivesBack, and @WarriorHockey.#BearTracks2019 | #NHLBruins pic.twitter.com/pJ2jYwbZzf

“I saw those smiles and how happy those kids were. That made my day.”

There's no place like home for Zdeno Chara, who teamed up with @newbalance for a shoe donation in his native Slovakia 👞 👟: pic.twitter.com/i2yOoGiw8Y

And while Bruins fans eagerly await for the puck to drop officially in October, rest assured the guys are gearing up and getting back into fighting shape. Not to be outdone from last year’s  insane workout session in Slovakia, this time Chara did not skip a beat while hanging out in his native country. In case you’re wondering, he’s still a beast: