By: Evan Michael | Follow me on Twitter @00EvanMichael
When you look up and see the half-dozen Stanley Cup banners hanging high above the TD Garden ice, you can’t help but feel a sense of pride, admiration and accomplishment for the Boston Bruins. “An Original Six got six,” as my late grandfather belovedly bellowed after watching Zdeno Chara celebrate like a champion in 2011. 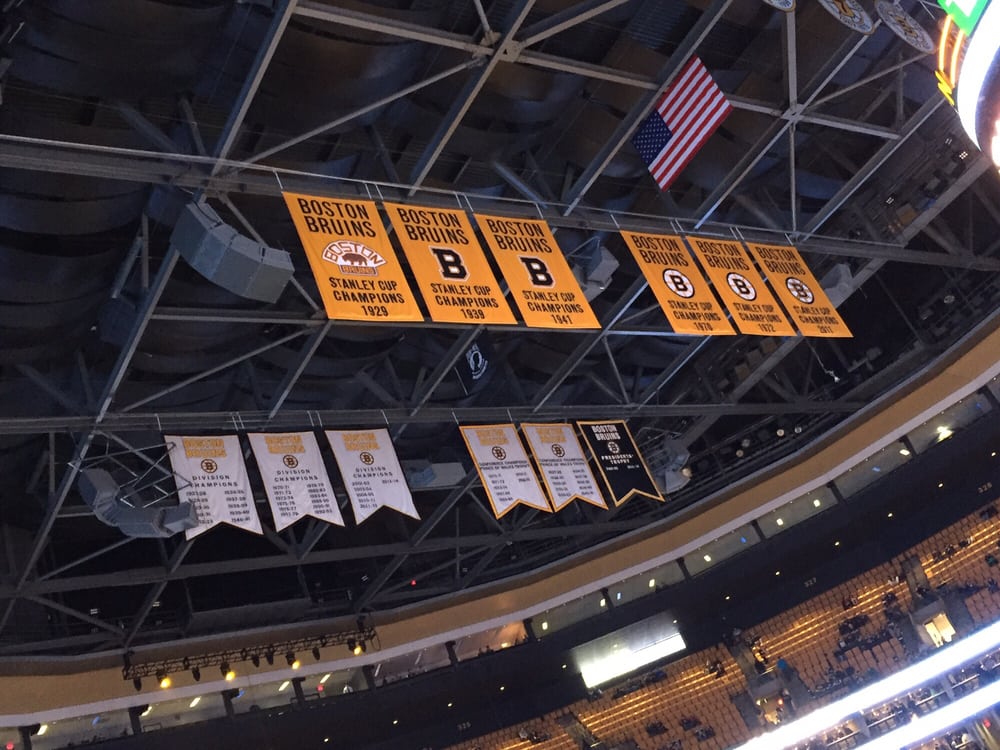 But, there are some other banners that, if you pay them close attention, aren’t really as celebratory, or dare I say champion, as they seem. That’s because they reflect all the times the B’s have fallen short of hockey’s ultimate quest.
Some are marked by the Prince of Wales Trophy designation (for winning the Eastern Conference)… others the old Adams Division… even a few for the woefully unreliable Presidents’ Trophy acknowledgement.
What they all share in common is a familiar heartbreak for hockey fans in the Hub. One that began in 1927 at the hands of the original Ottawa Senators and was most recently relived courtesy of the cutthroat St. Louis Blues this past June of 2019.
In the 92 years in between, there were twelve other occasions where the B’s — from Brown N’ Gold to Black N’ Gold (with some honey and/or yellow mustards thrown in for forgettable measure) — played runners-up to the Cup.
That’s a lackluster record of six and fourteen. Or, typed out in a style that’s hard to miss, 6 – 14. That’s right, only 6 Ws compared to 14 Ls, all when competing for Lord Stanley’s coveted silver chalice.
And for some oddly annoying and historically humdrum reason, they seam to happen in spurts of two, all within a few short years of each other (or in modern-day terminology — during the same winning window). “Two” wit:

As you can see from above, even the outlier losing years were awfully close to the runners-up sequencing. Even hockey insiders like “Joey Mac” from The Athletic Boston have a hard time not noticing these unfortunate oh-so-close-to-glory trends.

“From a contender to more of a favorite” and why the Bruins face an unprecedented challenge this season. New from @TheAthleticBOS. https://t.co/xp6hYugEIj

Speaking of things not to glorify (a certain similar-sounding serendipitous song from St. Louis being one of them), McDonald’s article also points out the uphill battle the B’s now face in order to bounce back from a Stanley Cup-losing season.
As he mentions, no team in the modern-day NHL — a term we all keep going back to for six original reasons — has ever won the year after they’ve lost in a Game 7 final. Not even powerhouse teams of their respective eras like the Blackhawks, Devils & Red Wings.
Call it a hangover… call it depression… call it flat out not being as good (or as lucky) the following season, but history sure doesn’t seem to line up on the side of the B’s lineup in 2019-2020. But, maybe that’s exactly what the doctor ordered for Boston.
Maybe that’s exactly the kind of motivation this very talented team needs to get over the Cup hump one more time in the Chara/Bergeron Era. I know the aforementioned Mr. McDonald thinks so, and he isn’t even old and on the farm yet.

And considering the Bruins have one of the best farm systems in all of hockey, to steal a term made popular by their crosstown cohorts the Boston Red Sox, there’s a lot to be excited about both now and for future Cup runs in Boston.
Yet, if the Bruins really want their “Cup to runneth over”, especially during an upcoming season filled with plenty of historical harbingers and unsatisfactory stats as outlined above, then what they’ll need more than ever is the ability to forget — something history has made hard to do.
Thankfully (and regrettably at the same time) it’s history everyone wearing the spoked-B, or any “B” for that matter since 1927, has grown accustomed to — from Eddie Shore to Bobby Orr. From Cameron Neely to Donny Sweeney. From Uncle Milt to Tuukka’s guilt. The B’s know losing, especially in heartbreaking ways, whether we want to admit it or not.
So, how’s this for a banner statement: maybe NOT looking up to the TD Garden rafters this year will be what’s best for the B’s. Then, they can truly “look forward” to what every runner-up has ever wanted: an immediate next shot at the Cup!