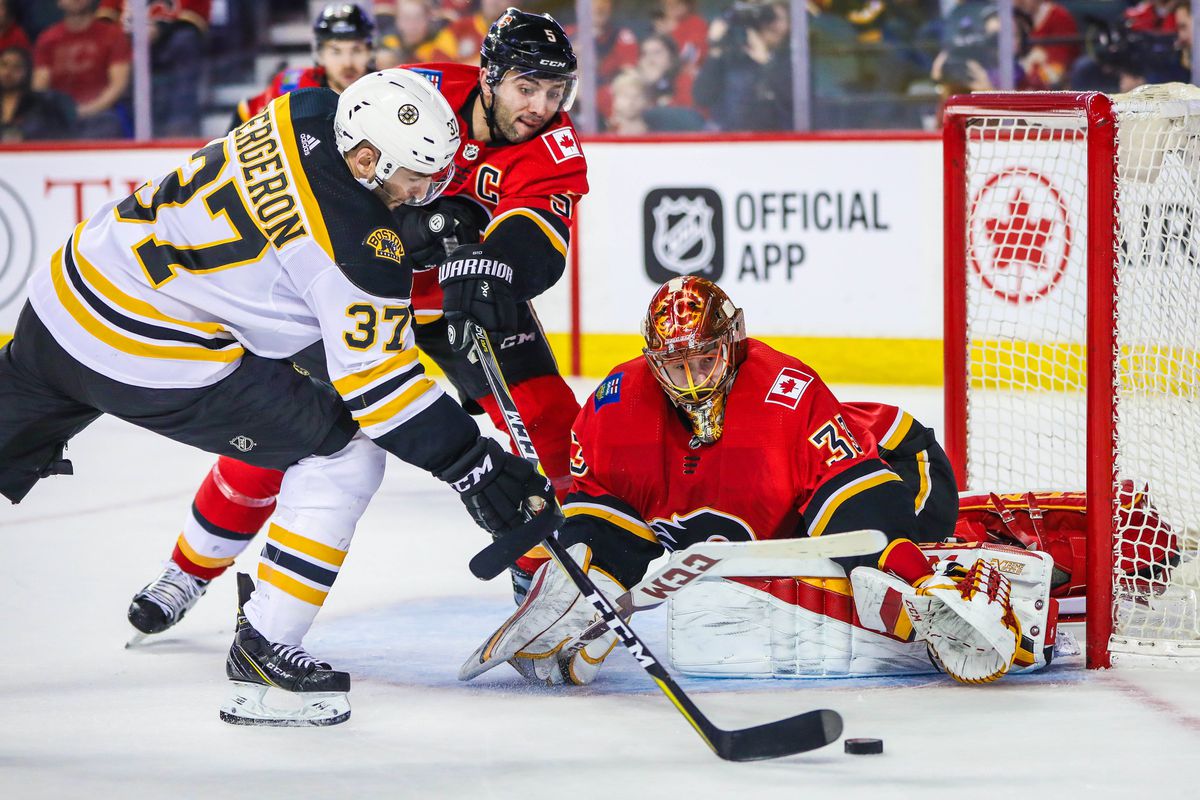 In tonight’s first game of a back-to-back, the Boston Bruins face the Calgary Flames in game three of their three-game road trip. On Wednesday, the Bruins defeated the Edmonton Oilers 2-1 in overtime to secure their fourth consecutive victory and improved their record to 9-1-0 since returning from their week-long break. The Bruins are first in the league standings with a 38-11-12 record, three points ahead of the Tampa Bay Lightning.

For Calgary, they come into tonight’s game following a 6-4 win over the Anaheim Ducks on home-ice earlier in the week. The Flames are currently engaged in a tight battle in the Western Conference playoff picture, sitting only two points out of a potential playoff spot as of right now. However, a win over the Bruins tonight would put them in the second position in the competitive Pacific division.

Anton Blidh in on the fourth line for Joakim Nordstrom. #NHLBruins pic.twitter.com/378j12NXQ1

Not much has changed from the Oilers game earlier this week, however, the roles of Danton Heinen and Karson Kuhlman have switched. Jaroslav Halak gets the start and Anton Blidh enters the lineup for Joakim Nordstrom.

Ondrej Kase, the acquisition of the Bruins today, will not play tonight or tomorrow against the Vancouver Canucks. The former Ducks forward will join the team back in Boston next week.

Not a good start for the Bruins as only twenty seconds into the game, the Flames bring it into the zone and fire it at Halak. The opening shot missed the net wide, setting up a brilliant chance for Rasmus Andersson who’s in-tight shot gets stopped by Halak. However, the rebound goes right to Mikael Backlund who buries it past the Bruins goaltender to give the Flames an early 1-0 lead.

Not the best way to start a game#NHLBruins– 0#Flames– 1 pic.twitter.com/EmH270VlfL

Only a few minutes later, the Flames do an excellent job turning a defensive stop into an offensive 2-on-1 that ends up leading to a blast of a shot from Backlund that beats Halak clean for his second of the game and the Flames explode for a two-goal lead in this game.

Only 24 seconds after that, however, a dump-in by the Bruins bounces right into the slot in front of Cam Talbot where Patrice Bergeron picks up the loose rubber and buries it past the former Oilers netminder to cut into Calgary’s early lead. Bergeron’s 28th of the season makes this a 2-1 hockey game.

Did you think the goal scoring was done there? Nope. Only seconds after Bergeron’s tally, Johnny Gaudreau enters the zone on a rush, tossing the puck towards the middle of the ice. The puck takes an odd bounce and confuses Halak, giving the Flames a two-goal lead almost immediately after the Bruins scored themselves.

The two teams play for another three minutes before the Bruins start to cycle the puck around the Calgary defensive zone. Marchand feeds the puck back to McAvoy on the point who makes a quick feed to Pastrnak in the high slot for a one-timer. Pastrnak’s shot was stopped, but the rebound went directly to Bergeron in front and he scores his second of the game to make this one a 3-2 game.

Make it 7 goals over 7 games for Patrice Bergeron now.

With a lot of these high-scoring games, the intensity of each and every play increase immensely. Flames forward Tobias Rieder skates through the neutral zone only to meet Bruins defenseman Matt Grzelcyk who finishes his check. The on-ice officials didn’t like the collision and send Grzelcyk to the box for elbowing. Bruins successfully make the kill on the first penalty of the game.

Later in the frame, Anders Bjork blocks a shot in his own end, allowing Karson Kuhlman to make a great pass up the ice to Charlie Coyle who finds himself all alone on a breakaway. After a few nifty moves, Coyle roofs the forehand past Talbot for his 15th goal of the campaign and this crazy game is equal at three apiece.

Mere shifts after the tying goal, Charlie Coyle gets put on another partial breakaway but cannot bury the puck around Talbot and neither can Heinen on a pair of rebound chances. Bruins have taken the momentum of this game and are running with it through the ending minutes of the period.

Less than a minute into the second period of play, the Bruins get early possession in the Flames’ zone leading to Brandon Carlo throwing a shot on goal. Brad Marchand managed to twist his body and deflect the puck past Talbot to give the Bruins their first lead of the game and it’s 4-3. The goal is Marchand’s 24th of the season, giving Carlo his 14th assist and Krug his 33rd assist of 2019-20.

Later on in the period, the Bruins are getting the better of the offensive chances as Wagner takes a rocket of a shot towards the open cage off of a great pass from Charlie McAvoy but it bounces around off of the Flames in front of Talbot before hitting the outside of the net. Extremely close opportunity for the Bruins to take a two-goal lead in this now quite defensive game.

Just past the halfway mark of the game we see the intensity boil over between Jeremy Lauzon and Matthew Tkachuk. Throughout the game thus far, the two have been barking at each other until finally, off of a faceoff, they agree to drop the gloves. Lauzon managed decently to land a couple shots on the now-familiar NHL tough guy before getting taken down. Tkachuk was standing up for Mangiapane, but both Lauzon and Tkachuk get five minutes in the box for fighting.

A much, much better period for the Boston Bruins while the Calgary Flames looked behind the B’s for the majority of the frame. Bruce Cassidy must have calmed the players down following the first intermission because there were noticeable improvements on defense for Boston.

Boston came out with some good chances again to begin the final regulation period but all of a sudden, Cam Talbot is playing solid goaltending in between the pipes for the Flames. Just under six minutes into the frame, Derek Ryan carries the puck through the neutral zone, cutting aggressively towards the center of the ice.

Patrice Bergeron ends up getting his stick caught in his skates and Boston’s number-one penalty-killer will sit in the box for two minutes for tripping. Flames passed the pucked around the zone quite a lot but failed to get any real chances other than a bomb of a one-timer that was blocked by Lauzon. Back to even-strength.

Calgary’s urgency to tie this game as the minutes tick away has become more and more apparent. Gaudreau had a great chance on a speedy rush down along the boards but thanks to a combination of Jaroslav Halak and great backcheck from Charlie McAvoy, Gaudreau was never able to get the shot off and the Bruins hold onto the one-goal lead.

Boston is right back at it tomorrow against the Vancouver Canucks in Vancouver, British Columbia, Canada.