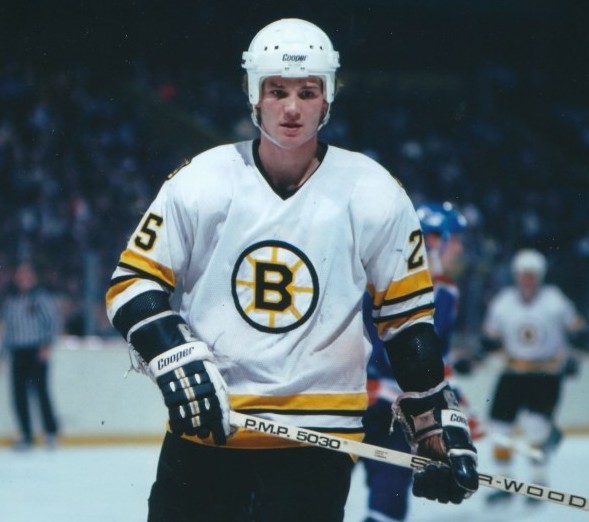 Mike was born on April 27th, 1960, in Montreal, Quebec, Canada and played his junior hockey nearby with the Montreal Juniors club in the QMJHL. Per HockeyReference.com his last two seasons in the “Q” he posted 54-89-143 numbers from the 1978-79 to 1979-80 seasons. At the age of 19-years-old, the 6′-2″ 200-pound forward was drafted by the Boston Bruins in the sixth round (120th Overall) in the 1979 National Hockey League Entry Draft held that year at the Queen Elizabeth Hotel in downtown Montreal.

The big left shooting forward had the ability to play center and left-wing and started his professional hockey career after leaving his QMJHL Montreal Junior club playing in the United States in the Bruins minor-pro system. As a 20-year-old Krushelnyski joined the Springfield Indians of the American Hockey League and was close by in the state of Massachusetts if he were needed to be called upon if an emergency call-up was needed with Boston only being about an hour and a half away. With the storied AHL Indians team, he would appear in 80 games posting 25-28-53 numbers during the 1980-81 season. The following year the NHL Bruins moved their AHL minor-pro affiliations from the Springfield Indians to the Erie Blades in the state of Pennsylvania.

Mike would get his first taste of NHL hockey when he made his debut against the Montreal Canadiens on October 24th, 1981, and appeared in 17 games for the Boston Bruins to start the season 1981-82 season. In his first NHL action, he would go onto post 3-3-6 totals with two even-strength goals and a shorthanded tally. Krushelynski was sent back to the minors to finish the hockey season with Erie and had his best career year in the minor-pro ranks posting 31-52-83 numbers in 62 games for the Blades during the 1981-82 season.

The following season to start the 1982-83 season, Krushelynski would enter his first full season of NHL action with Boston and wouldn’t look back as he would go onto play the next 13 seasons in the top hockey league in the world. In his rookie year with the Bruins, Mike posted 23-42-65 numbers in 79 games. He would take a dip in point production in his second full season with Boston contributing 25-20-45 totals which would be his last full season with the Bruins before landing himself in the province of Alberta, Canada via trade.

After appearing in 162 games for the Bruins and posting 51-65-116 numbers in three years of service, he was traded to the Edmonton Oilers on June 21st, 1984, for the original “rat” Ken Linseman. After playing for the Oilers for the next four seasons, Krushelynski would be involved in another trade, one that shook the hockey world. On August 9th, 1988, Mike would be involved in a trade to the Los Angeles Kings that sent the “Great One” Wayne Gretzky, and Marty McSorley to the bright lights of Hollywood, California.

31 years ago today, The Trade:

Krushelynski would retire from the game after the 1995 season playing for the Boston Bruins, Edmonton Oilers, Los Angeles Kings, Toronto Maple Leafs, and finally the Detriot Red Wings. His NHL totals throughout his career were 241-328-569 in 897 games. Mike would go onto win three Stanley Cups as a player and one as an assistant coach with the Red Wings organization.

Check out the new Black N’ Gold Hockey Podcast episode 175 that we recorded below on 4-19-20! You can find our show on many worldwide platforms such as Apple Podcasts, Google Podcasts, iHeart Radio, Spotify, SoundCloud, and Stitcher.