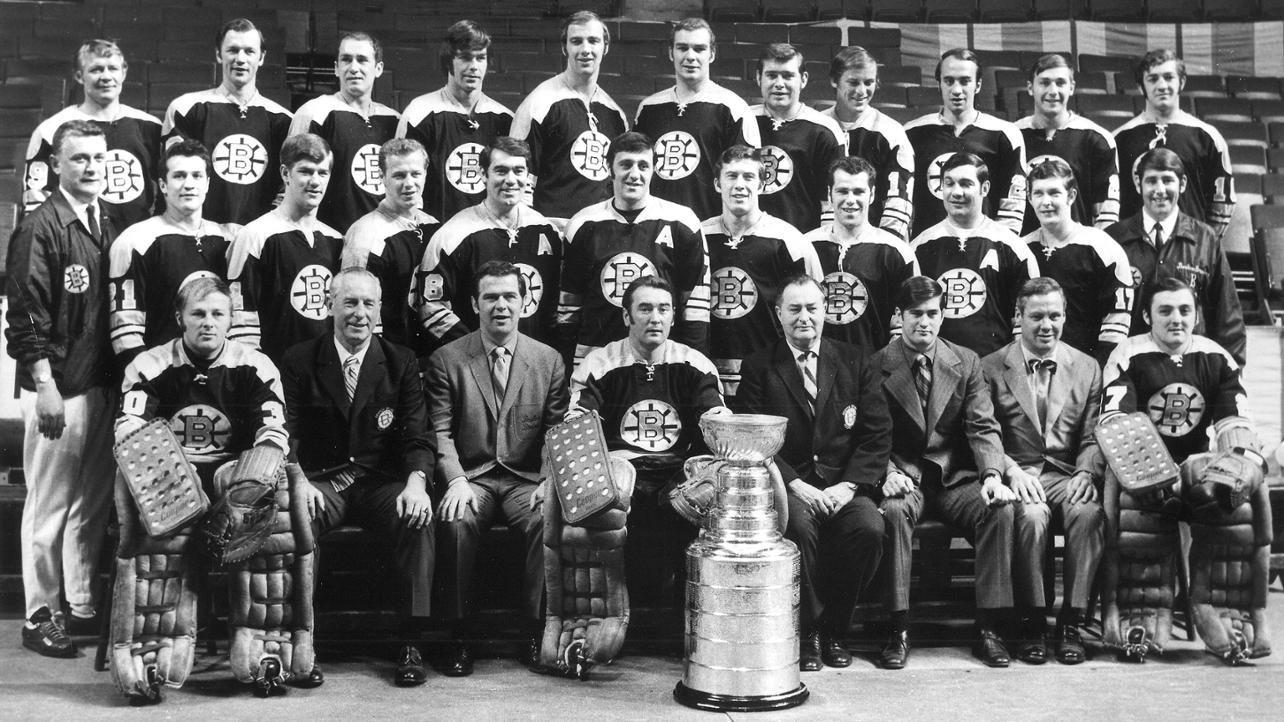 While Americans have the Fourth of July, us Canadians celebrate Canada Day today, July 1st. In honour of Canada’s 153rd birthday, I decided to rank the greatest Boston Bruins players that were born in the Great White North. If you missed players ten through six, I highly suggest you click HERE. If you’ve already read the previous installment, we can officially move on to the remainder of the Top Ten Greatest Canadian Boston Bruins of All-Time. So without further ado, let’s dive right into this!

The only current player on this list, Patrice Bergeron is one of the greatest players to ever play for the Boston Bruins franchise. At 34-years-old, Bergeron has the 5th-most goals in Bruins history with 352, the 5th-most assists with 517 and is 6th in Boston Bruins history for most points with 869. Bergeron is also one of only six players to play 1000 games for the franchise, joining Ray Bourque, Johnny Bucyk, Don Sweeney, Wayne Cashman, and Zdeno Chara.

While Bergeron is near the top of most of the statistical leaderboards within the organization, it is not the only reason Bergeron will go down in the history books and will likely have a place in the Hockey Hall-of-Fame when his career is all said and done. Patrice Bergeron is one of, if not the greatest defensive forwards of all-time. The Ancienne-Lorette, Quebec, Canada native has won four Frank J. Selke Trophies – tying him with Bob Gainey for the most in NHL history.

In addition, Patrice Bergeron is apart of the illustrious Triple Gold Club – having won an Olympic Gold (2010, 2014), a World Championship Gold (2004), and a Stanley Cup (2011). Bergeron also continues to be one of the most well-respected players in the National Hockey League – putting respect, class, and sportsmanship before anything else and he is a perfect representative of the Boston Bruins organization.

From the 1967-68 season to the 1976-77 season, Bucyk scored at least 20 goals including a 51-65-110 campaign in 1970-71 at the age of 35. A two-time Stanley Cup winner, Bucyk goes down as one of the best Boston Bruins simply for the time spent in the organization. Even after his retirement at the end of the ’77/’78 season, Bucyk worked with the Bruins’ public relations team as well as doing some colour commentary. Today, The Chief is still an ambassador for the team and just concluded his 62nd season as apart of the Boston Bruins.

John Bucyk’s #9 was retired immediately in 1978 and he was inducted into the Hockey Hall-of-Fame not long after in 1981. Bucyk finished his NHL career with 556-813-1369 numbers, two Stanley Cups, two Lady Byng trophies, and was named to two All-Star teams.

Phil Esposito, born in Sault St. Marie, Ontario, was one of the greatest scorers in not only Boston Bruins history, but NHL history at the time of his playing career. Esposito’s tenure with the Bruins took place for nine seasons, playing in 625 games while scoring an incredible 459-553-1012 numbers during that short time.

Esposito once held the NHL record for most goals scored in a single season with 76 goals in the 1970-71 campaign and while that record would later be passed by Wayne Gretzky, it’s just a small sample size of how talented Esposito was in Boston and how he was a massive piece to Boston’s two Stanley Cup victories in 1970 and 1972. Esposito was a ten-time All-Star, two-time Hart Trophy winner, five-time Art Ross winner, two-time Pearson winner, and was apart of the Hockey Hall-of-Fame Class of 1984.  As a member of the Bruins, Esposito scored 40 or more goals in seven consecutive seasons and 50 or more goals in five straight seasons.

At the international level, Esposito was a big piece to Team Canada in the infamous 1972 Summit Series, finishing the eight-game series against the Soviet Union with the most points with thirteen and tied for most goals with seven. Phil also helped Canada win the 1976 Canada Cup and represented his country in the 1977 IIHF World Championships where Canada finished 4th.

Born in Montreal, Quebec, Canada, Ray Bourque is one of the greatest defensemen to ever play the sport of hockey. Throughout 21 incredible seasons as a member of the Boston Bruins, Bourque amassed 395 goals and 1111 assists for 1506 points. As of the current day, Bourque is the franchise leader in games played (1518), assists, and points.

As mentioned above, Bourque was involved in one of the best moments in Boston Bruins history. As the Bruins were set to raise Phil Esposito’s #7 up into the rafters, Ray Bourque (who took the #7 after Espo’s retirement), skated over to Esposito, took off his #7 sweater and handed it to Esposito. Under the original sweater was Bourque’s new #77 which would later be retired by the Bruins after Bourque’s own career ended.

Out of the 21 seasons in Boston, he was named an All-Star eighteen times and won the James Norris Trophy as the league’s best defensemen five times. He also won the team’s scoring title on five occasions which included four 90-plus-point performances. Bourque was also well-known around the NHL for his blistering accurate shot, winning eight Accuracy Shooting competitions at the NHL All-Star festivities.

While Bourque never won a Stanley Cup in Boston, he did win a Stanley Cup with the Colorado Avalanche in 2001, further cementing himself as one of the greatest ever at his position. He is still the NHL leader for points as a defenceman and was inducted into the Hockey Hall-of-Fame in 2004.

If you ask anyone to name one legend of the Boston Bruins, 99% of the time they will respond with “Bobby Orr”. Born in Parry Sound, Ontario, Bobby Orr is the greatest Boston Bruin player ever – let alone players born in Canada. While his career was unfortunately cut short due to injuries, his time with the Boston Bruins proved him to be one of the best players the NHL has ever seen.

In 631 regular-season games for the Boston Bruins, Bobby Orr scored 264 goals and 624 assists for 888 points. In only those ten seasons, he won eight straight James Norris trophies as the league’s best defenceman, three Hart trophies, two Art Ross trophies making him the only blueliner to ever win a scoring title, two Conn Smythe trophies as the Most Valuable Player of the playoffs in Boston’s 1970 and 1972 Stanley Cup wins. In addition, Orr was named as an All-Star nine times and was the first NHL player to not only reach 100 assists in a single season but was also the first NHL player to record six-consecutive 100-point campaigns – a feat he accomplished between 1969-70 and 1974-75.

Bobby Orr is also extremely well-known for his infamous “Flying Goal” in Game Four of the Stanley Cup Finals against the St. Louis Blues. The photo of Bobby flying through the air after scoring the game-winning goal that won the Bruins the Stanley Cup in 1970 is synonymous with Boston Bruins culture and every Bruin fan around the globe is proud he was a member of the Boston Bruins. 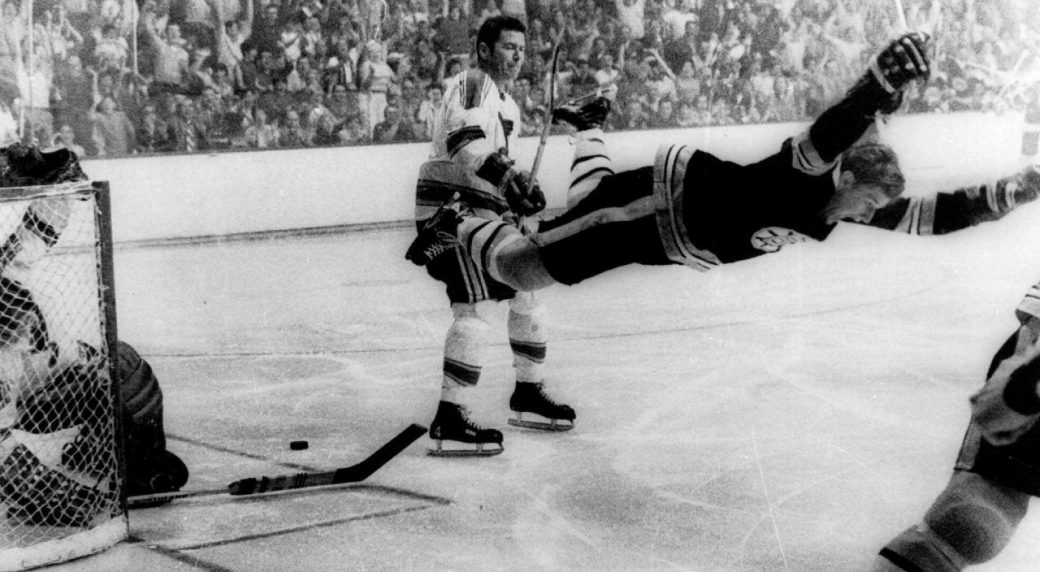 Bobby Orr changed the game of hockey forever. The way he controlled the game with such finesse, skill, and talent as a defenceman was never seen before and has never been replicated to that degree even now. A true athlete that altered the sport of hockey for the better and is truly in the conversation as one of the best hockey players in the history of the National Hockey League.

And with that, the Top Ten Greatest Canadian Boston Bruins of All-Time is now complete. Do you agree with my list? I’d love to hear your thoughts via my Twitter (@tkdmaxbjj). On behalf of the Black n Gold Hockey Podcast crew, Happy Canada Day to all my fellow Canadians!