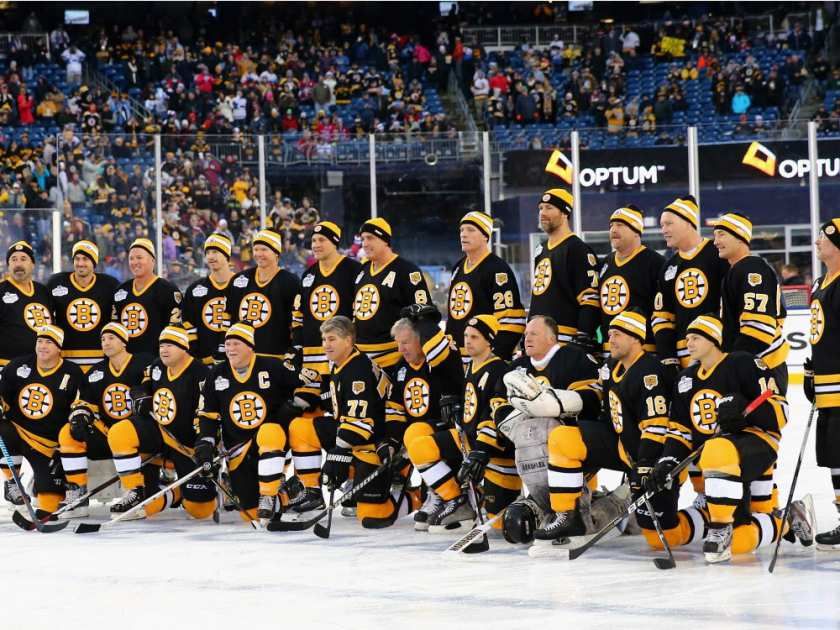 Today, July 1st, 2020 is Canada’s 153rd birthday – more commonly known as Canada Day. In celebration of this historical day, I decided to take a look back on some of the greatest players from the Great White North that dawned that infamous Spoked-B sweater of the Boston Bruins. This list was incredibly difficult to make, but it could make for some fun discussions. Without further ado, let’s dive right into the Top Ten Greatest Canadian Boston Bruins of All-Time!

Born in Fort Qu’Appelle, Saskatchewan on November 25th, 1902, Eddie Shore spent the early years of his life on a horse ranch working hard labor – breaking in ponies, herding stock and hauling grain on the daily. While that may seem like a useless piece of information, those early days helped pave the way for Shore who became known as one of the most physical players during his era.

Immediately at the beginning of his career, Shore’s bruising style controlled the game and in the 1928-29 season, he led the Bruins to first place in the American Division and helped them go undefeated in the playoffs en route to the franchise’s first Stanley Cup in 1929. Shore continued his strong play throughout his career, winning the Hart Trophy in 1933, 1935, 1936, 1938 becoming the first defenceman in NHL history to win four Hart trophies and as of 2020, is still the only defenceman to have won that many times.

On December 22nd, 1933, one of Shore’s most infamous moments occurred. Eddie Shore hit Toronto Maple Leafs’ forward Ace Bailey from behind, causing him to go headfirst into the ice. Bailey was knocked unconscious and his career was ultimately ended right then and there. In retaliation for the hit, Leafs player Red Homer punched Shore in the face, causing Shore to fall onto the ice as well, resulting in seven stitches. The first large-scale benefit game in NHL history took place for Bailey in 1934 which led to Shore and Bailey shaking hands, one of the best showcases of respect in hockey.

Later on in his career, Shore helped bring the Bruins back to championship glory, winning the franchise’s second Stanley Cup – ten years after the first one – in 1939. Shore’s tenacious style was a huge factor in the victory. Shore retired after the 1939-40 season. He played 14 seasons with Boston, scoring 284 points in 551 games and two Stanley Cups. Eddie Shore was inducted into the Hockey Hall-of-Fame in 1947 and his #2 was retired by the Bruins that same year.

Wayne Cashman, born in Kingston, Ontario on June 24th, 1945, played for the Black and Gold for 17 seasons, starting out in the 1964-65 campaign where he skated in one game. Cashman was a solid player for the Bruins, skating on a line with Phil Esposito and Ken Hodge – the line that set an NHL record at the time with 336 points combined. During the Bruins’ Stanley Cup run in 1970, Cashman scored 9 points in 14 games.

During the 1970-71 campaign, Cashman scored 21-58-77 totals in 77 games played for the Bruins, setting a new career-high in points that would later be broken in 1974 when he posted an 84-point season. However, Cashman was never known for his personal statistics. “Cash” was the tough, physical player that battled hard in the boards for pucks and was there to stand up for his teammates – especially Bobby Orr and Phil Esposito. Teammate Derek Sanderson said the following about Cashman:

“You could see a guy go into a corner after the puck, and just before he got to it, he stopped and flinched a bit when he saw Cash. That’s when you knew you got him on the ropes,” – Derek Sanderson

Cashman won a second Stanley Cup with the Bruins in 1972 and went on to play over 1,000 games with the franchise, including the final six seasons as captain, before retiring from playing in 1983 – the final player from the Original Six to retire. Following his playing career, Cashman spent 16 years in various coaching positions throughout the NHL. He ended his coaching career as an assistant with the Bruins in 2006. Wayne Cashman scored 277-516-793 numbers in 1027 games – all for Boston.

Cecil “Tiny” Thompson, born in Sandon, British Columbia, was another member of the early Boston Bruins and is known today as one of the best goaltenders to play for the organization. Throughout eleven seasons in Boston (and two in Detroit) Thompson accumulated 284 wins, 194 losses, 75 ties, and 84 shutouts throughout 553 career NHL games.

As of July 1st, 2020, Thompson is all over the Boston Bruins record books. He ranks second in games played (behind Tuukka Rask), second in wins (behind Tuukka Rask), first in career goals-against-average (1.99), and first in shutouts (74). Thompson’s overall 81 shutouts (7 with Detroit) rank 6th in NHL history. Thompson was apart of Boston’s first Stanley Cup back in 1929 and won a total of four Vezina trophies as the best goaltender in the NHL. He was also named as an All-Star on four occasions as well. 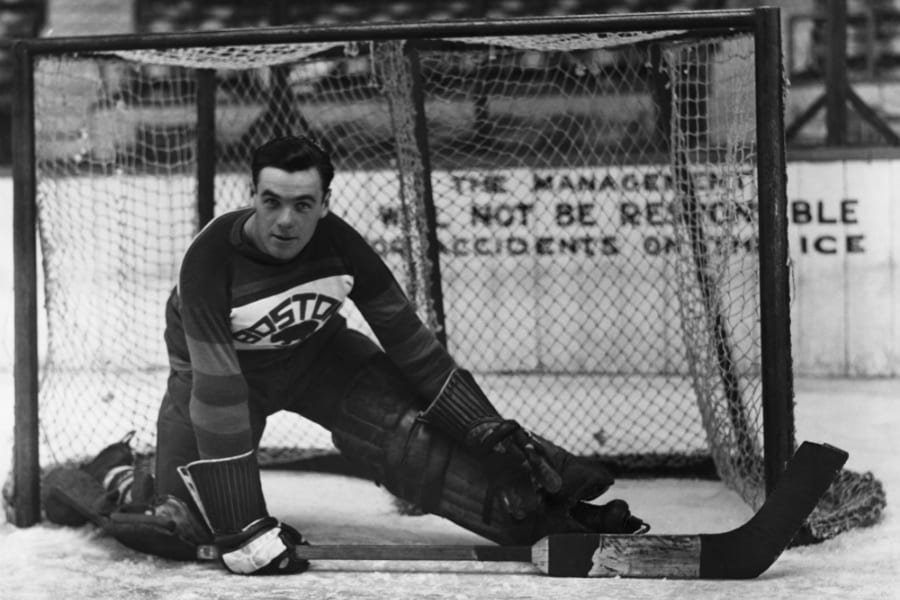 Cecil is also known for being one of the first netminders to perfect and popularize the technique of catching the puck in his glove – known today as a glove save. Before then, it was not common for goalies to grab the puck, but his skill allowed him to do so, paving the way for future players. Also, he was the first NHL goaltender to record an assist back in the 1935-36 season.

Tiny Thompson retired from the National Hockey League after the 1939-40 season. He was inducted into the Hockey Hall-of-Fame in 1959.

Note: It was a true toss-up for me to put either Thompson or Gerry Cheevers. Due to the statistics being slightly in favor of Thompson, I decided to put him instead. However, there is a true argument for Cheevers due to his impact on the Bruins winning the Cup in 1970 and 1972 as well as the sentimental value he holds with Boston Bruins fans.

Rick “Nifty” Middleton was born in Toronto, Ontario back on December 4th, 1953, and is the most recent player to have their number retired by the Boston Bruins as his #16 went into the TD Garden rafters in November 2018. During his 1005-game NHL career (881 with the Bruins), Middleton was one of the better scorers of his generation. As of July 1st, 2020, Middleton is fourth in Bruins all-time points and 3rd all-time in Bruins goals.

From 1978 to 1982, Middleton led the Bruins in points and also led the Bruins in goals for six consecutive seasons. To this day, Middleton’s 19 points in a single playoff series against the Buffalo Sabres still holds as an NHL record and has helped contribute to him being 5th in the Boston Bruins organization for playoff scoring. The reason for “Nifty” being so dangerous? He was one of the best one-on-one players in the league during his career and former teammate Wayne Cashman confirmed that:

In 1005 career regular-season games, Rick Middleton scored 448 goals and 540 assists for 988 points in addition to his 100 points in 111 career playoff games. While the prestigious Stanley Cup managed to stay out of his grasps in his 14-year career, Middleton goes down as one of the best Bruins of his generation and in my opinion, deserves a spot in the Hockey Hall-of-Fame.

A native of Comox, Britsh Columbia, Cam Neely is widely regarded as one of the greatest “power-forwards” in NHL history. In fact, Neely was essentially the first player to be referred to as a power forward in the league and it is genuinely the only proper description of his playstyle. Neely began his NHL career with his home province team of the Vancouver Canucks but only played three seasons before being traded to the Bruins in 1986.

From then, Neely went on to play 525 regular-season games across ten seasons with the Boston Bruins scoring a total of 344 goals and 246 assists for 590 points in the Spoked-B sweater. Neely led the Bruins in goals for seven of those ten campaigns with the help of three 50-goal years (1989-90, 1990-91, 1993-94). Cam’s 55 goals in the ’93/’94 season is still the Bruins’ record for most goals by a winger in a single season and he is the leading playoff goal-scorer in franchise history with 55 goals in 86 postseason contests.

Cam Neely was named an All-Star on four occasions and won the Masterton Trophy in 1993-94 for dedication to the sport of hockey after he scored an incredible 50 goals in only 44 games played after missing a large majority of the previous two seasons due to hip, knee, and thigh injuries. Only Wayne Gretzky has scored 50 goals in fewer games in a single season – showing how dangerous of a threat Cam Neely was offensively.

Unfortunately, injuries forced Neely to retire from playing in 1996 and was inducted into the Hockey Hall-of-Fame in 2005 – one year after his #8 was retired by the Boston Bruins franchise. Cam Neely ended his career with 395 goals, 299 assists, and 694 points in 726 games along with 55-32-87 numbers in 86 playoff games. Today, Cam is the President of the Boston Bruins.

That does it for players ten through six on my list of the Top Ten Greatest Canadian Boston Bruins of All-Time! For the remaining players on this list, make sure to check out blackngoldhockey.com as it will be released on July 1st as well.