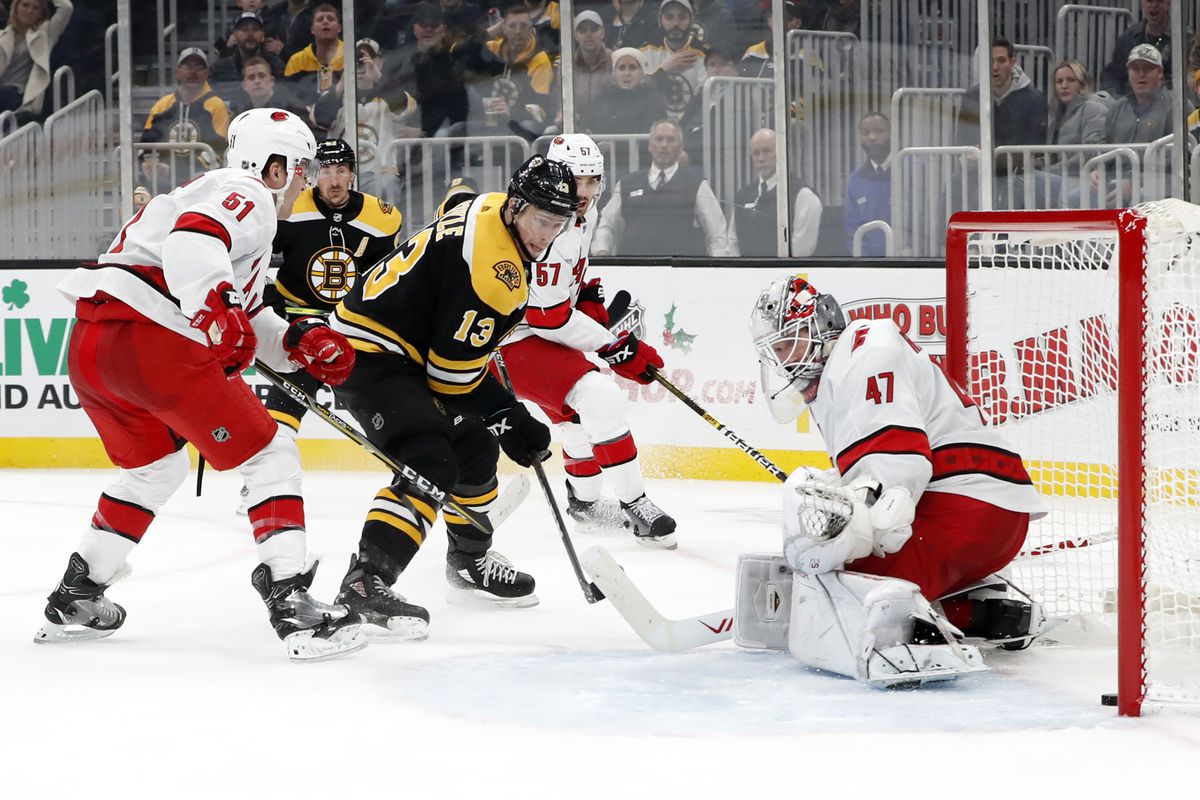 Only two nights ago, the Boston Bruins exploded for four goals in the third period to come back from a 2-0 deficit and take a commanding 3-1 series lead in this Eastern Conference Quarter-Finals series. Tonight, Boston will play their first of three chances to eliminate Carolina in a massive Game Five.

Bruins forward David Pastrnak returns tonight for the first time since Game One while Anders Bjork will be scratched as a result. Jaroslav Halak gets the start in goal.

For Carolina, forward Andrei Svechnikov remains out of the lineup while Jordan Staal stays in after many questions were asked on him playing tonight following a massive hit in Game Four that caused him to leave prematurely. Petr Mrazek gets the starting job for the Hurricanes.

Opposite to the early stages of Game Four, the Boston Bruins look a lot better off the opening puck drop. All lines moving their skates and are making the smart passes and plays to get a few shots on goal. Improved start, will be huge to continue that pressure as this game goes on.

With that said, just about ten minutes into the opening frame, Haydn Fleury unleashes a rocket of a shot that beats Halak just underneath the crossbar. On-ice officials took a second glance to make sure it went in the net and not off the bar and a quick look at the replay shows a perfect shot, 1-0 Hurricanes.

Haydn Fleury puts Carolina ahead just over halfway into the first.

Not long after the game’s first goal, Charlie Coyle races in off the wing and fires a shot that Petr Mrazek stops with the glove. A couple minutes after that chance, David Pastrnak finds himself with the puck alone in the slot and shows off great patience to try and get around Mrazek and lift it over top, but the Carolina netminder makes the stop.

This high-paced first-period continues with a 2-on-1 by the Hurricanes that sees Jaroslav Halak spreading across the entire net mouth to make a great cross-crease save on Justin Williams. It is quite evident this is an elimination game, opportunities on either end, and a much more back-and-forth game in comparison to Monday’s contest.

With just under five minutes to go in the first, the Hurricanes are in the Bruins’ zone trying to set up an offensive zone play and in the midst of that, Charlie McAvoy gets his stick hooked on a Hurricane player, forcing him to sit for the next two minutes on a minor penalty for hooking. Boston’s penalty kill looked solid as they allowed zero shots against and had numerous clearing attempts down the ice. Back to five-on-five.

In the final minutes of the period, the Hurricanes get a few solid chances to bury their second with a couple chaotic shots on net. A chance by Jordan Staal that looks to be going in due to a falling Halak is blocked by David Krejci who slid in out of nowhere. Valient effort to keep this a one-goal game late.

Carolina, looking to extend their lead, comes out strong in the second. Jordan Martinook nearly capitalizes on a 2-on-1, but Brad Marchand used excellent backcheck to interfere with Martinook’s stick, ending the chance. Less than two minutes into the period, David Pastrnak gets called on a hooking minor and Carolina heads to their second power-play.

Carolina got a lot more zone time on that man-advantage and in the dying seconds, nearly gets one past a sprawling Halak but even after multiple rebounds and hacks at the puck, they cannot strike. Zdeno Chara uses his stick to stop the goal and soon after, the Bruins send the puck out of the zone to Pastrnak who just exited the penalty box and is now on a clear breakaway, but trips on Mrazek’s pad and the puck stays out. Chaos once again.

Zdeno Chara stops the Hurricanes from going up 2-0. #NHLBruins pic.twitter.com/m96iccJcx5

Throughout the second period, the Bruins have seemed a bit sluggish while the Hurricanes get more chances on Halak. A lot of missed shots and missed passes, but the chances are there. Then, with about six minutes left to expire in the frame, Bergeron is sent on a partial breakaway but is hooked from behind. Bruins head to the power-play for the first time tonight.

On that man-advantage, David Pastrnak brings the puck into the zone and after numerous quick passes, the shot from Bergeron deflects off Pastrnak’s skate and goes right to David Krejci who hammers it into the open net, Bruins tie it at one.

David Krejci ties it on the powerplay. He now has 7 points so far in this series. #NHLBruins pic.twitter.com/fyhwZs0dFs

With less than a minute to go in the period, Jake DeBrusk barrels his way to the net, gets a shot on net with a rebound there for Ondrej Kase. Kase hits the side of the cage, but is nailed into the boards by Martinook in a clear head hit. Martinook is penalized and Boston goes to the power-play late in the second.

David Pastrnak rips a shot that gets deflected high and with very little time left on the clock, the Hurricanes stop moving as the puck goes behind Mrazek. Bergeron recovers and just fires it towards the net. The puck hits the back of Mrazek’s leg and goes in with three seconds remaining, Boston takes a 2-1 lead with twenty minutes left in this Game Five.

Similar to Game Four, once Boston scores their first goal, the momentum changes entirely. After Krejci’s tying goal, the Bruins were more relentless on the pucks, winning board battles, and made smarter plays, leading to a drawn penalty and another goal. Carolina is likely going to come out flying in the final regulation period with their season on the line.

Very early on in the final regulation period, Warren Foegele gets called on a holding penalty that in my opinion, was a very weak call, but the Bruins go to their third man-advantage of the game as a result of it. However, Carolina’s penalty-kill looked way better on this penalty as they kill it off and the game returns to even-strength three minutes in.

Still, within the first five minutes of the third period, the Bruins take a penalty of their own as the officials wave Joakim Nordstrom down on an interference minor and the B’s go shorthanded for two minutes. Carolina had some good time in the offensive zone and had a brilliant chance for a one-timer in the slot but Vincent Trocheck fanned on the shot and Nordstrom exits the box not long afterward.

As the game ticks on, the Hurricanes keep the aggressiveness all over the Bruins. During a span of heavy Carolina offensive pressure, Charlie McAvoy recovers the puck at the corner boards and as he attempts to skate with the puck, Justin Williams gets his stick in between his legs and takes a tripping minor.

On the ensuing Boston power-play, David Krejci has a wide-open net but somehow fires it off the iron. For the first time in this series, the Bruins’ power-play looks dangerous and the passes within Carolina’s zone were a lot more fluid, almost as it was during the course of the regular season. Penalty ends with no goals scored, back to 5-on-5.

Needing an extra push with 2:05 left in regulation, Rod Brind’Amour pulls Petr Mrazek to go with six skaters down by one goal. Bruins survive until the end, winning 2-1, eliminating Carolina in five games.

The Boston Bruins advance to the second round, joining the Tampa Bay Lightning as the only teams to advance so far from the Eastern Conference. Bruins await winners of WSH/NYI and PHI/MTL series to find out their Round Two opponent.

Check out the new Black N’ Gold Hockey Podcast episode 190 that we recorded below! You can find our show on many worldwide platforms such as Apple Podcasts, Google Podcasts, iHeart Radio, Spotify, SoundCloud, and Stitcher.