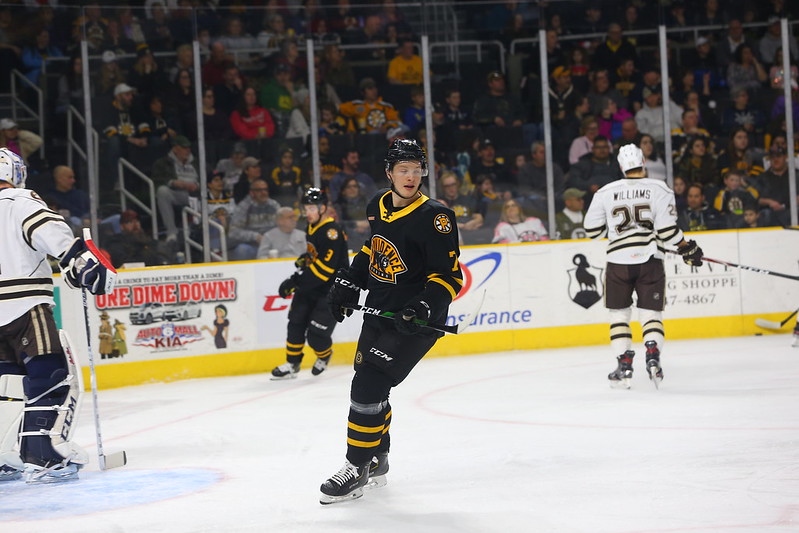 The Boston Bruins may have a lot of young faces on their roster in 2020-2021. An influx of young talent can be exciting for not only the team but the fanbase as well. One guy I believe should on the roster to start the season is Trent Frederic. The young forward came to the Boston organization after being drafted in the first round 29th overall in the 2016 NHL Draft. Before signing his entry-level contract, Frederic spent two seasons at the University of Wisconsin. When drafted, he was thought of as a responsible two-way player who had great hands and scoring ability. Now that you know a little about the player, I am going to dive into why I believe he should be on Boston’s fourth line this season.

Trent Frederic tees one up at the point and scores his eighth of the year. Good patience and poise before ripping this shot hard and low on net. Zboril gets another assist and continues to play the best hockey of his professional career. Extremely encouraging. #NHLBruins pic.twitter.com/rnrPOUCVo2

Trent Frederic had two very successful seasons at the University of Wisconsin, the last of which he served as an alternate captain. In 66 games with the Badgers, he netted 32 goals and dished out 33 assists for 65 total points (stats courtesy of EliteProspects). That is a .98 point per game total (stats courtesy of EliteProspects). Not only did the young forward show off his smooth hands and playmaking ability, but he also showed leadership by wearing the A on his sweater. This is something that the Boston Bruins seem to value quite highly. They’ve had many prospects who have served as either captain or alternate captain on teams they played on before the Bruins organization.

Wasn’t perfect, but watch Trent Frederic’s shift here. He starts by carrying the puck while displaying several flashes of creativity attempting some moves and dekes. Nice use of his size and physicality to disrupt the opposition. Displaying a lot of potential. #NHLBruins pic.twitter.com/SRmCLbaJuS

After the two successful seasons at Wisconsin, Frederic got his first taste of professional hockey during the 2017-18 season. He appeared in 13 games for the Providence Bruins, netting five goals and dishing out three assists for eight total points (stats courtesy of EliteProspects). Coming into the 2018-19 season, the young forward wanted to build on the positive 13 game stretch he had at the end of the previous season. In his first full professional season, the University of Wisconsin Alum played in 55 games with Providence, netting 14 goals while dishing out 11 assists for 25 total points (stats courtesy of EliteProspects). He would also get 15 games in Boston, he didn’t register a point, but he did famously get in a fight in his first game. He also showcased his strength, toughness, and physicality during his time in Boston, which carried over to Providence.

Remember when Trent Frederic did this? He’s baaaaack #NHLBruinspic.twitter.com/EOU8cnr5Hd

Trent Frederic showing off some pretty nice moves along the boards to win this puck and maintain control. Great fighter, but his abilities and skills are overshadowed and underrated. Watch him calmly control this puck and then lose his man by hitting the brakes. #NHLBruins pic.twitter.com/P1WZGF1huc

Trent Frederic’s offensive playmaking ability, defensive awareness, and physicality make him the perfect fit on Boston’s fourth line this season. He can provide the line with some offensive firepower while also providing the grind it out mentality needed to be on Boston’s fourth line. The former first-round pick played in two games with Boston in 2019-2020. He didn’t register on the scoresheet, but he did have eight hits (stats courtesy of EliteProspects). He’s proven he’s not afraid to get into the dirty areas of the ice and throw his body around. Trent Frederic is the ideal upgrade for Boston’s fourth line. I hope everyone is enjoying the off-season. Feel free to send me any comments or questions on Twitter. As always, GO, Bs, GO!