Boston Bruins: Breaking Down a Possible Division Realignment for 2020-21 Season 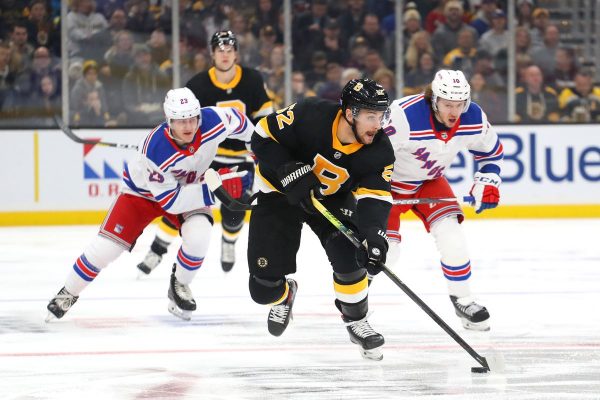 The National Hockey League has a very difficult task at hand to get the 2020-21 regular-season and playoffs underway. With the ideas of having players in a bubble similar to those in Edmonton and Toronto during the 2020 Stanley Cup Playoffs and potentially a shorter season from the normal 82-game schedule – it is not going to be easy to get next season up and running.

One of the biggest hurdles is not so much with the schedule, but with the teams themselves – specifically the ones north of the border in Canada. The seven Canadian teams (Vancouver Canucks, Calgary Flames, Edmonton Oilers, Winnipeg Jets, Ottawa Senators, Toronto Maple Leafs, and Montreal Canadiens) will likely not be able to play the American teams throughout the season as the Canadian government is hesitant to allow the frequent border crossing. The NBA’s Toronto Raptors recently announced that they will be playing their home games during the upcoming 2020-2021 NBA season in Tampa Bay, Florida for that very reason.

The NHL can’t move seven teams to play their home games down in the States without causing a bigger issue. So, as many people have rumoured and imagined, the NHL should likely go ahead with an All-Canadian division. That way, the league could bring back the Edmonton and Toronto bubbles (because of their success during the summer) and those seven teams could play out the season. However, keeping those organizations up north would mean a division realignment for the remaining 24 teams.

ESPN’s Greg Wyshynski (@wyshynski on Twitter) said from what he is hearing, this is what the potential divisions will look like for the 2020-2021 NHL season. For Wyshynski’s article with the latest updates, click HERE.

If this comes to fruition, the Boston Bruins will see a significant change. Essentially, they’ll be thrown into a bunch of Metropolitan teams and will be with none of their usual Atlantic division rivals. Instead, though, they will have some interesting matchups and storylines including a good-ole Original Six opponent in the New York Rangers.

The Buffalo Sabers have not been a great team for the past decade or so. In fact, the Sabres haven’t made the playoffs since the 2010-11 season (nine-straight seasons) and have been near the basement of the league standings in every one of those years. Last season, the Sabres finished with a 30-31-8 record to end the year 6th in the Atlantic Division and 13th in the Eastern Conference. As a result, they won the 8th Overall pick in the 2020 NHL Entry Draft where they selected forward Jack Quinn who has been signed to an entry-level contract.

The offseason, however, was pretty successful on paper. Buffalo was able to snag the number one forward free agent in Taylor Hall to a one-year, $8 million contract – finally getting a big star to play alongside Jack Eichel. They also signed Cody Eakin, Tobias Rieder, and Brandon Davidson while extending many of their own expiring contracts.

During the 2019-20 season, the Bruins matched up against the Buffalo squad three times, each resulting in a Bruins win. Boston outscored the Sabres 9-to-4 combined including a 3-0 shutout on December 27th.

While it may not be as widely accepted, I’d say the Bruins are slowly building a rivalry with the Hurricanes, and now being in the same division as them could only further spark it. The Bruins swept the Canes in four-straight games in the Eastern Conference Finals back in 2019 on their way to the Stanley Cup Finals. Last season, Boston eliminated Carolina once again, this time in five games in the Eastern Conference Quarter-Finals.

In ’19/’20, the Hurricanes finished with a 38-25-5 record, making them the 4th-best team in the Metropolitan Division and 6th in the Eastern Conference. The two teams only met once in the regular season, a game where the Bruins won 2-0 back on December 3rd.

During the offseason, the Hurricanes shied away from signing any of the big-name free agents, but did re-sign defenceman Haydn Fleury and forward Warren Foegele and added Jesper Fast among other depth players. Although, they did lose Justin Williams (retirement), Trevor van Riemsdyk (WSH) and chose not to re-sign Sami Vatanen who remains on the UFA market. The Hurricanes are still a young team with an average age of 26.7 years (5th youngest in NHL) and those young players have even more playoff experience.

Similar to the Sabres, the New Jersey Devils are not what you would call “playoff contenders” by any means whatsoever. New Jersey is coming off of a 28-29-12 season that positioned themselves dead-last in the Metro Division and 3rd-last in the entire conference. The Devils did have three selections in the draft, selecting Alexander Holtz (7th), Dawson Mercer (18th), and Shakir Mukhamadullin (20th) respectively.

When it comes to offseason moves, the Devils have been fairly quiet. They signed two-time Stanley Cup Champion, Corey Crawford to a two-year contract as well as Nick Merkley and Dmitry Kulikov in free agency, but are yet to extend the contracts of RFA goaltender Mackenzie Blackwood and RFA forward Jesper Bratt.

Last year, these two east-coast teams played on three occasions, with Boston winning two of them. Following a 3-0 win in October and a 5-1 win in November, the Devils took a shootout victory on New Year’s Eve 2019.

A once-dominant force in the 1980s, the New York Islanders are looking like another Eastern Conference contender. After losing to the Carolina Hurricanes in the second round in 2019, the Isles had a successful playoff run in 2020, eliminating the Panthers in the play-in round, followed by the Capitals and the Flyers in the preceding rounds before losing to the eventual Stanley Cup Champions, the Tampa Bay Lightning in the Conference Finals.

In 2019-20, New York finished as the fifth-best team in the Metro or 7th in the East with a 35-23-10 record. In the offseason, the Islanders brought in former Bruin forward Austin Czarnik while re-signing Joshua Ho-Sang, Ryan Pulock and Parker Wotherspoon. Their biggest RFA, though, Mathew Barzal, is still unsigned as of November 25th. Barzal scored 19-41-60 totals in 68 games last year.

On Wednesday, the Islanders announced that defenceman and former Boston Bruin Johnny Boychuk is being forced to retire due to an eye injury suffered last season. While it is a terrible outcome, it will free up some cap space for an Islanders team to potentially re-sign Barzal.

In the last NHL campaign, the Bruins played the New York team three times, winning two of them. Boston’s only defeat at the hands of the Isles was on December 19th with the final score being 3-2 in a shootout. The Bruins won the next two straight meetings 3-2 OT and 4-0 respectively.

The only other Original Six team in this rumoured East Division, the New York Rangers, are looking to be one of the most exciting franchises of the future. Not only do they have a dynamite one-two punch of Artemi Panarin and Mika Zibanejad, but they now have the 1st Overall selection of the 2020 draft class in Alexis Lafrenière who signed his entry-level contract last month.

Following a 3-0 sweep at the hands of the Carolina Hurricanes in the 2020 Play-In Round, the Rangers focused their offseason on re-signing expiring contracts. Tony DeAngelo, Alexandar Georgiev, Ryan Strome, Phillip Di Giuseppe, and Brendan Lemieux all re-upped with the Rangers going forward.

When it comes to the regular-season series, the trend continues – the Bruins dominated the Rangers. In three contests with the New York franchise, Boston won every one of them by scores of 7-4, 3-2 in overtime, and 3-1.

Philadelphia entered the league-wide pause as the fourth-best team in the Eastern Conference, but following a round-robin between the conference’s top four teams, the Flyers took the top seed in the East heading into the 2020 Stanley Cup Playoffs. Philly beat the Montreal Canadiens who were fresh off of their upset over the Pittsburgh Penguins only to lose in six games to the New York Islanders.

The Flyers management must have felt they had the right roster to contend once again in 2020-21, as they were one of the quietest teams during the Free Agency Frenzy period. They did re-sign Nolan Patrick but lost Derek Grant, Kurtis Gabriel, Tyler Pitlick, and Nate Thompson to free agency while bringing in depth defensemen Derrick Pouliot and Erik Gustafsson.

For the first time so far, the Bruins have a losing record in the 2019-20 regular-season against a team in this division. Boston lost two of the three games they played against the Flyers, winning in what ended up being the final game of the season – a 2-0 win on March 10th. In the Toronto bubble ahead of the playoffs, the Flyers once again defeated the B’s, winning 4-1 the final score.

To close it all out – we have the 2018 Stanley Cup Champions, the Washington Capitals. Washington had a fantastic shortened campaign, winning 41 games to finish third in the Eastern Conference. Although, the Caps had only two wins once the league went into the bubble format, first winning the final round-robin game against the Bruins and then Game Four over the Islanders in Round One. However, the Capitals were still bounced in only five games.

As a result, a very interesting offseason came through D.C. They fired Head Coach Todd Reirden and hired Peter Laviolette to replace him. Then, the team let perennial goaltender Braden Holtby walk in free agency as he chose to sign with the Vancouver Canucks only to sign former New York Rangers legend Henrik Lundqvist. The Capitals also signed Justin Schultz and Trevor van Riemsdyk during the free agency period.

Washington has seemingly always had the formula to beat the Boston Bruins and they used it many times in 2019-20 winning two of the three games during the season and the lone game in the round-robin. Boston’s only win over Washington last year was a 7-3 victory on December 23rd.

Overall, the Boston Bruins will have a very interesting season ahead of them if this division setup stands strong. In ’19/’20, the B’s had a combined record of 13-1-5, earning 31 out of a possible 38 points. Boston scored 63 goals and allowed only 38 goals against as well. In my opinion, the Bruins could take a top-three spot in this division and I believe it will be a tight race between Boston, Philadelphia, and the Islanders for the number one position.

Regardless, though, the sooner we have hockey the better. The 2019-20 season was wacky in itself, it’s only fitting that the 2020-21 season is even crazier. What’re your thoughts on this rumoured division set-up? Let me know on Twitter @tkdmaxbjj!