Jakub Lauko Is Ready For A Big Year In Providence 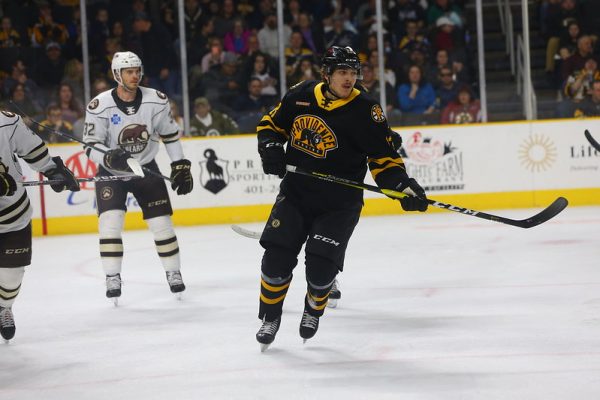 Jakub Lauko was drafted in the third round 77th overall in the 2018 NHL Draft. The young forward from the Czech Republic had a lot of excitement surrounding him coming into the 2019-2020 season. Lauko was coming off an excellent 2018-2019 in the QMJHL with the Rouyn-Noranda Huskies. In 44 games with the Huskies, he would net 21 goals while tallying 20 assists for 41 total points (stats courtesy of EliteProspects). Not only that, in 19 playoff games, he would net six goals while dishing out seven assists for 13 total points (stats courtesy of EliteProspects). That would help lead Rouyn-Noranda to not only a QMJHL Championship but also a CHL Memorial Cup. Lauko fully established himself as one of the top prospects in the Boston Bruins’ system.

Take a look at @jakub_lauko's first professional goal that tied the game for the #AHLBruins! pic.twitter.com/BFJ86SI35Q

After his coming out party in the QMJHL, the Bruins were excited to have Lauko in Providence for the 2019-2020 season. The young forward’s biggest asset is his speed. He can power past the defense creating scoring chances not only for himself but for his teammates as well. On top of that, he has excellent puck skills and great awareness on the ice. Despite all the buzz, his 2019-2020 campaign started slow. In his first 12 games, he would net three goals for just three total points (stats courtesy of the AHL). During his next six games, Lauko looked like he finally started getting comfortable. In those six games, he would net one goal and dish out four assists for five total points (stats courtesy of the AHL). However, in that last game, he would receive a brutal hit against the boards resulting in a concussion.

Jakub Lauko would recover from the concussion in time to play in the World Junior Championships. The young forward was excited to play in the tournament because it was being played in his home country, the Czech Republic. However, Lauko’s return to the ice was short-lived. In his first shift of the WJC, he would suffer a sprained MCL. The injury would sideline him until March. He would go on to play in four more games before the season was shut down, netting one goal in those games. Overall, Lauko would plan in 22 games for Providence, netting five goals while dishing out four assists for nine total points (stats courtesy of EliteProspects). Though the season didn’t go as planned, we have to remember injuries are unfortunately a part of hockey.

Jakub Lauko played only 22 games in his first #AHL season. He scored 4 goals and added 5 assists.#NHLBruins prospect missed more than two months of action due to a knee injury suffered in WJC opener.

Here are all 5 goals Lauko scored for @AHLBruins this season. pic.twitter.com/PA5YPBZ4Ew

Despite the injury-plagued 2019-2020 season, Lauko is gearing up for a big 2020-2021. The young forward is finally healthy. Instead of waiting around for the season to start, he’s currently playing for HC Energie Karlovy Vary of the Czech Extraliga, which is the Czech Republic’s highest hockey league. In seven games with HC Energie Karlovy Vary, he’s netted one goal while dishing out three assists for four total points (stats courtesy of EliteProspects). A combination of being healthy, and honing his skills in the Czech Republic before the season starts, is why I believe Lauko will take a big step forward for Providence in 2020-2021. Expect big things from the young forward. I hope everyone is staying healthy. Feel free to send me any comments or questions on Twitter. As always, GO, Bs, GO!