Victor Berglund Making The Most Of His Time In Sweden 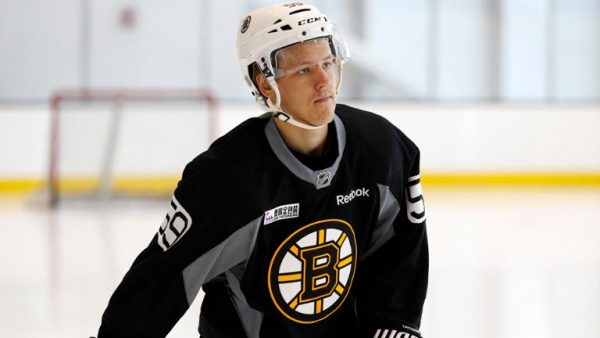 When talking about Boston Bruins prospects, Victor Berglund’s name doesn’t often come up. He’s a young defenseman from Sweden, who I think has a bright future ahead of him in the NHL. The Boston Bruins drafted Berglund in the seventh round (195th overall) of the 2017 NHL Draft. At that time, most clubs viewed him as an offensive-minded defenseman with strong skating ability. Now that you have a little background information on the young defenseman: let’s dive into why I think he should be a big part of Providence’s plans this season.

Berglund was playing for MODO Hockey of the HockeyAllsvenskan league in Sweden at the time of being drafted. HockeyAllsvensken is the second-highest league in Sweden.  Though he didn’t get a lot of minutes, the then 18-year-old played in 37 games for MODO Hockey; he would net one goal while dishing out six assists for seven total points (stats courtesy of EliteProspects). Though that may not seem like much, it’s impressive that he played in as many games as he did as a young kid playing in a league full of grown men.

The 2018-2019 season was much more fruitful for Berglund. He played in 50 games for MODO Hockey, netting four goals while tallying nine assists for 13 total points (stats courtesy of EliteProspects). The Bruins were so impressed with his play that he came over to play in four games with Providence at the end of the season. He would net one goal and dish out one assist for two total points in those four games (stats courtesy of EliteProspects).

Here’s Victor Berglund scoring his first career goal in his first ever game. He recognizes the space in front of him and receives a pass above the hashmarks. He then skates into it with his head up and lets one rip. Been saying it for a while, but the kid can shoot. #NHLBruins pic.twitter.com/IH5ZbmChec

The 2019-2020 season was a big one for Berglund. In 52 games with MODO Hockey, he would net 10 goals while dishing out 12 assists for 22 total points (stats courtesy of EliteProspects). The young defenseman did all of that despite low ice time. He was second on the team in defensemen points, first in goals, and first in shots (stats courtesy of EliteProspects). Being able to accomplish all of that at the young age of 20 was impressive. Berglund was able to showcase his full range of abilities during the season. He skates well, plays the puck, and facilitates chances for not only himself but his teammates as well. He also showed off his killer shot.

#NHLBruins prospect defenseman Victor Berglund notches his first goal in his first game of the 2020/21 #SHL season.
Big blast from the point.

Berglund is starting the 2020-2021 season on loan to Lulea HK of the Swedish Hockey League. The SHL is Sweden’s top league. The young defenseman is having a blistering start to the season. In 15 games with Lulea HK, he’s tallied two goals while dishing out nine assists for 11 total points ( stats courtesy of EliteProspects). Berglund is starting to blossom as a prospect. He’s showing off his skill and skating ability on a nightly basis. One major question remains for the native of Sweden. What happens the rest of this season? I believe when the AHL starts their season that the Bruins will bring Berglund over so that he can play in Providence. He’s proven without a doubt that he deserves a shot in the AHL.

In the end, I think Berglund will end up being a middle or a bottom-pairing defenseman in the NHL. Those types of players are essential to NHL rosters. Without them, teams falter when it matters most. I am excited to watch Victor Berglund continue to develop in the Boston Bruins’ system. He’s someone everyone should keep an eye on. I hope everyone is staying safe and has a wonderful holiday. Feel free to send me any comments or questions on Twitter. As always, GO, Bs, GO!