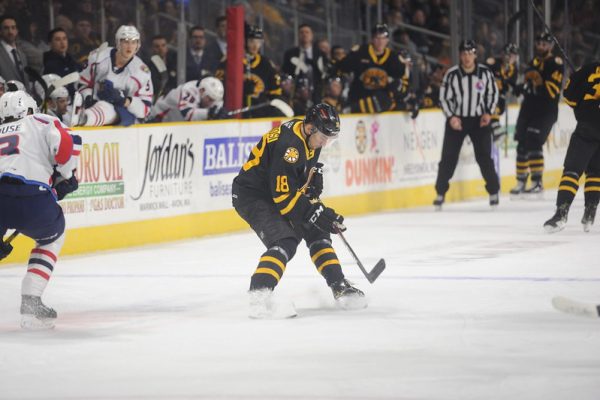 There’s a buzz in the air as the calendar turns to 2021. The excitement of a new season is upon us. There are many players and storylines that you could follow this season. One of the players I am excited about as the Bruins start their quest for Lord Stanley’s Cup is Robert Lantosi. The young forward is a lesser-known prospect from Slovakia. However, his name could slowly begin circulating in Boston. Let’s dive into the player’s history and see why.

Robert Lantosi By The Numbers

Robert Lantosi came to the Bruins after playing the 2018-2019 season in his home country Slovakia. He played for HK Nitra of Tipos Extraliga, which is the top league in Slovakia. In 56 games with HK Nitra, he netted 20 goals and tallied 38 assists for 58 total points (stats courtesy of EliteProspects). It was the young forward’s playmaking ability that led to the Bruins signing Lantosi. He has a ton of speed, and he creates a ton of scoring chances in the offensive zone.

Robert Lantosi came to the Providence Bruins after that excellent season with HK Nitra. The young forward’s rookie season in the AHL was an excellent one. From day one, his offensive skill was on display. He showed us all why the Bruins took a chance on him. In 50 games with Providence, he found the back of the net 11 times while tallying 20 assists for 31 total points (stats courtesy of EliteProspects). It was the type of season you’d want a rookie to have. The Boston Bruins were so impressed that they signed him to a two-way contract in August.

With the start of the season influx due to the global pandemic, Lantosi started 2020-2021 playing on loan for his old squad HK Nitra in Slovakia. The young forward picked up right where he left off. In 18 games with HK Nitra, he netted four goals while tallying 14 assists for 18 total points (stats courtesy of EliteProspects). It’s great to see that the young forward was still on his game before training camp started.

So, what’s next for the talented young forward? I believe Lantosi will probably end up playing the AHL at least to start this season. The AHL season opens up on February 5, 2021. The Providence Bruins will be playing their games in Marlborough, Massachusetts, at the New England Sports Center. Black N’ Gold’s very own Mark Allred had the inside scoop on this in December. Check it out here.

Even though I believe Lantosi starts the year with Providence in the AHL, that doesn’t mean I do not think he eventually gets called up. Whether it’s an injury call-up or general ineffectiveness of roster players in Boston, I think we could see a fair share of Lantosi. He’s not someone who’s going to be a superstar, but he could provide scoring depth on the bottom-six. That is especially important to Boston because, as we all know, Boston loves to use all of its lines. Robert Lantosi is someone that I am a major fan of, and he’s someone you should keep an eye on. I hope everyone is staying safe. Feel free to send me any comments or questions on Twitter. As always, GO, Bs, GO!