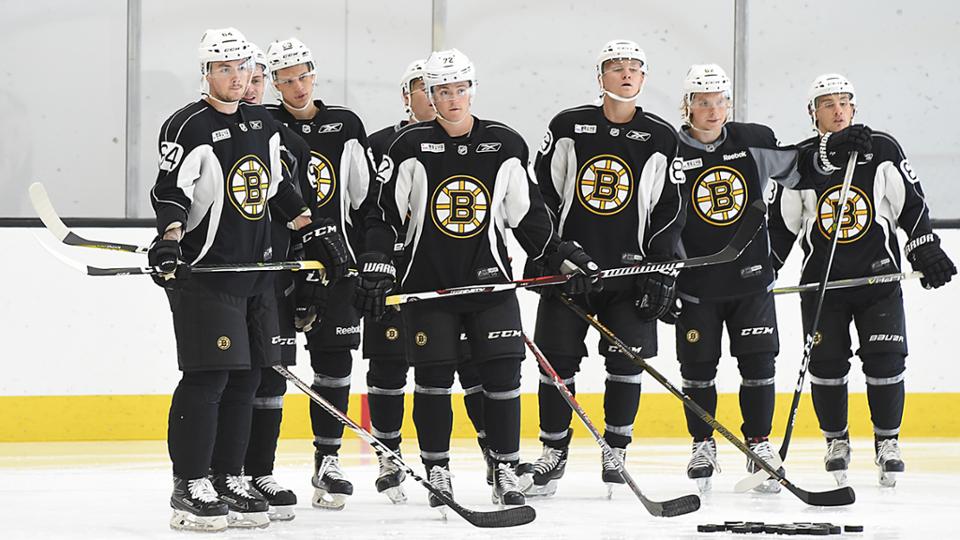 Back, and better than ever for Tier 3! This is Part 3 of an ongoing series discussing the Bruins’ prospects and their potential impact for Boston down the road. If you haven’t gotten a chance to read the preceding pieces, you can check Part 1 out here, and Part 2 out here. Enjoy!

DeBrusk was by no means dominant in his inaugural AHL season in 2016-17, but he was quite effective for a rookie in his first season of professional hockey. He isn’t going to wow you with one particular skill, but he is good at most everything. Need a guy to get in hard on the forecheck? Sure. Need a goal? He can do that. Sweet feeds? Absolutely. Strictly defensive zone work? He can do that too. DeBrusk still needs to feel more comfortable on an everyday basis, and his mind is sometimes a split-second behind the play. This is not necessarily a concern, as experience often will make that differential up down the road. Eventually, DeBrusk will be a good middle six winger who can rack up points or be a punishing two-way forward depending on the system and his linemates.

Trent Frederic was the bane of many B’s fans’ existence over the past year, a microcosm of what appeared to be a front office who had no clue how to A) be consistent with their philosophy or B) how to be competitive in today’s NHL. Keith Gretzky quite literally said in a post-draft interview that they didn’t believe Frederic would be a Top 6 player. Let me debunk this a bit. Frederic has the offensive ability to be proficient in a Top 6 role, but ideally, he is a really good 3rd line centerman. The issue with Frederic is his footspeed, which is certainly subpar at this juncture. Remember, this was the main criticism of Vancouver’s Bo Horvat, and he found a way to overcome that deficiency. Frederic is big, strong, physical, and willing to get his nose dirty at either end of the ice. Defensively, he is already brilliant, and he is able to make up for a portion of his lack of foot speed with his hockey IQ, anticipating where the puck will be next, and taking the most efficient route to it. He won’t wow you, but he isn’t the plug he has been made out to be.

Jesse Gabrielle is a prototypical Bruin if I have ever seen one. He has been a steady riser since his draft year and has begun to put it together offensively in the past 18 months. He already has the Mark Allred stamp of approval, which is key when evaluating any B’s prospect (seriously, Mark knows his stuff). He essentially is Brad Marchand before he became Brad Marchand. The Marchand who helped the B’s to the Stanley Cup in his rookie season playing everywhere in the lineup, primarily in a role with Shawn Thornton and Gregory Campbell, and back when he was consistently making boneheaded decisions and non-hockey plays, rather than just occasionally. Gabrielle has shown flashes of a similar scoring touch and has the agitation bit down to a science.

There’s a lot to like about the offensive game of Matt Grzelcyk. The former Boston University captain is about as dynamic as they come on the back end. He possesses a great first pass and silky hands. He is more quick than fast, but it gets the job done. Unfortunately, the comparison to Marc-Andre Bergeron drawn for a reason. For all of his offensive brilliance, Grzelcyk has a tendency to be absolutely dreadful in his own zone. Now, this is not necessarily a needed skill for a modern defenseman, just not one for anybody playing more than a bottom pairing role. Look for him to dominate for a full year in Providence before joining the B’s in 2018-19.

Heinen surprised many when he broke training camp this past season, but it became quite clear that he should have remained at Denver considerably longer. Much like Sam Bennett going into the 2014 Draft (hmmm, similarities abound?), Heinen can be a dynamic playmaker but has a tendency to disappear from time to time. He needs to continue to get stronger to become a permanent fixture in the NHL lineup, and improve his overall footspeed, as he falls more to the side of quick than actually fast. The upside is there, but he needs to figure out how to unlock it on a consistent basis.

( Above Photo Credit:   The Boston Globe )

Vaakanainen is the definition of a “safe” pick. He is smooth through the transition, physically capable of playing in a men’s league at a young age, and makes intelligent decisions with the puck. Unfortunately, there appears to be a minimal offensive upside, which limits his potential impact at the NHL level. As frustrating as that is to B’s fans, a poor mans’ Marc-Edouard Vlasic isn’t necessarily a bad thing. If anything, he is the type of defenseman some teams (Edmonton…) seem to covet, so he provides value in multiple areas.

( Above Photo Credit:  The Boston Herald )

Jakub Zboril may be the single most frustrating prospect in the B’s system. There are two distinctly different versions of Zboril that can exist at any single time. There is the smooth skating, big hitting, tough defenseman who can quarterback a power play effectively, and get the puck up the ice quickly and efficiently. However, there is also the frustratingly disconnected defenseman who makes easy mental errors consistently, gives up on a play if he makes a mistake, and throws a hissy fit when he doesn’t get his way. If that side of him can be brought under any semblance of control, there is an effective middle pair defenseman here. Otherwise, Boston would be wise to get out from under Zboril as soon as they can.

Rather than analyze all three goalie prospects individually, I made the decision to consolidate them. Generally speaking, this is because they all appear to provide a similar level of upside at the NHL level at this time. Subban tends to get the worst rap, but that is more circumstantial – he is a former 1st Round Pick, whereas Vladar and McIntyre arrived later in their respective drafts. He also has had to deal with more freak injuries than the other two (i.e., fractured larynx) which would derail the development of any prospect. None of the three seem to possess elite, game-breaking potential between the pipes at this time, but could all be reasonably capable backups in the future.

All Statistics courtesy of EliteProspects.com