Blues Schenn Will Not Face Discipline After Hit On Bruins Krejci 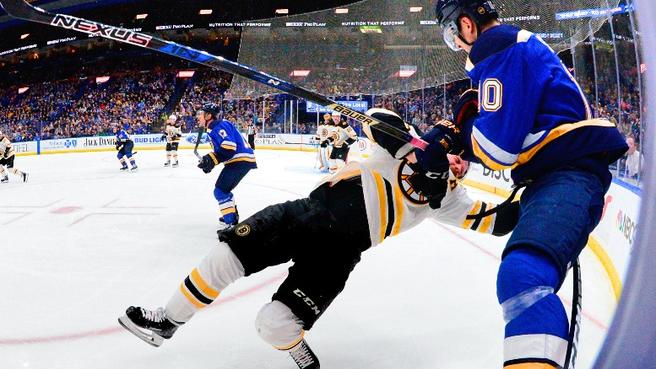 On Thursday, the NHL Department of Player Safety announced there will be no further discipline for Brayden Schenn after he hit David Krejci in the head on Wednesday night.

Schenn was called for charging and given a two-minute minor in the second period during St. Louis’s 2-1 overtime win over the Bruins.

Brayden Schenn catches David Krejci with a hit to the head pic.twitter.com/GtCEtQm29t

The Department of Player Safety claims there was no charging on the initial play because Schenn still had his skates on the ice once contact with Krejci was made. They also said the head was unavoidable on the play.

Thankfully, Krejci was uninjured after he took the hit and remained in the game, but the inconsistency of the Department of Player Safety continues.

Earlier this month, Boston’s David Backes, who had never been suspended in his 12-year career, was handed a three-game suspension for a very similar hit to head of Detroit’s Frans Nielsen.

Backes also received a match penalty and was ejected from that game.

David Backes just got a match penalty for a hit from behind on this hit.

Yes, hit from behind. pic.twitter.com/zlrKRehFvJ