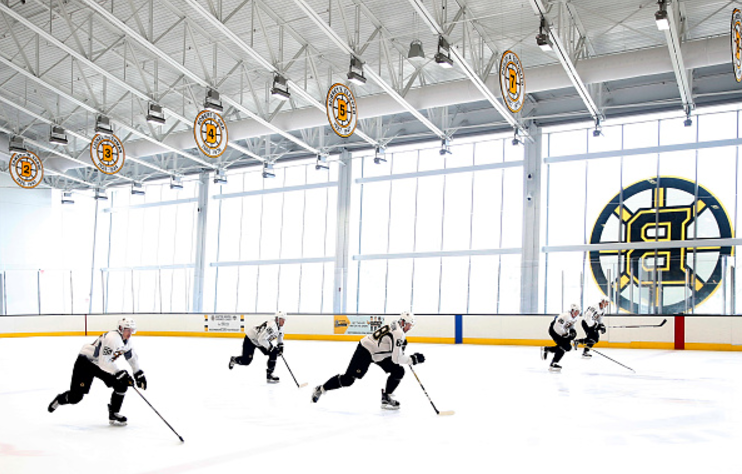 In the calendar year, March typically signals the arrival of spring, March Madness, and most importantly, Canadian Major Junior and NCAA playoffs. Teams that have battled hard since October have their chance at immortality with names engraved on a championship trophy. Teams that do not qualify for playoff contention fade into their offseason.
As teams meet with elimination, draft prospects will occasionally depart their amateur, developmental teams for a spot in the Show, or with an NHL-affiliated farm team; more often than not, with the AHL. March 11th, 2018 was the first signing of Boston Bruins prospects out of their stockpile in the developmental leagues. Trent Frederic and Cameron Hughes turned pro after the Wisconsin Badgers season ended in Ann Arbor, MI, to Michigan State.
While Joona Koppanen was signed a year ago, on April 13, 2017, he played the first part of his new contract with his Liiga team (top Finnish league). While not a recent signing, nor amateur prospect, he is a newcomer to the “WannaBs” in Providence. More on him later.
Next, on March 20th, QMJHL St Johns Sea Dog Cedric Pare joined the Providence Bruins on an ATO, much the same as aforementioned Frederic and Hughes. The Patrice Bergeron doppelganger posted a remarkable standout season for the Sea Dogs, with 13G, 24A–37 points. The year before, he tallied only 5G, 11A—16 points. By signing an ATO, the kids are able to return to developmental leagues should their trial period reveal they need more seasoning.
Last but certainly not least is 6ft 7in Wiley Sherman. The Crimson blueliner is the only prospect mentioned drafted in the Peter Chiarelli era and is a senior at Harvard University. Much like former Bruins prospect Rob O’Gara, Sherman opted to finish his collegiate career before turning pro.

Let’s introduce you to each one in a bit more detail: 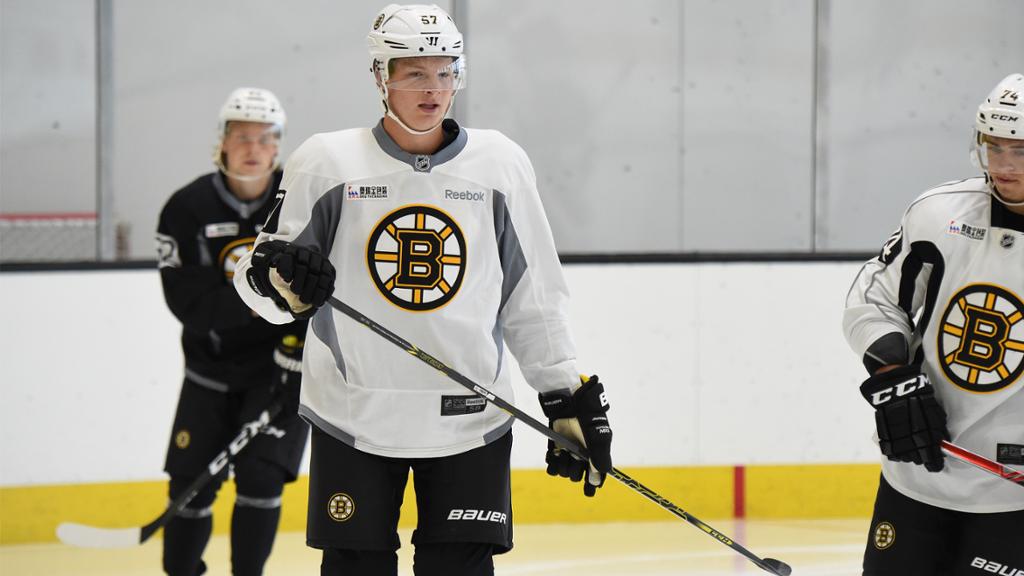 Trent Frederic needs no introduction. The 2016 1st round selection exploded onto the U20 WJC stage with 5 tallies for the USA team that eventually won the Bronze medal, securing the USA squad 3 consecutive medals in 3 consecutive WJC’s for the first time in history. His shot and release are first-rate, while size and strength down the middle make him an effective pivot.
Frederic was also the subject of some unwarranted controversy revolving around former Bruins director of amateur scouting Keith Gretzky. “[Frederic] is not going to be a top-two-line guy, we know that” was the quote that sparked Frederic to prove his critics wrong. Ranked outside of the top 50 players by most scouts, Frederic went on to have back to back 30 point seasons with the University of Wisconsin Badgers. In his second season, Frederic’s leadership earned him an “A” on his sweater. His quotes following the draft and Gretzky’s comments hint that he’s a prospect wise beyond his years: “I’m just kind of excited to be on the team,” he said. “It doesn’t really matter where you get picked. It’s just what you do from there.” “I guess I’ve got a little pressure [as a first-round pick], but I think I like that. So it makes me push myself harder. So it’s good.” 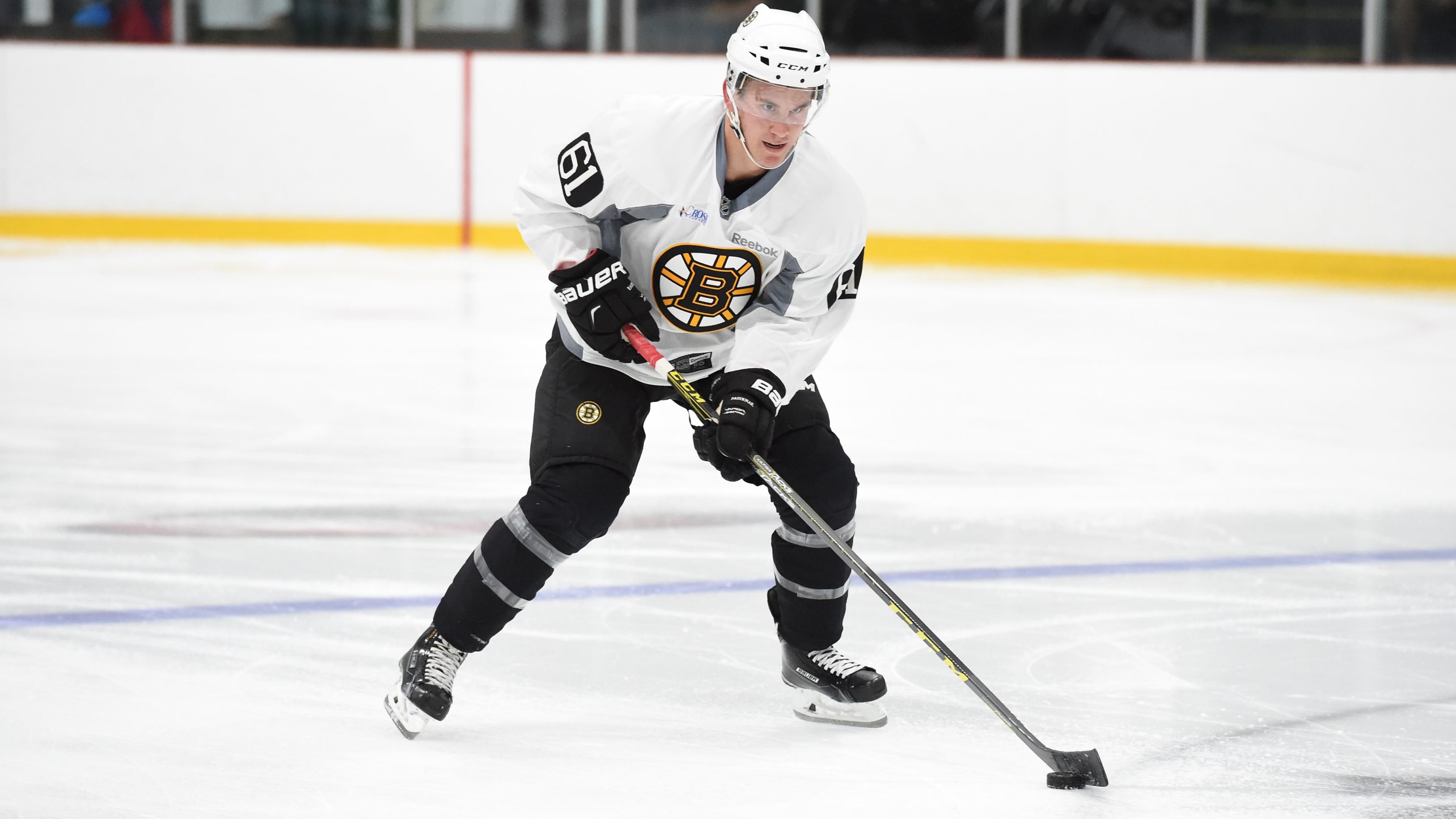 Cameron Hughes has the distinction of being the only draft selection already attending college when his name was called. The 2015 6th round selection has flown under the radar of most Bruins fans since the selection (development camps notwithstanding). 6’- 0”, 183lb Hughes most recently wore the “C” on his sweater for the 2017-2018 Badger campaign and has recorded 13pt, 25pt, 32pt, and 22pt seasons for Wisconsin beginning with his freshman year. He is described as a “skilled pivot with soft hands.” “Hughes needs to take a step forward with both his offensive output and his defensive play before he’ll get a look at the NHL level.”[3] As of today, Hughes has already contributed an assist at the professional level, during a 4-1 thumping of the Bridgeport Sound Tigers on March 18th, 2017. 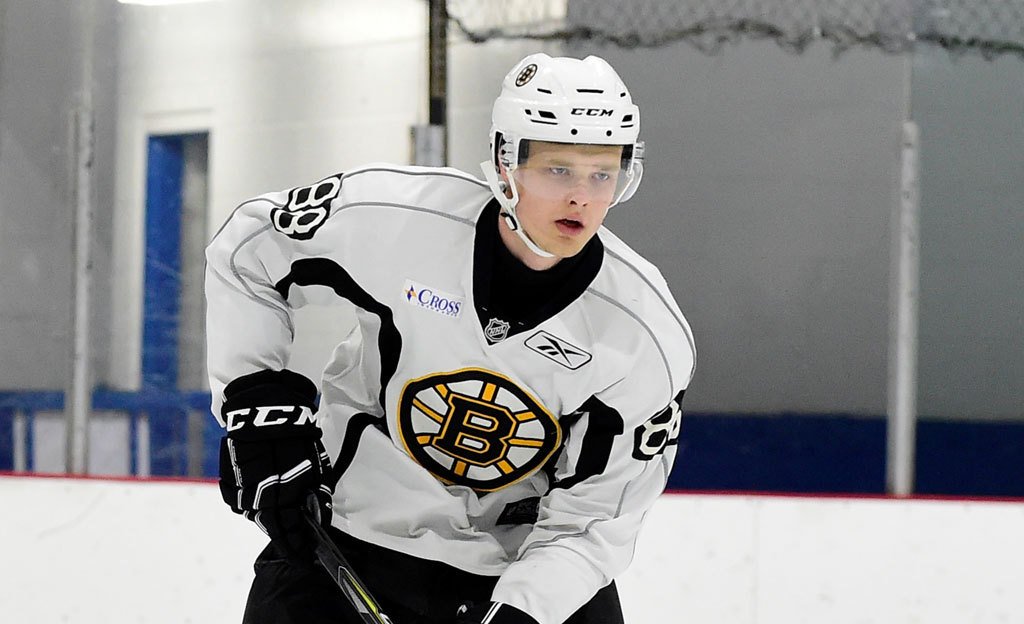 Originally signed in 2017, the Finnish pivot spent the first part of his 3-year ELC with the Tampereen Ilves of the Finnish Liiga. Koppanen is tall, and somewhat lanky, standing 6’-5”, and 192lb. He was drafted in 2016, 6th round (135th overall) by the Bruins from the Jr. A SM-liiga, the top Finnish junior league. Koppanen also appeared in the same WJC tournament Frederic appeared in, where Joona contributed with 3G, 1A. His point production over the past 3 years has been slightly varied, with 57 in 2014-2015, and then 26, 54, and 14 in each of the following years respectively. Eliteprospects has him listed as “on loan” to the AHL, so his appearance in Providence might be a trial run for next year.[4]
Koppanen has the size to be an effective pivot and will gain the strength over time. His 2016-2017 campaign impressed, with a 1.42 points per game pace, and a final total of 57 in 38 games. His reach and defensive prowess are his strengths. However, he only has an “average” shot.[5] He has the reach and hockey IQ to make a solid role-playing NHL depth forward, but while his development league numbers were impressive, once he made it to the Finnish “major” leagues, his point production dipped. Like his upside, but I’m guardedly optimistic about his future.

The lone representative from the Canadian Major Junior league (CHL), Pare must have been inspired after the Bruins selected him in the 6th round of the 2017 draft (163rd overall). After a pedestrian 5G, 11A season in the QMJHL 2016-2017, Pare more than doubled up both columns to the tune of 13G, 24A in 2017-2018. The Bruins love their big, strong-bodied centers, and French-Canadian Pare is no exception at 6’-3”, 205lb. In a continuation of a theme, the 19-year-old was signed first to an ATO, with his ELC kicking in next year. I’m excepting to see him in the Providence lineup in the remaining weekends this season.
Pare has excellent reach, and coupled with a strong frame, has been extremely effective at the dot for his QMJHL club. In his draft and draft+1 year, his faceoff% was over 50% consistently. The Bruins Brass acknowledged he is a “project” especially in the skating department, but at least till now, his excellent vision and play away from the puck has more than made up for it. He could shape into an energy or role-playing forward or more, depending on his developmental trajectory. 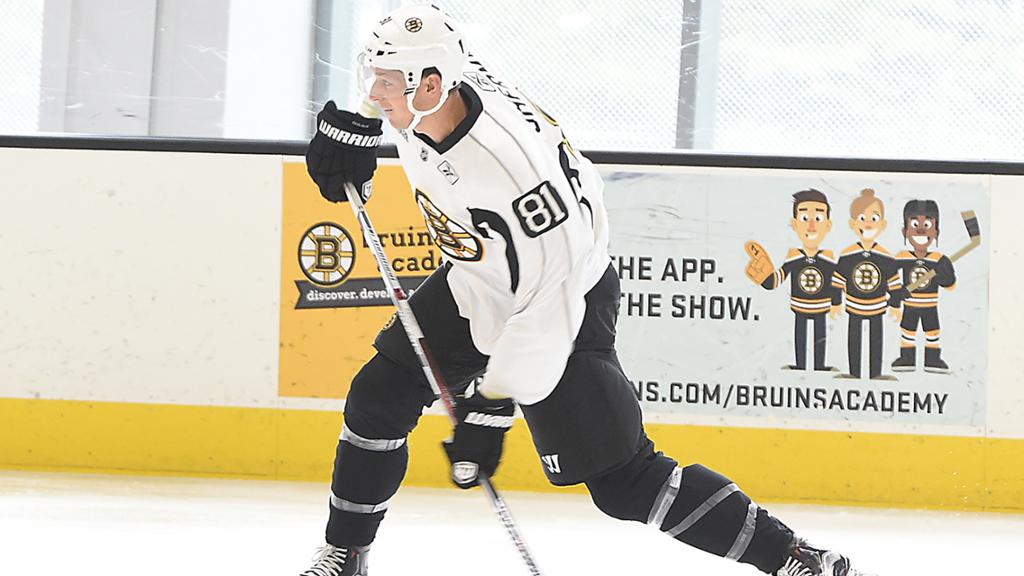 Playing alongside 2014 draft pick Ryan Donato, 6′-7” Wiley Sherman is set to graduate from Harvard and to the world of professional hockey. Sherman is the only prospect on this list from the Peter Chiarelli era, drafted in 2013 5th round (150th overall). Both he and Donato have won the NCAA NCAC championship twice: 2014/15 and 2016/17 respectively. If you’ve attended any of the development camps over the past 4 years, Sherman has been impossible to miss with his incredible size, and the best reach out of the newcomers to Providence. His point totals while at Harvard are low, but Sherman plays a shutdown defensive-defenseman role that doesn’t lend itself to showing up on the score sheet. His skating is fluid and effective for a 6’-7” beast, and with his huge wingspan, can gap opponents very well. Sherman is by no means a flashy player, but more of a blue-collar workman.