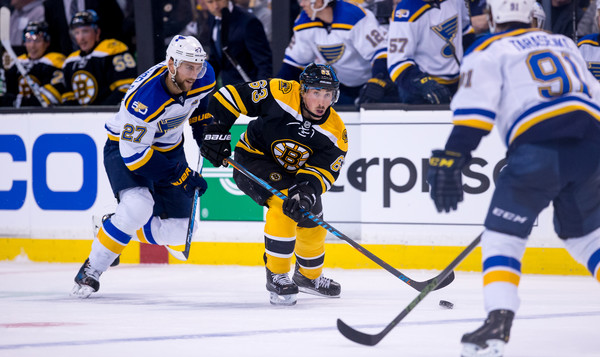 Paul Postma steps in for Torey Krug on the back end. #NHLBruins pic.twitter.com/o7Vuz9TtME

Torey Krug steps out of the lineup tonight after a very physically demanding game for him on Monday, leaving players like Miller and Carlo to anchor the defense tonight. Jordan Szwarz comes into the lineup along with Paul Postma. Anton Khudobin heads into the goal countering Jake Allen at the other end.

Nick Holden/Brandon Carlo is written as the first pairing, but I’d be cautious to not let them play all the big minutes when you have a solid pair of Grzelcyk and Miller waiting on the bench. David Krejci will be the center for two rookies tonight, something that has worked in the past with DeBrusk, but with two it may be a different story.

Krejci woke everyone up a minute and a half into the game as he rang the outside post with his shot after some simple, yet effective, moves. Boston would play the majority of the first five minutes in the Blues’ zone because of their ability to cycle the puck and keep possession of the puck. The Bruins headed to the power play after a textbook crosscheck from Todd Bortuzzo that was pretty dangerous. Boston went right to work, but were slowed down when a pileup of players pinned the puck along the boards, which killed off some extra time but when St. Louis was trying to clear it, the puck went off of a referee’s skate and into the slot, where the Boy Wonder Ryan Donato was powering into where he took a one-timer that beat Jake Allen. The B’s continued to keep up the aggressive pressure in the offensive end. Anton Khudobin looked very shaky in nets but he was able to stay in position and keep the puck out of the net. With 00.4 seconds left in the period, some extracurricular activities started after a big hit from Shosnikov on Riley Nash. Boston would head into the dressing room with a one-goal lead.

The teams started off 4-on-4 after the two minor penalties from the first period. This would result in a lot of odd-man chances for the Blues, but Khudobin continued to stand strong. Boston had some trouble entering the zone when they didn’t have the numbers advantage early on but adjusted on the fly. Anton Khudobin continued to make clutch saves that kept the Bruins in the game. David Krejci was hit directly in the head as he came up the boards with the puck. This would result in only two minutes, which the Bruins players didn’t like. As the Bruins started to set up in the Blues’ zone, Danton Heinen was assessed a minor penalty for a one-handed slash which brought the game to 4-on-4. The teams would continue to get chances at both ends, but St. Louis got more of them in the last few minutes, making Khudobin work extra hard in net. Boston would hold onto their first-period lead going into the third period.

Boston continued to have issues breaking through the St. Louis’ defencemen but would still try and try again until they could find a lane. Anton Khudobin continued to bail out the Bruins’ defensive play. The St. Louis defense did a great job of holding their offensive line and extending plays and getting pucks on net. Boston’s bad defensive play would eventually catch up to them when they let Jaden Schwartz walk in over their blue line and wire a shot that finally beat Khudobin. St. Louis would then take the momentum that they had from the goal and channel it into offensive pressure. But once again, Anton Khudobin stepped up and made the plays he needed to put the Bruins in a position to win the game. Boston would get some decent chances at the other end, but couldn’t get another one past Allen. In the dying seconds of the third period, the Bruins started to scramble in their own end, leading to a diving back-handed shot on net that Khudobin dove to get as he was sitting on the ice and knocked it away from the open net. And for the second year in a row, the Boston Bruins are headed to the Stanley Cup Playoffs because of the point they were guaranteed from going to OT.

The Blues didn’t want this going too long. It only took 30 seconds for Jaden Schwartz to score his second of the night on a simple wirst shot. But on the bright side, both teams got what they needed for playoff implications.

The last two games have been the Bruins toughest in terms of injuries. Tonight especially.

To get a point with the backup goalie in net is pretty impressive pic.twitter.com/MR9tHbNVfl

While injuries are common to all team in the NHL, the Bruins seem to be dealing with far too many, even for a team that plays the fast-paced, hard-hitting style they do. Tonight was statistically the hardest game for them with injury losses. If the Bruins want a shot at the top spot in the East and potentially the NHL, they’ll need to get healthy. And quickly.

1st: Ryan Donato – After his incredible first game, Donato was bound to have an average game. And while he did play average, he also scored the Bruins only goal of the game after he made a heads-up play to follow the puck instead of heading to the place everyone else was looking. He was also one of the two players to get a point tonight (Pastrnak was the only assist on the goal). He has a bright future on this team as long as they don’t overplay him.

2nd: Anton Khudobin – The Bruins clinched tonight because of Khudobin. And while both goals he gave up weren’t the best shots ever, he kept them in the game all night. Specifically, in the dying seconds when he threw what parts of his body he could in front of the sprawling emptiness of the net to keep the Blues from scoring.

3rd: Kevan Miller – Miller was given the task of stepping up to replace players like Krug, Chara, and McAvoy, and he did a pretty solid job. He played 24:17 tonight, the second most on the team only behind Nick Holden. While he didn’t make it on the scoresheet, he did leave an impression on the St. Louis players. He was physical as he usually is and created offense with his skating. A very under-rated part of the core defencemen.

MUP (Most Under-Appreciated Player): Sean Kuraly – Every time I saw him in the offensive zone, he was mucking it up in the corners or battling in front of the net. This is the kind of guy that you want on your team, and the Bruins are lucky to have him.

ON A SCHOOL NIGHT #NHLBruins

Kuraly's energy could power a nuclear sub. Be it American or Russian.

"THEY HAVE NONE OF THEIR FIRST PAIRING, THEIR POINT GETTING DEFENDER, AND THEY DON'T HAVE THEIR BEST PLAYER. HOW IS THIS HAPPENING!?" – Me, more than pleasantly surprised and excited.

Also Mike Yeo, screaming to the heavens in the Blues locker room in a fugue state.

So does David Krejci have to leave the game for @NHLPlayerSafety to look at this Schenn hit? That’s what it feels like…because if David “zero prior reputation” Backes got 3 games this HAS to be something

The Bruins are a better team when they aren’t missing like eight of their best players IMO.

The Boston Bruins are missing the following tonight… #NHLBruins

Boston’s journey to the #StanleyCup begins. The @NHLBruins are officially in! pic.twitter.com/qyqvnMDCL2

Friday, March 23rd, in Boston vs the Stars