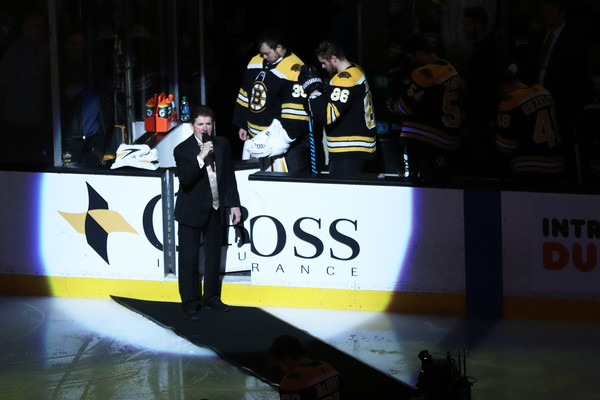 Rene Rancourt sings the national anthem before the game between the Boston Bruins and the Florida Panthers at TD Garden on April 8, 2018, in Boston, Massachusetts.
(April 7, 2018 – Source: Maddie Meyer/Getty Images North America)

If you’ve ever been to the TD Garden for a Boston Bruins home game, you’ve heard his voice. Over the last 42 years, he’s been the artist who has sung the ‘Star Spangled Banner’ and ‘O, Canada’  before the start of a Bruins match. On Sunday night, Rene Rancourt sang his final regular season rendition of the American national anthem.

Love him or hate him, he was the voice of the Bruins for decades. Rancourt’s voice either raptured or repelled. The mid-anthem grumbling became one of the things you got used to hearing from fans as Rancourt belted out the American and Canadian anthems.

Rancourt was also accorded the honor of dropping the ceremonial puck before the start of the game. Sadly, the Boston Bruins couldn’t send Rancourt out on a high note. The Florida Panthers beat the Bruins 4-2 in the B’s final game of the 2017-18 season.

Standing O for an emotional Rene Rancourt as the Garden sends him off to retirement #Legend pic.twitter.com/0JzCFLzIEc

The 78-year old Rancourt will continue to sing the ‘Star Spangled Banner’ and ‘O, Canada’ during the playoffs. So, at the very least, Bruins faithful will get to hear him sing two more times before he officially packs it in at the TD Garden.

Rancourt was a TD Garden legend. The Bruins organization will be hard pressed to find anyone who can fill the room with his level of charisma. So, Godspeed Rene, you gave three generations of Bruins fans incredible memories.