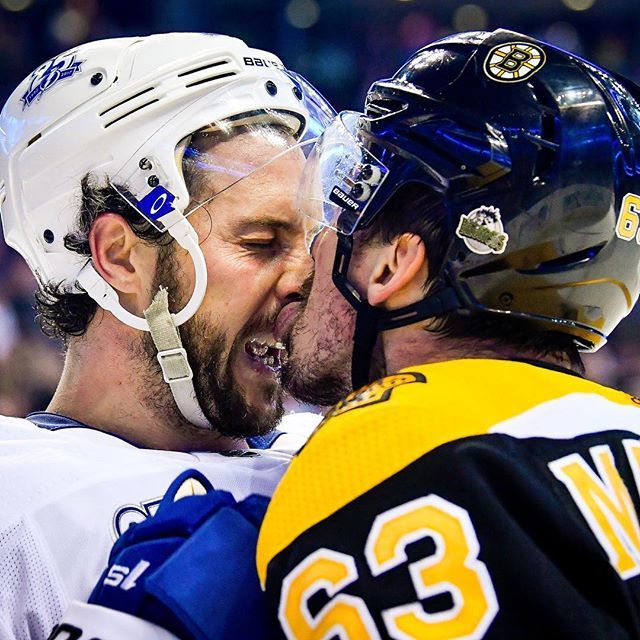 Game 4 between the Boston Bruins and the Tampa Bay Lightning on May 4th, 2018 was an interesting contest, to say the least.

Despite the game being won in overtime, the most memorable moments by a long shot were Brad Marchand’s lick on Ryan Callahan after Marchand stopped the Lightning forward right in his tracks with a textbook hip-check and the missed call that led to the tying goal in the 3rd period.

The lick in question:

An interesting moment, and the second time that Marchand has done this during the 2018 Stanley Cup Playoffs as he also licked the Toronto Maple Leafs’ Leo Komarov in game 1 of the opening round. This continued habit has led to an uproar on social media as well as among players, coaches and league officials, with many calling for the NHL to put an end to Marchand’s licking days.

They asked, and they received, as the league has officially told both Marchand and Bruins GM Don Sweeney that any further licking will result in punishment on the ice and likely off it too. Maybe these antics don’t have a place in the sport of hockey, maybe they are an embarrassment, or maybe they aren’t, and Marchand has figured out the most effective way to get under his opponent’s skin.

Regardless, it is ridiculous that these antics are getting all the attention around the league while the terrible, inconsistent officiating throughout each and every playoff series is being swept under the rug.

As previously mentioned, Steven Stamkos’ game-tying goal in game 4 would have been waved off it wasn’t for this missed call on Nikita Kucherov taking down Charlie McAvoy:

Lightning get away with a hold, Stamkos ties the game pic.twitter.com/VCrepEpP11

This is just one example of many calls that were missed or incorrectly made in not only this game but throughout the entire series. Another example from last night’s game 4:

It is blatantly obvious that there is a stark lack of consistency among the officiating in the Stanley Cup Playoffs. The focus must remain consistent, and the thresholds of different calls such as hooking, holding, slashing and tripping that are established must remain in place for the entirety of a game and series. Marchand may need to be reprimanded as that is the consensus around the league, but the officials must be held accountable for mistakes such as these. Bad calls happen, and typically over a 60-minute hockey game or a best-of-7 series they even out and the better team wins, that is part of hockey. It becomes a problem when the officials make calls that directly influence and change the outcome of a game. If Stamkos’ goal had been waved off due to Kucherov’s hold on McAvoy, the Bruins would have retained their 3-2 lead and likely held on or extended it to win game 4 and tie the series at 2 games apiece.

Have the referees this postseason just been plain terrible and made a numerous amount of egregious mistakes? Or is there some bias towards certain teams and players?

Regardless of the answer, many have called for the coach’s challenge to be expanded to allow coaches to challenge a scoring play where there may have been a penalty call that was missed such as was the case on Stamkos’ goal.

One way or another, the NHL and its officials need to focus more heavily on how games are being called than on whether or not a player is using unorthodox methods to get under his opponent’s skin.