Bruins Will Have Plenty Of Lineup Battles Heading Into Next Season 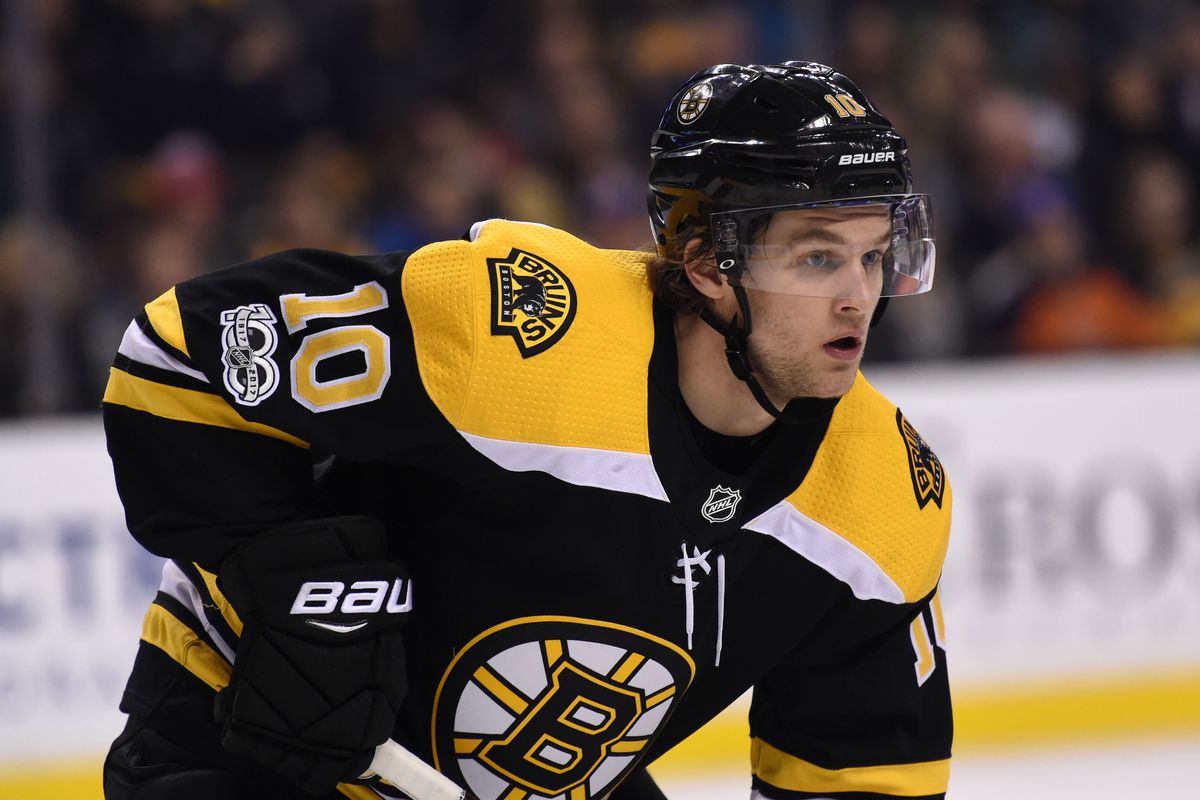 With free agency and the 2018 NHL Draft looming, an interesting storyline to follow will be the roster battles that will unfold over the summer and into the 2018-2019 season. There will be numerous young players involved in these battles. To preface, I want to say that I don’t think any AHL defensemen or defensive prospects playing otherwise will crack the NHL roster out of camp, but instead will make things interesting as their season’s progress.

Anders Bjork has a fair amount of NHL experience and had parts of his rookie season cut short due to concussion and shoulder problems. Even though he was a late-round pick, Bjork caught the attention of many with his success at the University of Notre Dame that led to him becoming a Hobey Baker finalist in his senior season.

Bjork’s eventual return to the lineup will have an impact on whether Rick Nash is brought back in free agency. In the eyes of many, including myself, it makes more sense to commit ELC money to Anders Bjork’s top-six role, versus signing Rick Nash for a decent chunk of money.

Despite missing the playoffs as a whole and a good chunk of the regular season, Anders Bjork showed flashes of NHL readiness and top-six winger capabilities. In 30 games, he scored four goals and added eight assists, good for 12 points. He could play with Patrice Bergeron and Brad Marchand, as he did a bit last season, or with Jake DeBrusk and David Krejci. If he can stay healthy, the 2018-2019 season could prove fruitful for Anders Bjork’s growth as an NHLer.

Austin Czarnik is a player that I recently wrote about as possibly being a trade chip in the future. If he is re-signed, he will surely be in the mix for an NHL roster spot based on his success as a bottom-six Bruins forward in the past, as well as his success as a top scorer in the AHL.

The caveat with Czarnik is the fact that if he plays one more NHL game, he is eligible for waivers. If waivers become an option, the Bruins could risk losing him for nothing. There is a spot for him on the third line if Riley Nash is not re-signed, a position in which he has previously held. Otherwise, he could find himself in the AHL again unless he decides to sign elsewhere as a group-6 UFA. Jakob Forsbacka-Karlsson, Trent Frederic, and Jack Studnicka are three other players that will be battling for that third-line center spot if Riley Nash signs elsewhere in free agency.

Peter Cehlarik is another player that I recently wrote about as possibly being a trade chip in the future. Cehlarik has proven to some degree that he can be a capable top-9 NHL winger on either side.

Injuries and the presence of players with similar playing style and ages have hindered his progress towards full-time NHL duty. For reasons previously stated, he could be forced back to the AHL, or traded to what could be many teams looking for young, hungry wingers, with NHL capabilities and two-way ability.

Known mainly for his tools as a bottom-six forward, Anton Blidh could fight for a fourth line spot on the Bruins. If Tim Schaller were to go elsewhere in free agency, a golden opportunity could arise for Blidh.

Having 20 games of NHL experience certainly won’t hurt Blidh’s case on top of his effectiveness as a Providence Bruin in the physical, gritty game. This past season he posted career high’s in goals (11), assists (15), and points (26). Things are on the upswing in Anton Blidh’s brief professional career thus far, will a full-time NHL role be next? It surely could be if he comes out and proves himself worthy of such a role.

The @AHLBruins control the puck right off the face-off and Ryan Fitzgerald scores the OT winner! #PROvsRCH pic.twitter.com/vyUyvFpzb1

At 23-years-old, just months older than Anton Blidh, Ryan Fitzgerald finds himself in a bit of a conundrum. After impressing towards the second half of his first AHL season, Fitzgerald found himself promoted to Providence’s top-six forward core, making impressive progress. Reaching 21 goals and adding 16 assists, good for 37 points in your first professional season won’t go unnoticed.

The ideal spot for Fitzgerald’s continued growth as an NHL hopeful comes at the fourth line left-wing position with the possibility of Tim Schaller going elsewhere in free agency. That spot would be perfect for a player with a playing style reminiscent of Brad Marchand like Ryan Fitzgerald. The two are very similar players. His speed and willingness to get to the dirty areas will fit on the third line alongside speedster Sean Kuraly and a buzzsaw on his opposite wing in Noel Acciari. If a spot becomes available on the fourth line, watch out for Ryan Fitzgerald.

Speaking of Noel Acciari, Jordan Szwarz could be one eyeing that fourth line right-wing position. Szwarz was re-signed late in the regular season by Don Sweeney for another year and for a good reason. The guy has come alive since joining the Bruins’ organization. He built on a successful year one, coupled with brief NHL time with another great AHL season this year putting together a 21-27-48 stat line in 52 games. His positional versatility as a right-wing and a center makes him an asset. Jordan Szwarz is definitely another player to watch out for within these upcoming roster battles.

The CHL/NHL players agreement states that players under the age of 20 either have to make the NHL team or be returned to their junior team. These players are not eligible for the AHL. That is the predicament Jack Studnicka finds himself in heading into this upcoming season. It’s Boston or Oshawa for the Canadian kid.

If Studnicka does end up in Oshawa again, he will wear the “C” on his sweater for a second straight season. Last season, he averaged over a point per game with a 22-50-72 stat line in 66 games. His skating ability, competitiveness, and playmaking capabilities have led some to wonder if he can earn a roster spot out of camp. He has undoubtedly given those people a reason to feel as confident as they do about him. That third line center spot is up for the taking if Riley Nash is not re-signed.

Oh, look, another young player fighting for the third line center spot. JFK will look to build on his one game of NHL experience in a top-nine role.

Being a player with plenty of roster competition for ice time, JFK will have to build on his growth in Providence this year and give the coaching staff a good reason to keep him around for regular NHL duty or to send him down for more AHL seasoning. He had an excellent first season as a Providence Bruin this past year, tallying 15 goals and 17 assists equalling 32 points in 58 games. If JFK does secure a roster spot, the process to get it surely won’t be an easy one.

.@NHLBruins 2016 first-rounder Trent Frederic notched his first goal as a pro with the @AHLBruins, who hold a 4-3 lead in the third period. #LVvsPRO pic.twitter.com/UtxvW8eKgs

The one first-rounder in this group, Trent Frederic. After seeing some brief AHL action once his sophomore season at the University of Wisconsin concluded, Frederic has seen a small sample of professional hockey. Some, including myself, believe he is NHL ready, but, being NHL ready doesn’t guarantee NHL ice time from the start.

One thing that sticks out is his poise with and without the puck on his stick. If he can translate that to the pros, his transition will be seamless. But, it’s not that easy. Although high draft picks are excited, and many want to see them perform from the beginning, AHL time can be of great benefit, just ask Jake DeBrusk, Matt Grzelcyk, and Danton Heinen – just to name a few. Frederic’s hockey IQ, wicked shot, and poise are three things, in particular, that suit him very well for NHL duty. When we actually see him in the NHL is another story.

Stats, accolades, draft position aside, what matters most is showing up to camp ready to go as the regular season approaches. Whoever impresses the most increases their likelihood of earning consistent NHL ice time. Whether it is a full-time gig or a gig as the 13th forward, no one will just cruise into NHL duty with ease.