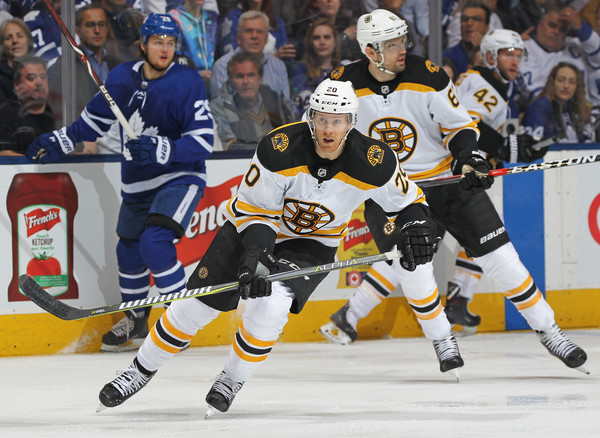 Riley Nash #20 of the Boston Bruins skates against the Toronto Maple Leafs in Game Six of the Eastern Conference First Round in the 2018 Stanley Cup Play-offs at the Air Canada Centre on April 23, 2018, in Toronto, Ontario, Canada. The Maple Leafs defeated the Bruins 3-1.(Photo by Claus Andersen/Getty Images)
(April 22, 2018 – Source: Claus Andersen/Getty Images North America)

With just over a month before the start of free agency, the Boston Bruins are going to have some tough choices to make on which of their free agents will be staying with the team next season. Among the UFAs the B’s will have to make a decision on are the two players with the last name Nash.

Riley Nash had a solid year as a three-zone, two-way center. With a 41 point (15 goals) season, he put up the best stats of his career while wearing the spoked ‘B’. He even held his own as the B’s top-line center while Patrice Bergeron was dealing with an injury.

So much for giving up Ryan Spooner, who finally seemed to have found a solid and steady stride with the Black and Gold (not to mention a first-round pick in 2018).  The losses sustained by the B’s organization weren’t worth the three goals put up in 12 games by the 33-year old Nash.

“I’ve been around for a while, so winning is going to be one of my top priorities,” said Nash. “If they see a fit here, then I’ve truly enjoyed my two years here, it’s been awesome and I’d love to come back. I think they have one of the best teams coming up with the young players and the veteran leaders, so this has been a good fit for the last two years. We’ll see if we can figure something out.”

Rick Nash would also enjoy playing another season with the Black and Gold.

“The organization was great,” offered Rick Nash on his hopes of coming back to Boston. “The guys were awesome…So, it was a great chapter here and hopefully, it can continue.

“I would love to [return], for sure. They’ve got a special group here and a lot of talent. It’s a great place to play.”

So, what are the odds that one or both Nashes remain in Boston?

“Obviously, our team accomplished a lot to get to the 112-point level. Ideally, you’d like to bring everybody back and think you take another run at it. I don’t think that’s realistic in a cap environment,” said Sweeney on the B’s current roster. “We can afford the salaries they’re currently at, but some of the guys had very good years and you expect that to change. I’ve had discussions periodically with some of those players and will have with their representatives going forward in the next month or so.

“It’s unfortunate that [Nash] got banged up near the end of the season there, and it really took him a while to get back. I don’t think he was himself. He said that during the exit meetings that he wasn’t quite himself. It’s disappointing because we felt we had a guy that was really going to help our secondary scoring and that line and help David [Krejci] get going in some offensive situations,” said Bruins team president Cam Neely at the end of the season press conference.

“You could see the big body and how he protects the puck, and how good he is in the corners and along the walls. But he just wasn’t quite himself after coming back from that [concussion] injury.

“As Don [Sweeney] mentioned, we’re going to look at every UFA that we have, and RFA, and come to conclusions on whether or not it makes sense for us to move forward with those players.”

At the moment, the Bruins look fine when it comes to cap space in the offseason. But is it worth taking a gamble on a player like Rick Nash? Not really.

A stronger case can be made for Riley Nash (who should have won this season’s 7th Player Award).  Riley Nash became the B’s Swiss Army Knife of forwards, playing in all four lines at some point during last season. The biggest problem for Riley is that his career season may have priced him out of the TD Garden.

It will certainly be an interesting free agency period in Boston, that’s for sure.