Could The Bruins Make A PK Subban Trade Work? PK Subban is a name very well known amongst the Boston Bruins and their fans, mostly from his time with the Bruins’ greatest rival, the Montreal Canadiens. Subban has scored a numerous amount of massive goals against the Bruins over the years, especially in the playoffs. However, since being traded to the Nashville Predators before the 2016-2017 NHL season, the animosity towards PK has faded in Boston, and an admiration for him has emerged.

With recent rumors indicating that Predators general manager David Poile will be listening to offers on Subban this offseason, the idea of the Bruins acquiring the right-shot defenseman is worth bringing up.

But how would he fit in?

Putting aside salary cap issues and the Bruins current difficult contract situation with their younger players, Subban would fit in seamlessly on a team that combines youth and veteran leadership to play a fast, physical, exciting brand of hockey. If Subban were to be described using just three words, fast, physical and exciting are the first three that come to mind. He is an incredible skater, which allows him to be a two-way defenseman who can be active at both ends of the ice. He’s one of the best in the business at leading an intense rush and breaking out of his own zone. He’s scored multiple breakaway goals in his career and has used his speed to create a hole in the opponents’ blue-line defense.

Fast doesn’t describe just Subban’s skating. He has an absolute rocket of a shot that he’s tickled the twine with quite a few times, especially on the power-play. Here are a couple examples:

The excitement is always there in his game, it is shown through his celebrations, enthusiastic interviews, physical play and desperation to be on the ice for every big moment in every game. The man just loves the game and wants his name on the Stanley Cup. He brings an unreal amount of excitement to the sport and is a great personality both on and off the ice, having donated millions to hospitals and spending time with many different groups and charities.

Subban loves to use his whole body to make a hit, it’s why he’s one of the better and more well-known hitters in the NHL. Here’s just one example of one of his crushing hits at the blue-line that he’s become famous (and sometimes infamous) for:

It’s safe to say that Subban would only add to what is already a deadly Bruins power-play, likely playing on the top unit with Bruins rookie standout from this past season, Charlie McAvoy.

Special teams are all well and good, but most of PK’s minutes would be played at even-strength, so where would Bruce Cassidy slot the right-handed defenseman into the lineup?

Likely on the second pair either on Torey Krug’s right, or Brandon Carlo’s left as Subban is a guy who can quickly adapt and plays all over the ice regardless. Playing his off side would likely cause no issue.

On the ice, it looks that trading for PK Subban would work near flawlessly if Cassidy plays him in the right situations (there is little doubt of the opposite). The real question as to whether this trade could work lies off the ice much more than it does on the ice.

What would the Bruins trade for him? How would he fit into the salary cap?

Both excellent, and fundamental questions. For a player of his caliber, it’s generally assumed that a 1st round pick will be required to make any sort of deal happen, so there goes the Bruins’ highest pick in 2019. Considering Nashville doesn’t have a 1st in 2018, acquiring another one in 2019 would be quite attractive for them. Likely Don Sweeney would need to part with at least one NHL-ready forward and a strong defensive prospect or young regular as well. That forward could be Danton Heinen or Anders Bjork, while the defenseman could be prospects Jakub Zboril or Jeremy Lauzon, or current NHL regular Matt Grzelcyk. Chances are that package of a pick and two players wouldn’t get the job done, and another prospect or 2nd-4th round pick would likely be required.

It takes a lot to get a lot in today’s NHL, and Bruins management would need to be willing to part ways with a significant amount of assets to get PK Subban in a Bruins uniform for the 2018-2019 season.

The Bruins are in a tricky salary cap situation, with multiple key depth players needing a new contract this coming offseason, and many young players all but guaranteed for a pay raise in the next couple of years. Here’s what the Bruins current roster looks like via CapFriendly.com: 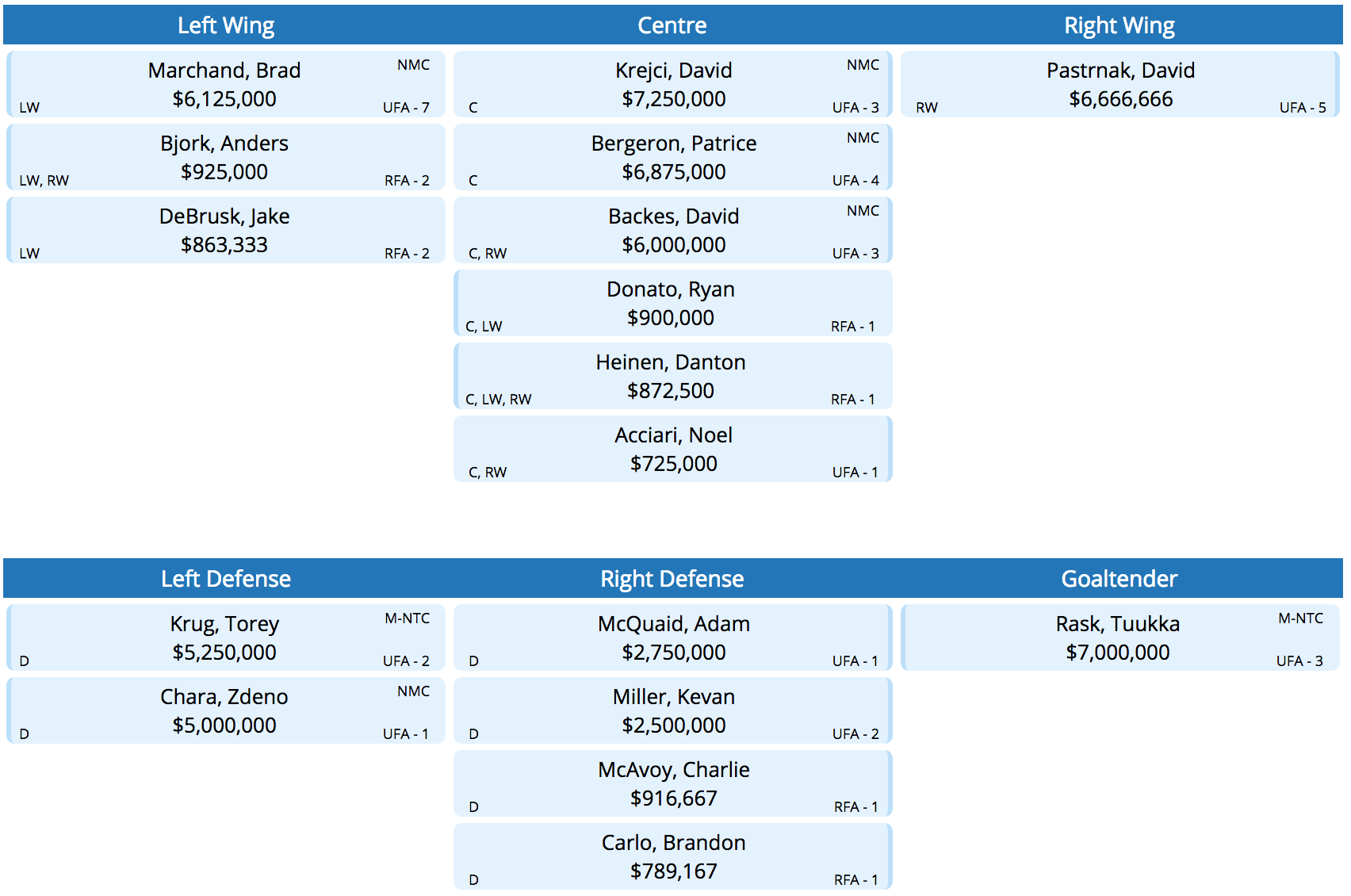 The Bruins are likely to be right around the ceiling of the salary cap once players are resigned, and extensions are signed for the coming years, which makes it challenging to fit Subban’s $9 million contract over the next four years under the ceiling. It would require significant dumping of salary and some hometown discounts for players looking to stay in the black and gold.

It’ll be difficult, and it may not be the most likely of scenarios for this offseason, but Bruins management is a smart group. If Don Sweeney can find a way to finagle a solid deal and fit Subban under the cap, he’ll pull the trigger on it, and PK Subban will be the newest Boston Bruin.

Will it happen? Only time will tell.