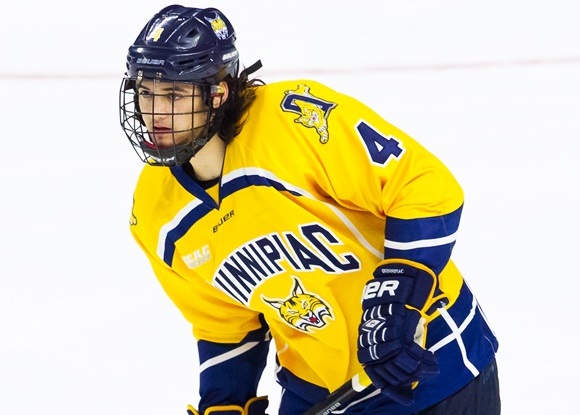 Clifton first played with the U.S. National Development Team during the 2011-12 season. In eight games he contributed with a goal and earned a plus-minus rating of minus-two.

That same season, Clifton played with the Jersey Hitmen of the EJHL. In 28 games he registered one goal and 11 assists, earning 46 penalty minutes.

Clifton rejoined the U.S. National Development Team during the 2012-13 season, appearing in 25 games. This time around, the defenseman potted three goals and six assists and maintained a plus-11 rating.

Clifton was drafted 133rd overall by the Phoenix Coyotes during the fifth round of the 2013 NHL Entry Draft. Eventually, however, the defenseman decided not to sign a contract with the Coyotes.

The Coyotes wanted toughness. They got it in Connor Clifton. "I'm on cloud nine." pic.twitter.com/1hOhhxTlr9

He then attended Quinnipiac University to play hockey for the Bobcats. Judging by his performance with the NCAA Division I team, it is no wonder Clifton had the confidence to test the waters of free agency.

Having attended Quinnipiac University myself, I got the opportunity to watch Clifton in the latter two years of his collegiate career. The now 23-year-old captained the Bobcats during his senior year, a season in which he tallied seven goals and seven assists in 39 games.

The blueliner has the ability to pitch in offensively while simultaneously finding strength in his own zone. Clifton is also well known for his physical play, throwing hits whenever he is given the chance.

During his junior year, Clifton had his best season in terms of offensive stats, notching seven goals and 21 helpers in 43 games. The defenseman accumulated a plus-20 rating. Throughout Quinnipiac’s playoff run that season, Clifton had four multi-point games.

The most prevalent downside to Clifton’s game can be a lack of discipline. Consider this hit back in 2016:

However, Clifton seems as though he is getting this under control. In his freshman year, the defenseman accumulated 106 penalty minutes in 36 games. Comparatively, Clifton only gathered 35 penalty minutes in 54 games during his first season with Providence.

Throughout his career at Quinnipiac, Clifton put up 19 goals and 37 assists in four collegiate seasons.

The New Jersey native has been a solid addition to the AHL Bruins. Clifton appeared in 54 games with Boston’s AHL affiliate during the 2017-18 campaign, pitching in offensively with four goals and nine assists. He also maintained a plus-minus rating of plus-11.

Clifton has what it takes to make to the NHL, whether that winds up being with the Bruins or another team. A Bruins comparable is Kevan Miller or Adam McQuaid due to his toughness and willingness to be a physical force. However, Clifton has more of an offensive upside.

The defenseman will have a shot at cracking an NHL team’s bottom pairing. Look for him to gather some attention at development camp this summer.

Will Clifton make it to Boston next season? Probably not – he still needs time to continue growing his game in Providence. But it is very likely that you will see him skate on NHL ice before he calls it quits.