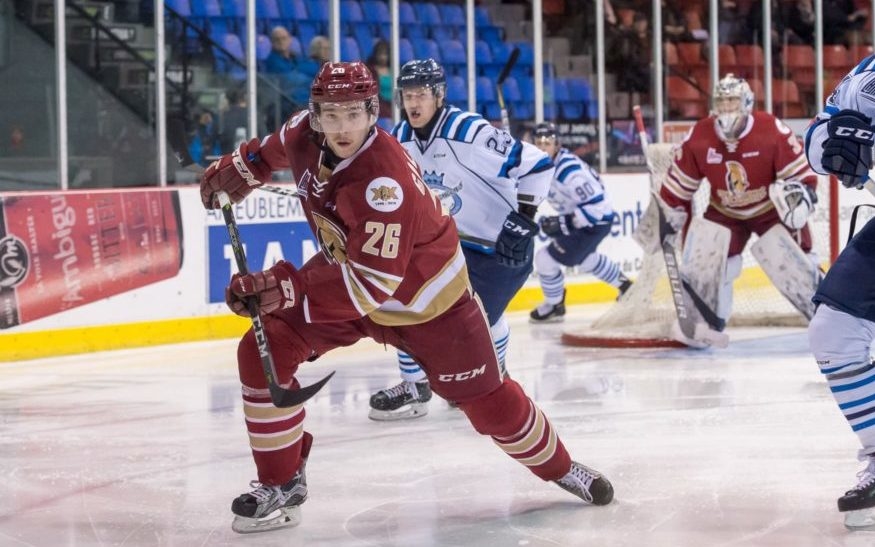 There are two things in the National Hockey League that often just do not mix – the Boston Bruins and the Montreal Canadiens. Throughout the storied history of both Original Six franchises, moves have been made that is agreed upon by both sides such as Ken Dryden to the Habs or even Claude Julien to Montreal in most recent years.

However, there have been very few occasions where the Bruins and Canadiens experience any sort of betrayal from a player. Well, on June 27th, 2018, the Montreal Canadiens may have very well felt that betrayal when Montreal, Quebec native Olivier Galipeau denied the opportunity to play in the Canadiens’ development camp and agree to a one-year AHL contract with the Providence Bruins.

Olivier Galipeau is one considered a veteran of the Quebec Major Junior Hockey League, playing in five consecutive seasons with three different teams. The overage defenceman has created a solid reputation with scouts and analysts as one of the best offensive defenders in the QMJHL.

The Montreal-native kicked off his QMJHL career with the Val d’Or Foreurs. In the next four seasons, he would continually produce decent season totals, finding his best hockey in the final two seasons with the Foreurs. In the 2015-16 regular season, Galipeau scored nine goals and thirty-seven points in 56 games, adding an impressive +29 rating in the process.

In the short six-game playoff run that same season, Olivier scored only one goal but assisted on eight, finishing the postseason with nine points. The following season would be split between the Foreurs and his new team, the Chicoutimi Sagueneens due to a trade that was made at the 2016-17 QMJHL Trade Deadline.

#QMJHL #LHJMQ CHI/VdO Trade: Olivier Galipeau ends his time with Foreurs 8th in team history in both games (211) and points (92) by a d-man

Because he was captain with Val d’Or, Galipeau was awarded the “C” on his sweater. The second-half of the ’16/’17 season was not the best for him, however, scoring only fourteen points in the thirty games he skated in. In turn, it was the first-half of the past 2017-2018 season that Galipeau truly showed his talents as a defenseman. In just 37 games with the Sagueneens, Galipeau racked up 15-25-40 totals and a +18 rating. The stellar play brought up his trade value heading into the 2018 QMJHL Trade Deadline.

When the trade season began for the QMJHL, the favorites to win the QMJHL Championship make the necessary trades to further solidify their chances on winning the top prize in the Eastern-Canadian junior hockey league. One of the top favorites – the Acadie-Bathurst Titan – managed to land one of the best players in the league for a ton of future draft picks.

The change of scenery did not mean a change in results for Galipeau. In the final 30 games of the year, Galipeau finished with 10-24-34 totals – guaranteeing him first place in defenceman scoring for all of the QMJHL over the entirety of the 2017-2018 campaign. Not only would he have his best career regular season, but his playoff run with the Titan would be stellar as well.

His twenty points in twenty playoff games helped earn the Titan the QMJHL Championship and secured them a spot in the 100th Mastercard Memorial Cup. Galipeau would notch three assists during the tournament, as the Titan would win the Memorial Cup in Regina.

Following his performance in the Memorial Cup, the hype surrounding his name arose. Numerous fans from different fanbases wanted his services, especially the Montreal Canadien fans. To have a young offensive defenceman from Montreal would be a dream come true for many Habs fans, even though he may not earn an NHL roster position with the Canadiens.

The Habs missed out on a local kid #Galipeau

The decision to leave the Montreal camp in favor of signing with the Bruins confuses many people, but according to TVA Sports reporter Mikael Lalancette, he believed that he would be in the Canadiens development camp but Boston came in out of nowhere and offered him the contract late in the afternoon. The Bruins would then send Galipeau on a flight to Boston the next morning.

Credit for the signing could very well be given to Boston Bruins QMJHL scout, Alain Bissonnette, who once spent eighteen years as a head scout in the Q. Bissonnette won a Memorial Cup of his own back in 2012. It is very possible that he noticed something to like, insisting the Bruins to sign him as soon as possible, inevitably “stealing” him from the Canadiens.

While he may not be an immediate difference maker for the P-Bruins, he can add some much-needed depth on the blueline for the years to come. It will be interesting to follow the career of Olivier Galipeau while he wears the Providence Bruins sweater.